“Maple Cottage,” located on Trumbull Street between Hillhouse and Temple, is a remnant of another New Haven. The great American architect Alexander Jackson Davis designed the house in 1836 as part of the plan for an elaborate city envisioned by his patron, James Hillhouse. Maple Cottage was intended to be among the formal mansions looked down upon by the lavish Hillhouse Estate (now Science Hill). While stately elms lined Hillhouse, the “cottages” on side streets like Trumbull had to settle for respectable maples.

Two maple trees still stand outside Maple Cottage. But by the time Yale acquired the house in 1976, previous owners had buried much of the exterior detail under a drab layer of stucco. A notice on the door of the abandoned building announces Yale’s intention to demolish it before winter, and to lay down a parking lot in its place. Yale has found an unlikely ally for its plans in the New Haven Preservation Trust.

Yale administrators have considered Maple Cottage a liability since 1995, when the Center for International and Area Studies left the building for Luce Hall. They kept this sentiment to themselves until February 26 of this year, when Yale President Richard Levin (GRD ’74) and the President of the Preservation Trust Edward Bottomley (CC ’81) signed an unprecedented agreement in a public ceremony in Battell Chapel. Yale promised to renovate four decaying local landmarks, including the derelict Davies Mansion on Prospect Street; the Trust promised to stand aside while Yale sold the Kingsley-Blake House on Trumbull Street and demolished neighboring Maple Cottage.

Signed more than two years after the creation of Yale’s Office of New Haven and State Affairs, the February 26 agreement was one of the notable accomplishments of Yale’s new policy of community engagement. In the following months, however, consensus within the Trust and the local preservation community evaporated, and those opposed to the Trust’s vision of cooperation with Yale coalesced into the Friends of Hillhouse Avenue. Members of this new group suggest that the February agreement merely rubber-stamped Yale’s pre-existing plans, and that the Trust’s directors were railroaded into approval by their own leadership.

Much to the chagrin of the Friends of Hillhouse, the Preservation Trust signed off on a landscaped parking lot as the temporary replacement for Maple Cottage. However, according to recently released planning documents, Yale has higher hopes for Trumbull Street. In a letter to the Connnecticut Historic Commission, the Office of Facilities cited a planning consultant, writing, “One of their recommendations is that this become the primary entrance to Yale, a major gateway to the University and New Haven.” In the long term, Yale promises a new building of similar size and placement. “A more substantial building, housing academic or student administrative offices, if properly scaled, would be a more suitable announcement of the University on Trumbull Street,” according to Yale planning documents.

To the untrained eye, Maple Cottage doesn’t look like much to fight for. However, architectural historian Anstress Farwell insists that the cracked stucco could be peeled back to reveal original 19th century detail. Farwell is an old hand at New Haven preservation activism. Eighteen years ago, as a graduate student in architectural history, she led a group that forced Yale to preserve the Davies Mansion. Still technically a Yale Ph.D. candidate, she now works as a freelance preservation consultant and is the driving force behind the Friends of Hillhouse. Citing the dirty stucco and the metal fire escape slapped onto one side of the building, Farwell blames Maple Cottage’s current state on 20 years of Yale ownership. “This is demolition by neglect,” she says.

The world of New Haven preservationists is a small one, and Farwell first learned about the Trust’s agreement with Yale through Trust President Bottomley, her friend, former neighbor, and current nemesis. The Trust’s Board of Directors had already passed the agreement by a vote of 22-0, but Farwell thought she could convince them to go back to Yale for a new round of negotiations. “The Board was completely paralyzed,” she says. Although the Trust had agreed not to pose any legal obstacles to Maple Cottage’s demolition, nothing prevented Farwell, an independent consultant, from filing the papers that would force Yale to bring its case for demolition before the State Historical Commission in Hartford this September.

By this summer, Farwell’s initiative had evolved into the Thursday night meetings of the Friends of Hillhouse. This ad hoc organization reflects the two types of people who make up the preservationist community: those who own fabulous old houses, and those who make a living from them. Held in the Whitney Avenue office of a real estate broker, the group includes Yale employees and members of an older New Haven elite, as well as professional historians and preservationists. The discussion sometimes digresses into talk of leaky slate roofs, decrepit chimneys, and excessive property taxes, but centers on the members’ shared sense that the Preservation Trust betrayed its mission by signing the February agreement with Yale. Many of the Friends of Hillhouse are members of the Preservation Trust, among them four Directors who regret voting for the February deal. Nancy Baquie, a Wooster Square resident and member of the Trust’s Executive Committee, complains of her exclusion from Bottomley’s discussions with the Trust’s chief negotiator, Robert Grzywacz. “Even I am not invited to the secret meetings,” says Baquie.

Although they are dissatisfied with Yale’s behavior, the Friends of Hillhouse save their strongest words for their fellow preservationists at the Trust. “There was absolute secrecy with no community involvement,” complains Jack Gold, a member of the Friends of Hillhouse who once worked as a preservationist for the city of New Haven. The parties to the negotiations give differing accounts. Yale Associate Vice President for Facilities Kemel Dawkins says, “It’s not clear to me that there was this secrecy,” while the Trust’s Bottomley says that the planning was confidential. “Yale wanted it that way,” he claims.

Yale first made contact with the Trust in October 1996, according to Trust negotiator Grzywacz, an architect who also chairs the Trust’s Preservation Action Committee. In November 1997, two representatives of Yale’s Office of Facilities and Office of New Haven and State Affairs met with Grzywacz. Yale came to the table with plans to demolish two of six properties, and ready to discuss the terms by which the other four would be restored, according to Grzywacz. Months of negotiations produced an agreement that committed Yale to the restoration of the badly damaged Davies Mansion, two decrepit houses on Hillhouse Avenue, and the 18th century John Pierpont House on Elm Street. Grzywacz and Bottomley both pointed out that while they were unable to save Maple Cottage, they did convince Yale to grant a one-year grace period for the Kingsley-Blake House across the street. (It currently houses the Ethics, Politics, and Economics Program.) Yale has agreed to give the structure to anyone who will take it, and has even offered $75,000 toward the immense cost of physically moving an antique house. Significant concessions were also won, according to trust officials, on the details of restoration of the other four properties.

Trust officials like to focus on the February agreement’s preamble, which recognizes that Yale’s academic mission comes first and asserts, “Change is part of a continuously living community.” However, the agreement recognizes that “conscientious stewardship requires…a careful balancing of preservation and change.” The preamble also promises “continued consultation” on the six properties, but Grzywacz called the Friends of Hillhouse’s claim that this clause permitted a new round of negotiations a misunderstanding. Members of the Friends of Hillhouse argue that the agreement lacks schedules and procedures, and that its legal status is questionable.

Many of the Friends of Hillhouse’s complaints center on the role of the Trust’s President. “The plan was sprung on us,” says one Trust Director, bookseller Nolan Smith. Another Director, Jack Gold, notes that Bottomley’s firm has done design work for the University and for Yale-New Haven Hospital. “I think that there are some clear conflicts of interests on the board,” he says.

“I don’t harbor any bitterness,” says Bottomley. “It’s wonderful that there is so much interest in this issue.” He denies having pressured anyone into the agreement. “There was a three-hour meeting,” he says, adding that copies of the agreement were mailed in advance to all board members. As for the charge of a conflict of interest, Bottomley says his professional involvements were never a secret. “It’s hard to be in this town and not have anything to do with Yale,” says Bottomley, a former Whiffenpoof. In the agreement he sees a chance to bring new clout to an organization that has lost more than half of its nearly 1,000 the the last decade, and which has not had a full-time director in years.

The tensions within the preservation community came to the surface at the State Historical Commission meeting in September. The Commission had to decide whether Yale’s proposal to demolish Maple Cottage was “unreasonable” and then forward its recommendation to the State Attorney General for action. Both sides made long presentations; Grzywacz joined Yale representatives and lawyers in vaunting Yale’s record in preserving buildings like Linsly-Chittenden on Old Campus, while members of the Friends of Hillhouse defended Maple Cottage and suggested that Yale had acted in bad faith. Yale Assistant Vice President Michael Morand, who works at the Office of New Haven and State Affairs, characterized the Friends of Hillhouse as paranoid. “There aren’t any great conspiracies at work on this one,” he says. Nonetheless, the Friends of Hillhouse argued successfully that Yale and the Trust had not done enough research to determine the house’s true value. The Commission and Yale agreed that Yale will have until November 4 to assemble an independent evaluation of the house and a more thorough set of plans for the site.

As President of the Trust, Bottomley is visibly proud of an agreement that produced a congratulatory letter from the President of the National Trust for Historic Preservation. It was a step into the limelight for an organization best known for the oval plaques on scores of buildings around the city. And Grzywacz, who also chairs the Trust’s Preservation Action Committee, enjoys the new, more personal relationship he has with Yale administrators after years of being ignored. Grzywacz now meets with Yale officials on a monthly basis. “Very frequently I’ll be called [by Yale] once a week, just an informal telephone call,” he says. Committed to the agreement in writing and in spirit, the New Haven Preservation Trust finds itself standing in for Yale in the battle against an activist wing of the preservation movement.

Divide and conquer. It’s worked for leaders cannier than Richard Levin, and against opponents more fearsome than the New Haven Preservation Trust. But as the preservation community remains divided, Yale finds itself in the comfortable position of having allies as well as enemies in New Haven. Associate Vice President Kemel Dawkins winces at the mention of the many hours that Yale’s new policy of community engagement has cost him. Nevertheless, he continues to meet with members of the Friends of Hillhouse, while his office maintains a close relationship with the Trust. Dawkins is frustrated by the delay in demolition, but he still supports the University’s new direction. “What it demonstrates is Yale’s good intention,” says Dawkins. And it is to the credit of Yale’s new community relations strategy that each preservationist faction speaks of Dawkins with respect. As Yale and New Haven begin to move beyond their cautious overtures, the moment may have finally arrived when New Haven will abandon Yale as an all-purpose enemy, and accept the university as a powerful, if calculating, ally.

Ben Smith is a senior in Morse College.

This article first appeared in the October 9, 1998 issue of TNJ. 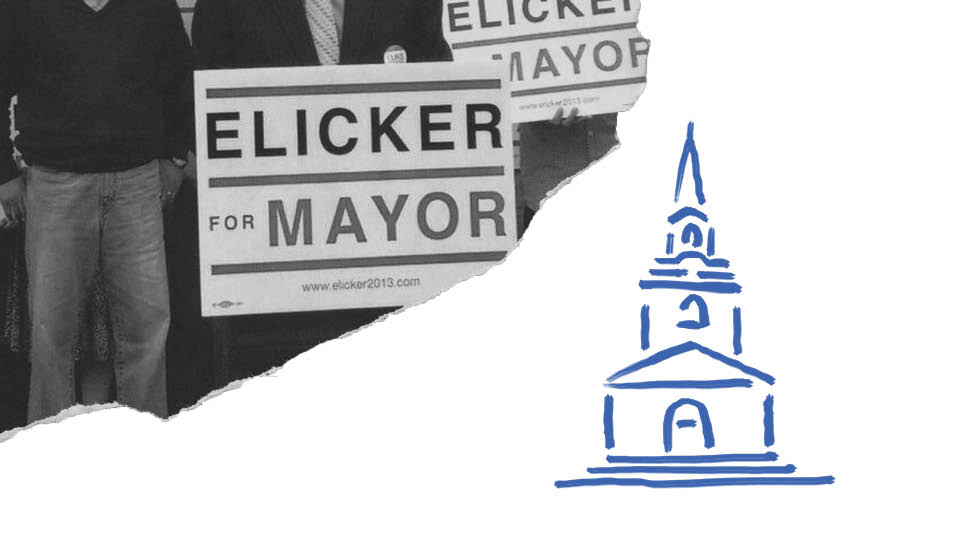