"I’ve never been on a bus before!" said the red-haired toddler
seated across from me. He got up and sat down again on the wooden bench
in excitement. "It’s your first trolley ride," corrected his companion,
a stout black woman. She dabbed her forehead with a handkerchief. But the
toddler was right. Though the machine has the name and visage of a trolley,
complete with red and green old-time shell and clanging bell, its heart
is an electric hybrid bus, built especially for the New Haven Trolley Line
by the EBus Corporation of California.

Mayor John DeStefano Jr. opened the Trolley Line this summer to surreal
fanfare. At the opening ceremony, DeStefano announced, "The charge
is not ten dollars, its not five dollars , its not even one dollar. It’s…"
At this point he opened his arms to a crowd of city, business, and arts
community officials. On cue, they all yelled, "Free!"

Well, not quite. This year’s great white elephant was funded by $250,000
from the Transportation and Community Systems Preservation Pilot Program,
$1,000,000 from the Federal Transportation Administration Bus Program, and
approximately $250,000 from the New Haven community, including the Greater
New Haven Clean Cities Coalition. And when the federal money for the "preserved
trolleys" begins to run dry, New Haven will have to turn to the trolley’s
passengers to foot the bill.

The boy, his guardian, the conductor, and I were the only passengers on
the trolley that Saturday afternoon. We were on the financial leg of the
trolley’s route, a loop that demarcates downtown New Haven: up Whitney to
Orange and State, up Chapel, then down York, Elm, and back to Whitney.

"Those buildings have lots of squares!" The boy pointed over
my shoulder at the banks on Whitney. "Oh, yes. Buildings do have lots
of squares," replied the old lady dreamily. "I am so glad we took
this trolley. We’re so tired and it’ll take us home. A free ride back to
Grandpa’s house. Oh, this is a lifesaver." The trolley let the old
lady and her grandson out at the corner of Audobon and Orange. "This
was fun. Say goodbye to the trolley man," she said as she stepped off.
The boy stood on the corner and waved to the conductor, who rung the trolley’s
bell three times in response. "That’s a loud one, huh?" he asked
the little boy paternally, before closing the doors and continuing down
Orange.

I slid up front and struck up a conversation with the conductor. Frank
was happy to talk and, in a slow drawl, began to tell me about life on the
trolley. We turned left back onto Elm, right on State Street, and left on
Chapel. We passed six trolley stops without another rider. I asked Frank
how many people he sees on a typical day. "Usually in eight hours on
a Saturday you do 60 to a hundred people," he told me. "Which
is not a lot. You get a lot of kids with their grandparents, with mothers
and fathers. They’re the biggest riders." The trolley is currently
free, but Frank expects that when the weather changes, more people will
start riding, and he will have to ask passengers to DEPosit their quarters
in the fare canister by the door.

The trolley pulled up to the corner of College and Chapel. Another elderly
woman and her ten-year-old granddaughter got on. They sat across from me
and I asked them why they were riding. "Oh, for sightseeing,"
answered the grandmother. The granddaughter told me she’s never ridden a
trolley before. (Well, she still hasn’t.) After rounding York and Elm, we
stopped at the corner of Elm and Temple. On the curb, a portly man with
a thick black moustache smiled, reached in the air and pumped his arm, the
universal gesture for ‘pull the bell, buddy.’ Frank stepped on the bell
pedal. Ding-dong. The portly man and the rest of the crowd at the bus stop
cheered and got onto their bus.

The bus blew past us towards North Haven, emitting diesel fumes from its
tail pipe. I wondered what that $1.5 million might have done had it been
put towards cleaning up the real mass transportation of New Haven.

Like the trolleys themselves, the dream behind the trolley was hybrid:
an attempt to marry cooked-up memories of New Haven’s booming past with
a muddled future of economic renewal and environmentally-friendly technology.
It’s sweet and benign, but its nostalgia is no more than novelty, and its
green goals stretch only as far as its route around an apathetic Yale campus
and a gentrified downtown.

"How long we riding this?" the granddaughter asked her grandmother,
as she curled up in the crook of her heavy arm. "Till we get back to
where we got on." The granddaughter pulled on her grandmother’s arm.
"Please can we stay on here till four o’clock?" The trolley pulled
back up to their stop on the New Haven Green and the grandmother got up
and walked to the opening door. "I don’t wanna go, I don’t wanna!"
the granddaughter called out mischievously. The grandmother glanced back
and stepped out the door. "Come on," she said. The girl bounced
on the seat two more times, popped up and scampered out the door. "Thank
you, thank you!" she called out to Frank, who smiled and waved.

I was once again alone with Frank. As we rounded Chapel onto York, Frank
asked me how many times I planned on riding the trolley. A little taken
aback, I replied that I’d be getting off soon.

"It’s okay," he said apologetically. "We’re only allowed
to go around with somebody once. I didn’t know either. I went with some
old guy for seven trips the other day. It was raining, and I don’t think
he had anywhere to go. My supervisor met me at a stop and he says, ‘Forgot
to tell you, but people can only ride once.’ It being free and all."

I got off at the corner of York and Elm. Frank rang the bell and floated
away alone. 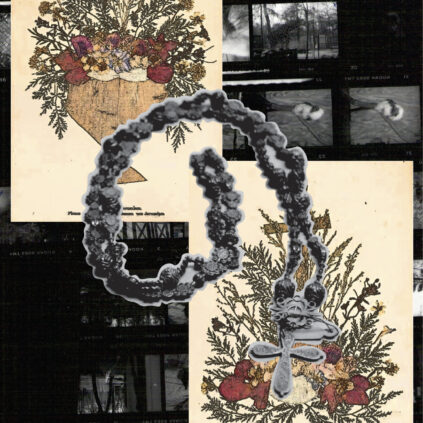