A few weeks ago, I watched from a distance as an eclectic group of New
Haven residents bearing homemade signs and banners gathered on the
courthouse steps to file a war crimes indictment. Their list of alleged
war criminals included George W. Bush, Dick Cheney, Donald Rumsfeld and
Colin Powell, and they were pressing for prosecution.

A greying, unassuming man clad in stained and faded jeans and an old
denim jacket addressed the crowd through a megaphone: ?We are resisting
and showing our protest to the ones in power!? Standing in rows on the
courthouse steps, the participants clutched their anti-war banners in
silence, staring straight ahead solemnly and purposefully. Someone
distributed copies of the indictment, with a list of the country?s most
powerful officials at the top and the Connecticut Peace Coalition of
New Haven?s email address on the bottom. In unison the group read the
entire indictment aloud. Then a few representatives stepped into the
courthouse to present the document to Connecticut?s Attorney General.
?Now we?ll see what they have to say,? someone remarked smugly. There
was applause and a hesitant chorus of ?yays.?

?Sorry people,? muttered a passerby stopping to glance up at the
protesters. I frowned at him, but I didn?t wholly disagree. Neither did
I correct a friend who referred to them as ?those crazies.? But at the
same time, their stance against attacking Iraq mirrored my own. As the
drumbeat for war had intensified over the past few weeks, I hadn?t been
able to shake the guilty feeling that students like myself had a role
to play. Hasn?t it traditionally been up to students to tilt the scales
to the left, to keep the government?s hawkish tendencies in line? And
if the protest movement was in fact my inherited duty, didn?t I share
some common ground with the protesters on the courthouse steps? A few days later, I took one of the white armbands that symbolized my
disapproval of war on Iraq. I dangled the frayed strip of cloth from a
strap on my backpack, carefully positioning it where my stance against
the war would be visible?but not too visible.

At one of the Coalition?s tri-weekly street-corner vigils, Joan Cavanagh
had taken up her usual post, solemnly distributing copies of the
group?s latest anti-war leaflet as fellow members stood behind her with
a banner. A loose tweed coat dwarfed her slender frame; a red knit
beret partly hid her shoulder-length grey hair. There was something
resolute about her silhouette, as she extended her arm every time
someone walked by. At forty-eight, Cavanagh is no stranger to the
anti-war movement. She made her debut as a protester when she was
active in her high school, then she dropped out of college after one
semester to join a collective that was working against the war. She
didn?t go back to school until she was 29. ?I actually have the pride
of saying I was in prison on my 21st birthday,? she told me. ?Most of
my friends were pretty cool with it. By that time they weren?t
surprised,? she explained. ?I had already been arrested six or seven
times and had done jail time for it. My mother wasn?t too happy; what
can you say??

About twelve people constitute what Cavanagh termed the ?core group,?
those who regularly come to the weekly coalition meetings. There are
about 50 members who attend Coalition events, and the group?s email
list has about 300 names. In four years, they haven?t missed a Sunday
on the corner of Broadway, Park, and Elm silently protesting sanctions,
and now war, on Iraq. In the face of New England winters, hateful
accusations and?perhaps worst of all?passersby who don?t even look up,
what sustains such dogged resistance vigil after vigil, week after
week? ?I can?t associate with the US government. I have to actively
dissociate myself,? Cavanagh told me. ?Silence is complicity,? she
continued, likening present-day protesters to Germans who resisted Nazi
authority. ?If everyone had capitulated at that time, what kind of hope
do we have of the human race?? I winced. That?s the kind of comparison
that leaves a bitter after-taste, that makes eyes narrow at the thought
that someone really had the nerve to say such a thing. It?s the kind of
analysis I?m quick to reject.

One-by-one, Cavanagh handed out leaflets to anybody who would take one.
She had already given out 100 leaflets in half an hour, she told me
proudly. She knows many passersby do in fact read the flyers, she told
me, because she often receives responses to them via email. Others
clearly don?t. A few people walked briskly by without looking up. ?No
thanks. Iraq. Hmmm ? See you guys later,? said a man walking by. I
wonder if those who refused the leaflet were wary of what didn?t come
from The New York Times, too wedded to the mainstream to ponder the
possibility of their own indoctrination. Maybe like me, they?ve learned
to parrot the opinions of those with the highest credentials and to
second-guess the chorus from the margins that seems to culminate in a
simple refrain: If The Government is behind it, it?s corrupt, no
questions asked.

But my faith in the system is instinctive, not intellectual.
Rationally, I realize that those cloth banners are about individual
issues more than subversion for its own sake; I believed one of the
coalition?s members, when he vouched that he doesn?t ?pick a side ahead
of time,? and I respected his and fellow protesters? willingness to
challenge what they read. But my fear of being a dissenter must die
hard, for I secretly hoped no one I knew had seen me standing beside
Cavanagh, holding a piece of the anti-war banner.

It was a Sunday afternoon, and 14 people had shown up to protest on the
corner of Broadway, Park and Elm. Cavanagh stood a few feet away,
distributing flyers. Just across the street, a man dressed in an
American flag costume and fiercely waving an enormous flag danced
across his strip of sidewalk shouting against the cacophony of honking
cars. ?Saddam Hussein! He is a poacher! Let?s kill him now!? he cried,
addressing the anti-war protesters. ?And you support him! USA!? The
anti-war protesters glanced up at him every once in a while, but didn?t
budge.

?It?s a matter of increasing numbers,? Joan said to me. ?As the numbers
increase, the impact increases.? So the government really notices?
?They hear it,? she said. ?They know it?s out there.? When it comes to
protesting, numbers make a dual statement, directed both at the
government and at the people. ?I feel there?s a lot of people [who]
unfortunately need reassurance that they?re not the only ones who are
against what George Bush is planning,? said a Coalition member named
Paula, a freelance writer and poet. She hopes to provide that
reassurance, she explained, by ?standing out in the street corner with
the signs and slogans they have in their hearts but they?re not ready
to show.? A lot of people thank her for what she?s doing, she told me.
?I say, ?why don?t you join?? They say, ?well I?m glad you?re doing
it.?? I shook my head in disapproval, at the same time fully
recognizing that she?d described me to a t. I resolved to change.

There?s something exhilarating about crowds, especially when they number
in the hundreds of thousands like the one in Washington, dc, a few
weeks after my initial encounter with the Coalition. ?There?s no power
like the power o? th? people ?cause the power o? th? people don?t stop,
say what?? I was jumping up and down as I shouted with the crowd. ?This
is what democracy looks like! That is what hypocrisy looks like!? we
cried gleefully, pointing from ourselves to the White House beside us.
It was a celebration of the First Amendment. As far as you looked, all
you could see were protesters and their signs. For a few hours, I
believed we were a force to be reckoned with; I believed in ?the power
o? th? people? and ?what democracy looks like.? We were living it.
Maybe that?s how the coalition members felt when they delivered the
indictment to the State Attorney General and sat back to wait for the
trial to begin. I wondered how I?d once mocked the cardboard signs of
the Connecticut Peace Coalition and marveled that it had taken me so
long to truly comprehend the power and the imperative of resistance.
?The people! United! Will never be defeated!? we shouted rhythmically,
and I believed it. It was my job to put that truth into action. As the
numbers increase, the impact increases. And silence is complicity.

In the middle of the day, swept up in the anti-war fervor, I removed my
white armband from its inconspicuous position on my backpack and asked
a friend to tie it around my arm.

But the magic was fleeting, and shortly after my return, the torn piece
of cloth was relegated to my desk drawer with a promise to retie it
that I have yet to fulfill. In fact, the protest at the capitol already
feels like a distant memory. A Yale student and Coalition member I
befriended on the bus to dc asked me afterward if it I would attend
more large-scale protests like it. I didn?t have to pause much to
answer in the affirmative, and I haven?t changed my mind. I guess I
have no trouble protesting when thousands of people around me are doing
it too.

Yesterday, I attended one of the Coalition?s street-corner vigils for
what might have been the last time. That day?s banner read ?No us
Military in Iraq.? I couldn?t agree more wholeheartedly. And I don?t
think they?re a bunch of ?crazies.? I respect their conviction of their
own accountability in us foreign policy, their courage in challenging
the mainstream, and their determination to display their resistance to
the people and the government person by person, week after week. I
considered volunteering to spend a few minutes holding up a corner of
their worn, cloth banner. But after hanging around for a few minutes, I
decided against it and left.

Erica Franklin is a sophomore in Jonathan Edwards College. 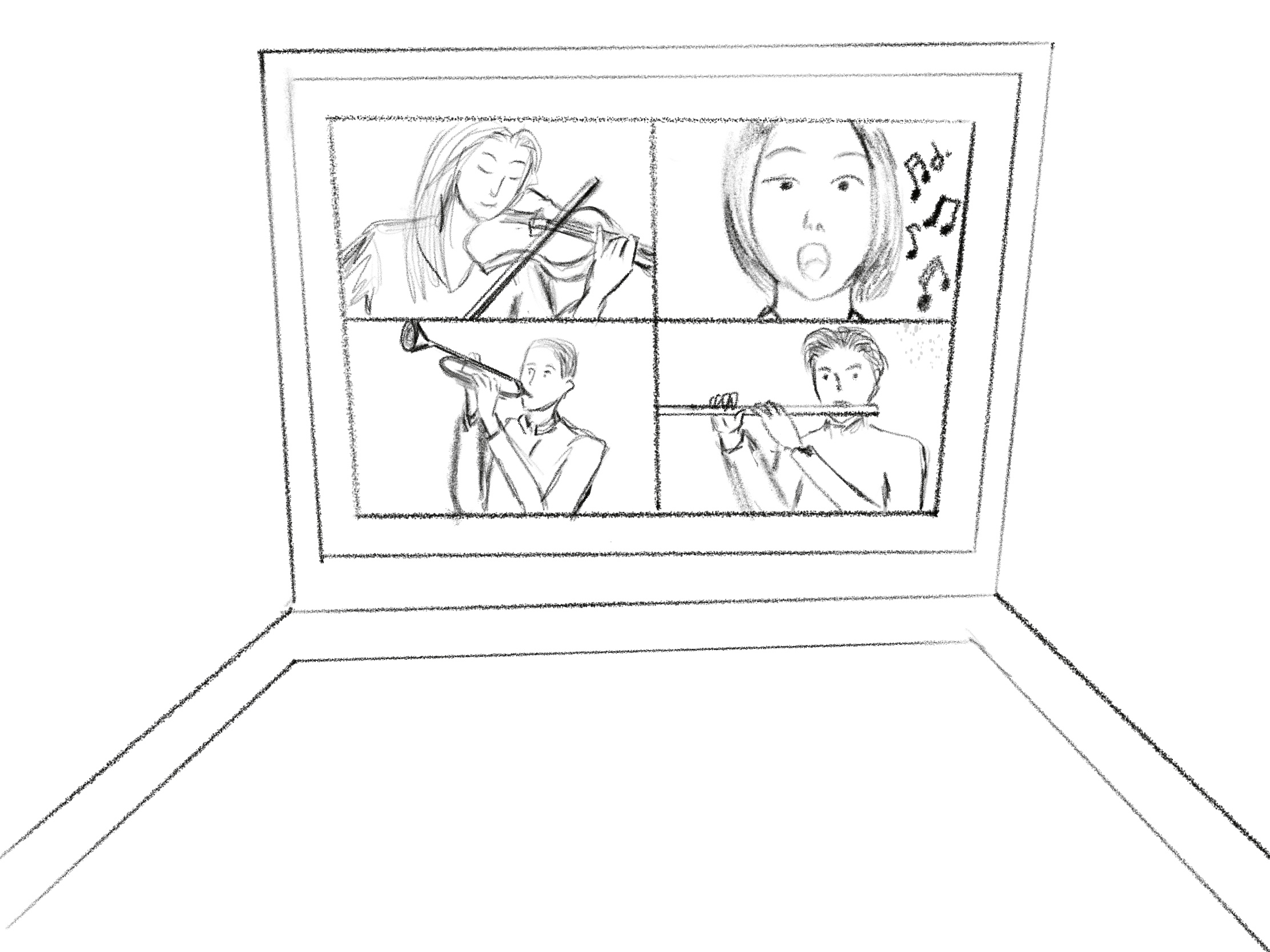 A Special Type of Relativity