Waiting outside Never Ending Books at 810 State Street one Saturday afternoon, I saw how the store gained its local nickname, “Never Open Books.” Its red-screened door, I was told, hadn’t opened once all week.

Owner Roger Uihlein does little to alleviate the mystery of the closed storefront. Press-shy, he cannot be contacted by phone. Aside from regularly scheduled live events, business hours follow Uihlein’s whims. “He likes to be elusive,” said Brad Jacobs, who runs the store’s open-mic concert series and whose cell phone is listed as Never Ending Books’ only means of contact. Just to speak with Uihlein, I sat on the pavement outside the store for four hours.

Outside, just to the left of the door, a small built-in bookshelf sports an assortment of works. A handwritten sign in the opposite window reads: “All books, records, CD’s (etc.) are FREE. Please feel free to leave a donation (large or small)! With much appreciation, Never Ending Folk.”

Uihlein and his young son arrived to unlock the place around four p.m., and I entered. A single person could just barely pass through the labyrinth of towering shelves and stacks of crates and boxes near the storefront. The variety inside was even more pronounced than that of the small collection kept outside. Browsing, I found a copy of Shakespeare’s Much Ado About Nothing alongside a thick book entitled Gem Elixirs and Vibrational Healing, Vol. 1.

Customers can take or leave whatever and however many books they want. “People come in and they assign a value to the book and donate what they want,” Uihlein said. 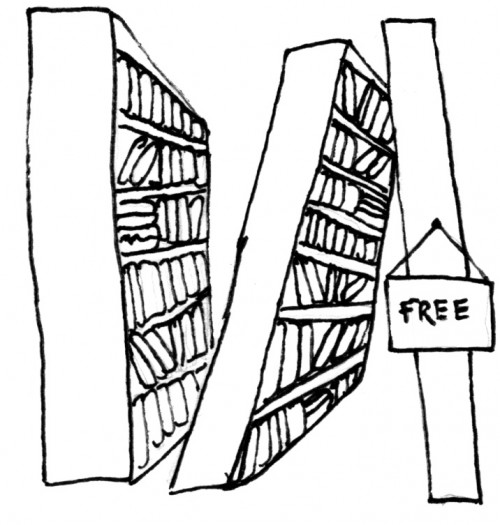 Never Ending Books started as a little bookstore called Books on State Street, Uihlein explained. He passed by often and would see a man sitting in a wicker chair among small, three-foot-tall bookcases. One day Uihlein entered the store and spoke with the man in the window–Frank Caso, the space’s owner. Caso told him that the business was failing and Uihlein decided to help out. He supplied more shelves left over from a carpentry job—he worked in carpentry at the time—and gathered a community to brainstorm and ultimately name Never Ending Books.

New Haven has already seen a decline in independent books sales—Labyrinth closed last year and Atticus and Book Trader are sustained largely by their cafes. Without the publicity and local backing of nonprofit and book bank New Haven Reads, the crowd drawn to Never Ending Books is necessarily self-selecting. It remains even more of a wonder that Never Ending Books has maintained business. By encouraging the physical experience of reading, Uihlein said he aims to support the cause of the entire book industry.

The financial operation of the space remains shrouded in as much mystery, if not more, as the store’s hours. A donation jar on the countertop of the kitchenette in the back contains some crumpled bills and a great deal of change. Behind this, out of sight, are some offices, such as those of the Rainbow Recycling Company, one of the main financial contributors to Never Ending Books. Uihlein is not willing to divulge much about how he has kept his store running for the past twenty years. “I also use the office space here,” he said. “So I consider myself to be responsible for contributing substantially to the rent.”

Through a door to the right is a second room used as a musical performance space and art exhibit. In addition to hosting musical performances, the space often holds community gatherings like meditation circles, casual political discussions, and even a girls’ bicycle repair club.

During events hosted on the last Saturday and fourth Friday of every month, Never Ending Books comes to life as dozens of musicians, poets, and other artists gather to share their work. Uihlein invited me to read some of my own poems that night. Sharing my work felt completely natural in the relaxed space. Toward the end of the evening, everyone simply played together — piano, harmonica, guitars, and voices blended together into one.

“This place is special to me,” Uihlein said. “It’s like my own version of college. I’m receiving my own education from the musicians and artists and other people who come here.”

I can’t help thinking that, even if books without end is a wishful thought, this store’s community and creativity do not have to come to a stop.