In Navajo, the phrase “I want to weigh you” translates directly from English into “I want to hang you.”

Some elderly members of the Navajo tribe still laugh about the old misunderstanding, but for Chris Brown ‘15, it represents the need for doctors that speak the Native American language.  When he was younger, Brown witnessed the poor healthcare his relatives, especially his grandmother, received on the reservation from doctors who did not speak the language. He resolved to return to a Navajo reservation as a doctor and help the elderly, many of whom do not speak English, receive adequate care.

Navajo is not taught as a language at Yale so Brown applied to Directed Independent Language Study, or DILS.  DILS offers the opportunity for students to work one-on-one with a “language partner,” a native speaker that guides them through their independent study of the language. For two hours each week, Brown has a Skype conversation with his language partner Jolyana Begay, a professor at the University of Arizona.

Popular DILS languages are less widely useful than languages like Chinese or Spanish, and the languages that trend in DILS projects are telling of cultural and academic patterns at Yale, in New Haven, and in the country as a whole.

Trends in the popularity of languages taught in the classroom evolve slowly in response to changing political and economic balances between nations. Only the largest political and cultural shifts seem to make a mark. The popularity of Russian spiked during the Cold War. In the 1990s, students took interest in learning Japanese during Japan’s period of economic prosperity. More recently, in the post-9/11 era, Arabic has become more popular.

DILS is a sensitive barometer that gauges the popularity of lesser-known languages, said Nelleke Van Deusen-Scholl, director of the Center for Language Study.

The program is more responsive to micro-trends in the interests of the student body, and not necessarily sweeping geopolitical trends. After the Haitian earthquake, more students wanted to take Haitian Creole through DILS. Cantonese is currently one of DILS’ popular languages. According to Gleason, a large number of students who grew up speaking Cantonese at home who have no other way to study the language. On a campus where many students are uncertain about their interests, DILS is a small, self-selecting program. 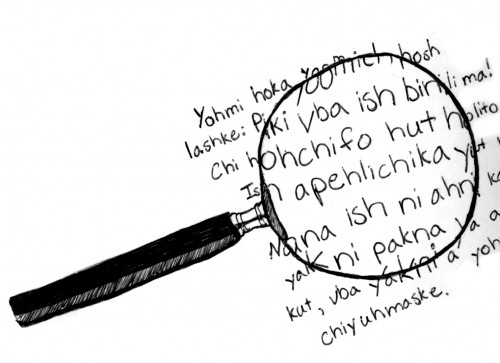 Chelsea Wells ‘13 took Choctaw through DILS in the fall of 2011 as a way to connect to her heritage. Wells’ motives for learning Choctaw reflects a larger trend toward the celebration and conservation of less widely spoken languages. Her language partner was a woman from her hometown in Oklahoma, and Wells said it was great to learn from somebody from the area in which the language was spoken.

“Very few young people in the Nation speak Choctaw,” Wells explained. Her great-grandfather spoke the language, but did not teach it to anybody because of stigma against Native American languages. Wells views her study of Choctaw as a way to affirm that the language is a positive part of the culture. Though she says her studies were not necessarily practical, they fulfilled her in other ways.

But some do choose languages to match specific professional goals. Justin Hunter Scott GRD ’13, an African Studies student, took Twi, a Ghanaian language, through DILS so he could travel to Ghana if his plans to do research in Nigeria did not work out. Similarly, Alexa Little ’15 is studying Nepali through DILS with language conservation in mind, since she hopes to pursue a career conserving endangered languages in villages in the Himalayas.

DILS director Angela Gleason also explained that while selection of a student for DILS is based on merit, the number of students that can be accepted to study each language is somewhat dependent on the amount of money set aside for that language. European languages like Armenian and Hungarian tend to receive the most funding.

However, the logistics of tracking down native speakers of the language to serve as language partners can prove difficult. The partners are crucial since, as Ravi Pokhrel GRD ’13, a DILS language partner in Nepali, explained, DILS is less a class and more a series of conversations. Wells discontinued her study of Choctaw this fall because her language partner retired, and DILS could not find a replacement for her. Scott similarly had difficulty finding a Twi speaker to mentor his independent learning. The challenges of executing DILS limit who completes it successfully.

The small size of the program contributes to its low profile on campus. Applications for the spring semester are also due several months before the end of the fall semester, meaning a lot of students do not know about the program until after the deadline, Brown said. Students can only take DILS for four semesters while at Yale, an unfortunate limit for those trying to keep up with a language for a post-graduation goal.

If there is enough interest, languages offered through DILS can transition to Yale’s standard course offerings, though there are many other factors involved in that decision. In part due to a high demand for Dutch, the administration set up a program in the summer of 2011 and offered two levels of the language this fall. Through DILS, students reflect a body of smaller, diverse interests and help Yale stay relevant.

And, as Brown knows, relevance is power. He hopes to make being a doctor on a reservation more relevant. In the Navajo language, cocaine is represented by collage of words, a description of white crystals that you snort. “A lot of elderly people see their grandchildren and stuff using cocaine,” he said. Unless their doctors used a traditional method of explanation, they would have trouble getting that across. Communication is key.