An Interview with Ted Hoagland 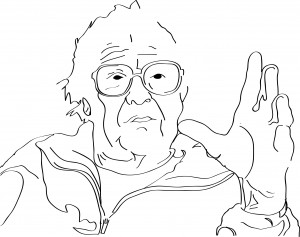 On January 2, Ted Hoagland sat down with me in his house in Martha’s Vineyard. Our conversation ranged from his work with animals in the circus as a young man to his travels to places including Alaska and the Sudan—and his writing process. For six decades Ted Hoagland has keenly observed the intersection between the natural world and the constructed one. A member of the American Academy and Institute of Arts and Letters, Hoagland has received numerous awards including a National Magazine award and two Guggenheim Fellowships. His contemplative essays often dwell on the disappearance of nature and animals in daily life—what has been called “the end of nature.”

Juliana Hanle: As an author of more than twenty novels, essay anthologies, and works of non-fiction, what advice would you give to aspiring writers?

Ted Hoagland: I’d emphasize finding what you love and seeking it out, because you’ll find that there’s not a whole lot of competition for what you love.

And when I wrote [Notes from the Century Before], that travel book in British Columbia, there was no one else doing that. The year was 1966, before all the development, all the logging, had screwed up what was virgin when I was there. There wasn’t anyone else travelling around. There was no competition.

The book I wrote about Alaska is very different from [essayist John] McPhee’s primarily because mine is a love story. I fell in love with a nurse there who was in charge of all the tuberculosis in the state—in charge of patient care. We landed on rivers in floatplanes and on snow in ski planes. There was a lot of hostility toward white people in a lot of these villages, so if I had landed there alone I would have been beaten up. It’s a joyful book; it’s very personal.

When you find out what you’re interested in (and I’m not talking about scientists here), for an artist, when you find what you love, there’s no competition. It’s just yourself.

JH: In the essay collection Sex and the River Styx you write, “dissent is essential.” How would you suggest incorporating political dissent into journalism?

TH: I wouldn’t want to be a newspaper reporter. One of their founding principles is that they have to interview everyone in a non-partisan way without insulting them. If I’m interviewing someone whose views I find repulsive I don’t want to have to keep a neutral face and ask a neutral question and then write down an answer that I find offensive.

JH: So, if you use the tools of a magazine essayist to write a story about a particular issue, could you do the same thing as an activist?

TH: I write angrily and powerfully as best I can on the end of nature all the time. I mean, it’s not going to accomplish anything—I understand that. If it’s in The Nation it will be read by 60,000 people or something. It won’t win any votes in Congress. It’s not going to reverse sea rise or save the rhinoceros or elephant from the ivory trade. But at least I’m speaking out.

JH: Is writing about the end of nature inherently hopeless?

TH: It’s complex. For the red wolves that I’ve written about, for example, it’s very sad. It’s an elegy and the ending does fit my title of “Lament the Red Wolf.” But on the other hand, the title of my short story “The Final Fate of the Alligators” turned out not to be accurate. You know at that time in the seventies it seemed they would be extinct because it was legal to hunt them for their hides. But organizations like the Audobon Society, World Wildlife Fund, Sierra, and the Wilderness Society managed to pass federal and state laws to stop the hunting.

JH: Around 1969 you realized you were an essayist not a novelist—what was that process like?

So I looked on a globe of the world and I found a town called Telegraph Creek in northwestern British Columbia. I found this little town, it had two hundred people but it showed on the map because it was the only town for hundreds of miles around. It was only reachable by riverboat, 165 miles up river. I didn’t make any preparations, because that’s part of the story, you parachute in, so I got off the boat and told people, “I need a place to stay.”

I worked eighteen hours a day. These interviews were so rich and wonderful and fascinating that I realized, “This is so good that I should just focus on this journal. If I go back to New York and try to convert this into a novel I’ll just screw it up.” I was smart enough to realize that this book should not be sacrificed to some future dream.

As soon as I finished [Notes From a Century Before], instead of picking up my pen to write a great American novel, I started writing essays about New York. I wrote about my neighborhood in Greenwich Village. I wrote about tugboats. I got the publicity guy to let me spend two weeks on a tugboat, night and day.

In fiction you invent the world; in essays you describe the world.