The Syn is Dead/Long Live the Syn

As a spectator of the burgeoning activism scene on campus, I’ve been struggling to keep track of the major players. Groups and causes at Yale have high turnover rates, and I’ve learned the hard way that it’s best not to get too attached. After all, it’s tough to have one’s heart set on Occupying Morgan Stanley when everyone else has long since begun Pushing for Divestment.

But this year, I forgot about my pledge of disengagement. I chose to champion the Yale Syndicate, an underdog group with what I hoped was just enough audacity to successfully patch the university’s various wounds.

I cheered when its tiny rabblerousing army orchestrated a walkout of Rick Santorum’s debate with the Yale Political Union on “traditional marriage.” I felt I could trust my damaged heart with the artistes who had manufactured a zine the Yale Herald deemed “Best Rival Publication” earlier this winter. They vowed to save me — and fellow campus sinners —from the temptations of “unjust power, despondent apathy and paralyzing complacency.”

But, as I learned in the last several weeks, the Y Syndicate is dead. Or at least in a deep coma, lacking nearly all vital signs of life. Don’t worry: the process was slow, but not painful. In fact, they barely realized it was happening. Or maybe the Syn hasn’t died so much as dissolved. The solvent was time, and maybe a dash of apathy—along with over-commitment.

Perhaps it’s best if, like most of the campus, you were only marginally aware of its presence. Fewer to mourn its inopportune passing.

In mid-March I spoke with the student collective’s leaders-by-default Carl Chen ’13 and Marc DeWitt ’15, along with a few others, in order to perform its last rites—a verbal autopsy of sorts.

We began with its birth. The group started in the spring of 2012 as a circle of four or five students frustrated by a perceived neoliberal status quo and seeking a space for radical leftist intellectual discussion. They individually “brewed on that for most of the summer” and returned in the fall ready to christen their shared anger, Chen told me.

The term “syndicate” comes out of the anarchist branch of anarcho-syndicalism, which rallies an underclass to band together to control its own fate. Y Syn wanted an organizational structure that was similarly “kind of collective, kind of union, but a little more autonomist and horizontal,” Chen said.

Like their namesake tradition, they aimed to avoid power’s corruptive tendencies.

“We didn’t want a place at the table,” DeWitt clarified. Unlike fellow activist group Students Unite Now (SUN), Y Syn wanted to deconstruct powerful institutions like Yale without forming new ones. It was the perfect set-up: a near-impossible challenge, a greedy corporate archenemy, and a healthy rivalry.

In the beginning, things worked. They held assemblies that netted as many as fifty members in front of Beinecke Plaza’s war memorial. They invited professors to speak with them, including political scientist Jim Sleeper, known for his scathing criticisms of many Yale administrative decisions. They even kept up a website until late September.

Nick Leingang ’13 was most involved with the process of creating the zine—a homemade, collage-style publication common in activist circles. He solicited submissions from friends with similar political leanings to “revitalize public discourse,” the Syn’s stated goal.

But their attempts to move from discourse to public action hit a roadblock: how could they turn their idealized alternatives into concrete solutions?

“Can you live out…theory?” Chen asked. The simple answer is: probably not. Especially not while at Yale. But I can see the appeal of setting vague goals and taking a meandering path to meet them.

Thinking about that path, I get a flashback. A grassless lawn, a sea of tents, huddled bodies. Occupying. A 2011 New York Times article described Occupy Wall Street as a protest movement with “faulty aim,” a “lack of cohesion,” and a “wish to pantomime progressivism rather than practice it knowledgeably.” And that was a relatively tame critique, before the protesters slunk out of their encampments and out of the major press.

Both leaders were familiar with Occupy’s well-documented pitfalls, but Chen says they wondered if they could be the ones to get a little closer to closing the gap between theory and reality, as students “in a safe space with a lot of time.”

And when President Richard Levin announced his departure, the presidential search proved to be good for a test drive.

Both Y Syn and its friendly competitor SUN petitioned for transparency in the process. While Y Syn tried to “create its ideal world,” SUN’s approach to activism was more “direct,” Alejandro Gutierrez ’13 said. The group rallied students to speak with the search committee at an open forum.

But a forum was a little too formal for Y Syn’s style. No wheedling for change—they wanted action. And they wanted it to be “playful,” DeWitt said. SUN was angry with the university administrators for excluding student voices, but Y Syn never expected anything better from them in the first place.

In late September, SUN and Y Syn started a petition on change.org that received almost four hundred signatures from across the community—albeit of a community that includes eleven thousand current students. At the open forum on September 28, students expressed their grievances to the search committee for over two hours. Earlier that day, Y Syn members chalked classrooms in Harkness Hall and Linsly-Chittenden Hall with “playful, but critical” slogans, to encourage the student body to attend the meeting, DeWitt said.

In early October, they placed empty wooden chairs on Cross Campus, Old Campus, and Beinecke Plaza, with signs taped to them that read “The Empty Seat of Student Representation in the Presidential Search Committee.” A photo of one of the chairs made it into the Yale Daily News’ Cross Campus section. Presumably, students passed by the grouping on their way to section that Wednesday night.

This initiative, like other Y-Syn public actions, DeWitt clarified, was not “endorsed democratically by the Y Syndicate assembly.” The organization was founded not to strictly organize students in the traditional sense, but rather to encourage participation in proactive and reactive critiques of the university.

A month after the chairs were placed, the Yale Corporation chose Peter Salovey as Yale’s new president.

Famed Yale anarchist James Scott theorizes in his 1985 work “Weapons of the Weak” that powerless people use small rebellious acts to protect their interests against institutions trying to extract their labor, goods, money, or interest.

If we zoom in so uncomfortably close that Yale is the world and the Corporation is the state, maybe we can see Y Syn’s strategies as analogous to those Scott describes, which include “foot dragging, dissimulation, false compliance, pilfering [and] feigned ignorance.” In the right circumstances, resistance of marginalized peoples can drastically change the course of the state’s decisions and severely undermine oppressive projects.

Without student input, the Corporation may have forgone the safe option and “chosen someone more imperial,” DeWitt said.

Plus the Syndicate’s existence gave SUN a public relations boost, Chen said, preventing either from seeming like “some fringe, marginal sort of organization.”

But Leingang thinks the group’s focus on the presidential search was misdirected, especially since many were seniors, unlikely to be affected by the university’s future president. “Yale faculty, Yale workers, New Haven people should be involved. Our opinions don’t really matter,” he said.

Ultimately, Y Syndicate may have been the wrong vehicle for grassroots activism altogether.

Over this year, Chen and DeWitt said they’ve seen individual acts likely inspired by the Y Syndicate. For example, neither was sure exactly who sent out an e-mail from President-elect Peter Salovey’s e-mail referring to himself as the “President-select,” with the explanation, “It seems that my ‘s’ key was malfunctioning.”

And neither knew who had painted event fliers blue and pasted them on the bulletin boards on Cross Campus. DeWitt suspects it may have been a statement about Yale’s controversial plans for a liberal arts college in Singapore.

Gutierrez confirmed that SUN was not responsible for either action.

For those seeking to continue the trend of sporadic semi-subversive hijinks, Y Syn leaves behind a heaping dose of institutional skepticism, a devil-may-care attitude, and vague plans for more zines. No one I spoke to knows definitively when or whether the group will continue its coordinated efforts. Perhaps when the weather is nicer, they said. 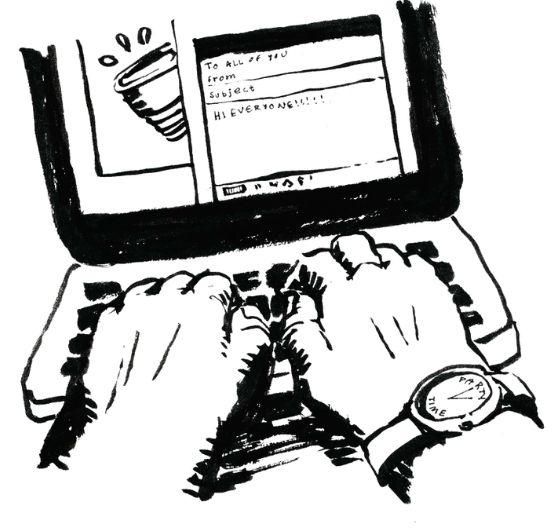 Fun in the Time of Tolerance