When I walk into the large room jutting out of Tony DeLucia’s garage, I am momentarily lost in time. A metallic 1947 Wurlitzer jukebox stares at me from across the room. My eyes pick out a British Invasion pinball machine from the seventies, and a hefty silver-and-bronze Seeburg jukebox from the fifties. The jukebox plays songs like the Wurlitzer and The Crests’ doo-wop hit “Sixteen Candles,” and the pinball machine sits by the back wall beneath a wooden shelf displaying rainbow-colored records, and glass soda bottles. I’ve walked into another decade, but I’m not quite sure which one.

DeLucia strides over to me, his hands casually slipped into his pockets. “Do you mind if I write this down? I forgot a tape recorder,” I explain, and he laughs. “Sure. Why not? I guess you’ll just have to do it the old-fashioned way.”

DeLucia opened his shop, Antique Amusement Services, in Hamden thirty-three years ago, so he knows “old-fashioned” better than anyone else. “I’ve been doing this part-time—all the time—since I was young,” he explains. In the last few decades, he has repaired everything from vintage soda machines to coin-slot arcade games for clients all around the Northeast. He has made a name for himself, literally—people call him “Tony the Jukebox Man.” “It just sort of stuck,” he says.

Here in his workshop are the days of candy parlors, soda fountains, and drive-in movie theaters. Black-and-white photos of smiling quartets in matching blazers and dresses cover the walls; I pick out Elvis but the rest are unfamiliar. I can imagine people coming to Antique Amusement Services, mesmerized by visions of apple-pie America. But as I turn back to DeLucia, I realize he must recognize my brand of nostalgia after seeing it time and time again, the obsession with the proof of the past, indulgences he has learned to treat with care.

DeLucia is the son of a mechanic, and he remembers learning to appreciate his father’s technical and artistic skill. After trade school, he repaired mainframe computers, carrying his father’s work into the modern era. Jukebox machines were his part-time focus for eight years until he left the computer industry to found an antiques company out of his home in Hamden.

These days, he spends much of each day working alone. DeLucia consults with his wife over business matters, but the rest of the time he disassembles, rewires, and repaints old machines. Each one has a motor and an amplifier, though the mechanics and designs often vary. Some need chrome plating while others require specific paint tones and gas pipes. It’s “old equipment, but new and different all the time,” he tells me.

During his busy six-day workweek, DeLucia visits customers in New Jersey, New York, Connecticut, and Massachusetts. “I’ll just about go anywhere,” he says, and his repaired machines have done their own traveling, starring alongside Robert DeNiro and decorating the houses of Whitney Houston and Keith Richards. But, out of the 2,600 clients he works with, most are elderly couples and families. Some people show up every few months; others every few years, for tune-ups. DeLucia likes keeping his business personal.

“Individuals are always better than companies,” he tells me. “It’s easier to work with humans.”

In the workshop, as I take in the time warp around us, DeLucia keeps his eyes fixed on me. He reminds me that repairing antiques is no game: “It’s a job. It’s an interesting job, but it has its headaches too.” Impossible restorations.
Long trips to Manhattan and Massachusetts. Equipment that never arrives.

DeLucia isn’t one to get swept up in memories, but he’s pleased when his customers share his enthusiasm for these clunky, colorful game boxes. It’s the newest generation that gives him the greatest pleasure, the ones who come in with family heirlooms in the trunk. He remembers fixing a jukebox belonging to a customer’s late grandfather, and dropping it off at the Manhattan apartment where the client had gathered the whole family to receive it.

Over the course of a day, DeLucia sometimes tries out the machines in his workshop while on break. He will play a quick game of pinball, or play one of his favorite records on one of the jukeboxes. Then he gets back to his fixing and refixing, the music playing as he works. Though he walks me through the mechanics of various machines, the moments that stick with me are not the names of the parts and their mechanisms, but his own moments of reminiscence.

“It’s a very good feeling,” he tells me, “bringing something back to life.” 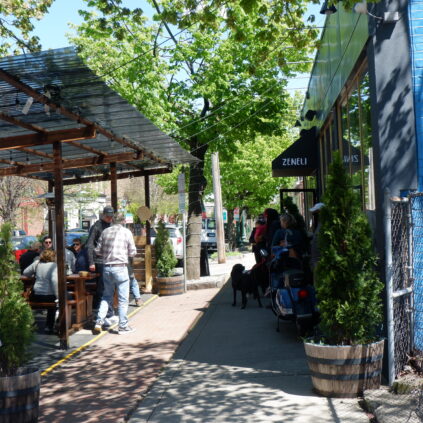