The Bonds That Tie 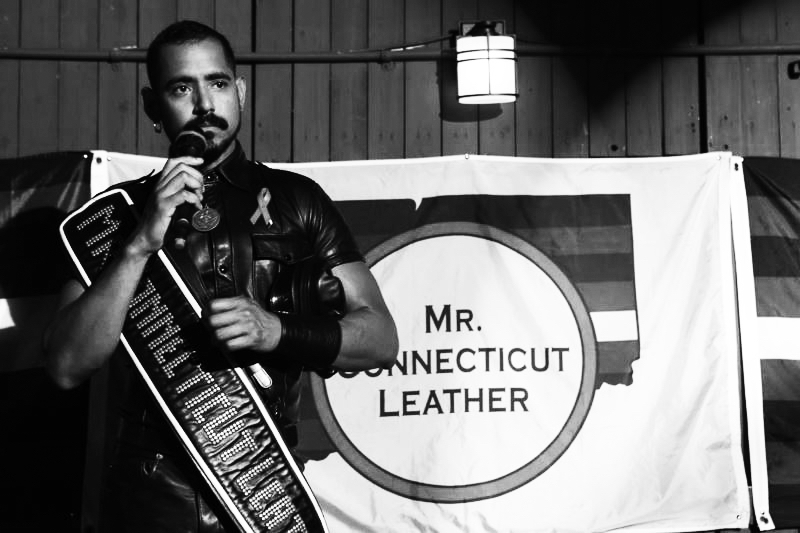 “It’s not just about sex,” J.R. Ramos tells me. J.R. is a bald man with a full, dark beard. His bare, tanned potbelly protrudes from under his black leather vest, which matches his chaps and boots. Most of the other patrons here at 168 York Street Café on the night of September 5 share Ramos’s affinity toward leather outfits that expose a lot of skin. In fact, their common dress code has brought them all together for a weekend-long convention for gay men who have a penchant for leather and BDSM. They’re known as “leathermen,” and they have come from around the Northeast to attend brunches, mixers, a cigar social, and seminars on leather culture. The main event is the Mr. Connecticut Leather contest, an annual pageant begun in the 1970s to select the ambassador for Connecticut’s leather community.

My eyes keep wandering from Ramos to the opposite corner of the room, where a man stands facing the wall with his hands bound above his head. He is shirtless and his khaki shorts are pulled down to his ankles, revealing grey boxer briefs. Behind him stands Rick Jones, a portly man in his mid-fifties with a milk-white Mohawk and boxed beard, who flogs his bare upper back with a cat-o’-nine-tails whip. Jones—whose name has been changed to protect his privacy—augments the standard attire of a black leather vest and matching boots with a pair of camouflage shorts, giving him the look of a punk-rock Santa Claus. His disposition is nonchalant; he moves the whip haphazardly up and down and side to side in the same way that he might paint his house. Leathermen in various states of undress watch and chat. 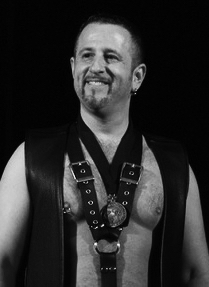 At the other end of the room is Omar Boots, a muscular man in his twenties with an impressive mustache. Boots won the Mr. CT Leather competition last year. His leather outfit is more elaborate than the others: skin-tight trousers, boots, gloves, and a short-sleeve jacket that buttons down the front. He wears a sash that reads “Mr. Connecticut Leather, 2014.” This ensemble is called “formal wear,” in leather parlance.

Though he carries himself like an established figure, Boots is still fairly new to the leather community; he won last year’s title only a few months after joining the group. Like many other leathermen, he was introduced to the concept of leather and BDSM through pornography. “It was just a fantasy. I didn’t know there was such a thing as a titleholder. I thought it was just hot guys wearing leather,” recalls Boots. But the summer before last, eight years after moving to New Haven, Boots asked one of his drag queen friends to introduce him to some leathermen. That was how he found CT Cruisers.

During his tenure as Mr. CT Leather 2014, he has fundraised for AIDS Project New Haven and the Downtown Evening Soup Kitchen. He is also largely responsible for expanding the New-York-based Leather Cares Ribbons, a leather and HIV/AIDS awareness organization, into other Northeastern states. “The non-sexual part is helping the community and doing charitable work. The sexual part is embracing yourself and exploring your kinky side,” says Boots.

We go around the room with the customary introductions. At my turn I tell them, “I’m a student reporter doing a story on this whole weekend. Thank you for having me.” Jones, to my left, interjects, “Well, we haven’t had you yet.” The room erupts in laughter.

Leathermen trace their roots back to motorcycle gangs and the closeted soldiers returning from WWII in the 1940s. But the leather community, like any other, faces the challenge of maintaining its customs in an ever-shifting milieu, as the so-called New Guard strains against the customs of the Old Guard. In the early stages of leather culture, when being homosexual was a punishable offense by law, it was dangerous to be involved with gay BDSM. Since people risked both their professional and their social standing, leathermen had to proceed with caution. But now, in a more liberal society, today’s leathermen have realized that die-hard traditionalism is unsustainable. They walk the fine line between preserving the traditions of their seventy-year history while also embracing modern trends. 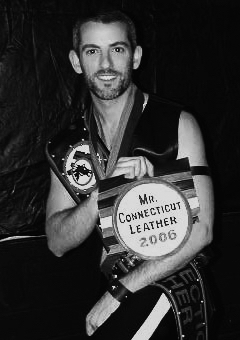 “Thirty years ago, being a boy was a completely different experience. There were boundaries. Boys knew their place and sirs knew their place,” one of the older men in the circle comments. Relics from this era are still present in modern leather culture. The sir-boy hierarchy is an obvious example, but not the only one. At the conference, men also have handkerchiefs peeking out from their pockets, and leather bands around their wrists. Many wear either a Muir cap or a padlock collar. The accessories were originally covert signals to other leathermen. The color of the handkerchief told others what sexual act you were interested in, while the hand on which you wore your leather band would communicate whether you were dominant or submissive. Boys wore padlock collars to signal that they were “collared,” or in a relationship with a sir, while sirs would wear Muir caps as a symbol of their position.

With anti-sodomy laws now struck down and gay marriage gaining legal recognition across the country, leather and BDSM have become much more socially acceptable. As a result, the preexisting leather community is facing an onslaught of newcomers who know nothing about the old customs. A common complaint is that leathermen now indiscriminately don the Muir caps, which they once had to earn the right to wear. The padlock collars that formerly symbolized a close bond between a sir and his boy have been reduced to trinkets that people lock and unlock on a whim. Yet correcting new members’ faux pas is a challenge, in part because fewer members of the Old Guard remain: “We lost a whole generation of people to the AIDS scourge,” Bielski notes.

Members of the Old Guard have founded fraternal organizations such as CT Cruisers and the Leather Boys of New England in order to pass down traditions, but they are fighting an uphill battle. Still, some members of the New Guard embrace their customs. “The Old Guard is really important to me because they have our roots, but the New Guard is also important because we need to accept the new generation. I believe in Old Guard and New Guard,” Boots says proudly. 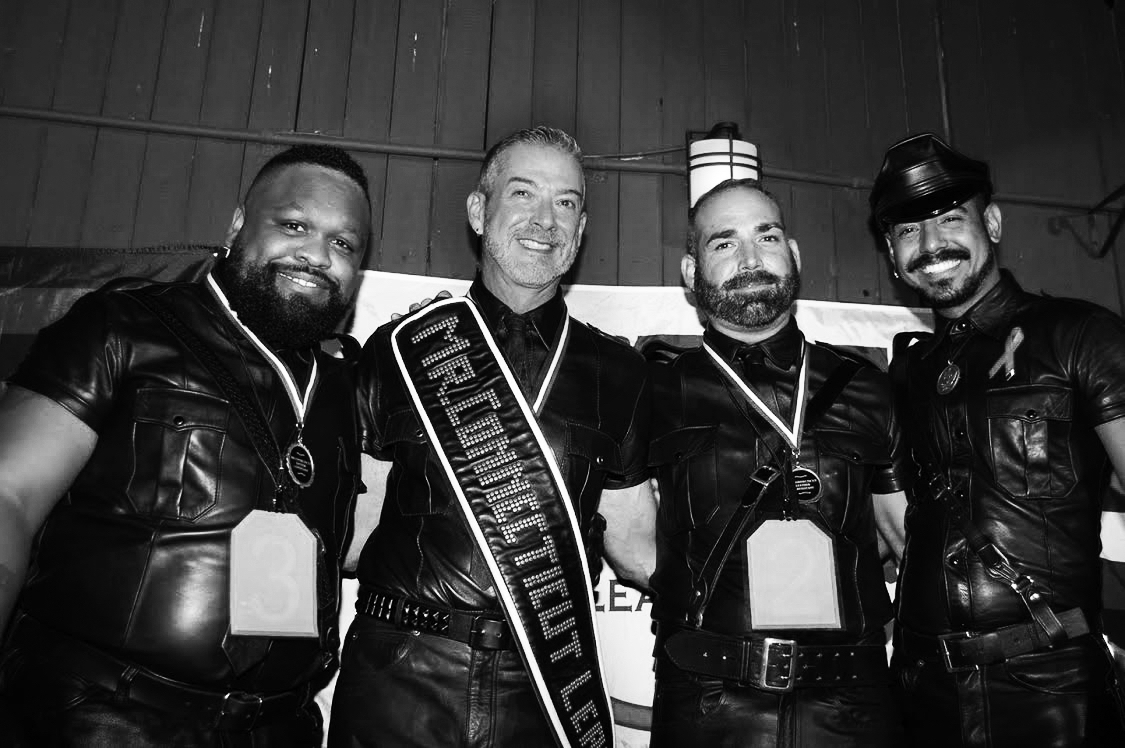 Ten hours later, we’re back at 168 York Street Café for the Mr. Connecticut Leather competition. The building is packed with a menagerie of prominent figures from every corner of New England’s LGBTQ scene. There are not just leather boys and sirs; bears, cubs, drag queens, monarchs, pups, and rubbermen crowd around the stage in the café’s patio. Trying to discern everyone’s titles and affiliations is an impossible exercise in queer taxonomy.

The contest was supposed to start at 9 p.m. It’s now 10:15, and blood alcohol levels have risen. But the bacchanalian feel of the night is interrupted when the pageant begins, unexpectedly, with a eulogy. David Murphy, Mr. Connecticut Leather 2006, walks onto the narrow stage in formal leatherwear. His stage fright is visible as he clutches the microphone, looks down at his typed-out speech, and begins: “On the whole, we’re a pretty hardy bunch. It’s pretty much impossible to kill us. But hey, we lost one of our own last year. It’s been a very hard time for a lot of us, and I’m going to tell you a story.”

Jayson Scott, Mr. Connecticut Leather 2007, passed away in 2013 from colon cancer. Scott and Murphy’s friendship spanned over ten years, and Murphy recounts how their lives intertwined—how Murphy calmed Scott’s nerves before his big speech in the 2007 contest; how Scott used to give Murphy’s infant son formula on road trips; how Murphy held the sick bowl for Scott as he vomited in the last twenty-four hours before he passed away; how, in the weeks afterward, Murphy had to hide Scott’s leather paraphernalia from his mother, who, even after her son’s death didn’t know about his involvement in the leather community. The speech ends with the unveiling of a disco ball, which Scott had requested they display for all future contests. After sharing a moment of silence, bathed in the ball’s glittering light, the leathermen, bears, and drag queens, tears still in their eyes, join together in singing the national anthem.

But physical appearance matters little to the judges. Most important are the interviews, held in private earlier in the day, which ask the contestants about their goals in representing the community and their knowledge of leather history. After all, Mr. CT Leather needs to be an ambassador for current and past leather communities.

As much as this is a night to pick a new ambassador, it is also an occasion to celebrate Boots’ time as Mr. Connecticut Leather. Projected on the wall to the left of the stage is a slideshow dedicated to his year of service; he is shirtless in at least half the photos. “I want to thank the community for opening the door for a new journey for my life,” Boots says, on the verge of tears. “Thank you to the leather community; I got a chance to explore and see the person I really am.” 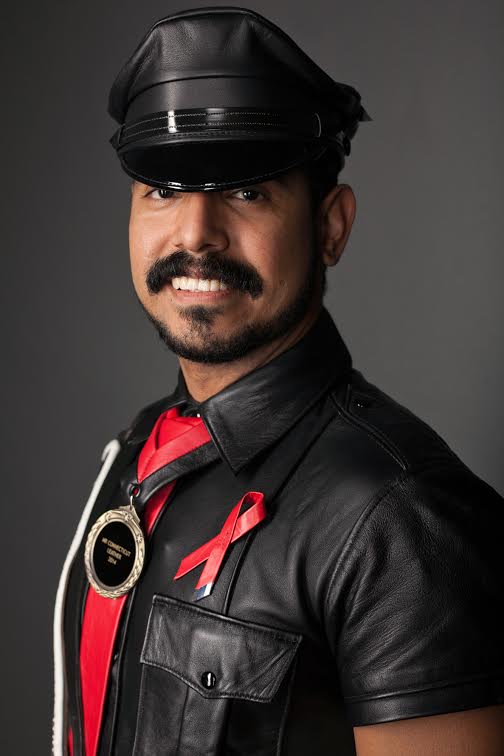 After imploring the crowd to be accepting of all creeds and colors, he removes his sash, his head slightly bowed. This is the first time I’ve seen him without it; he seems mousier now. After the crowd takes a moment to cheer, the contestants walk onto the stage to hear the results. When the winner, David Gerard, is named, Boots takes another sash and wraps it around the new Mr. Connecticut Leather. He gives each contestant a hug, raises his hands in applause, and exits stage right.

At 11 a.m. the Sunday after the competition, the Imperial Sovereign Court of all Connecticut, “a non-profit organization centered around the form of a traditional monarchy where members receive royal titles [and] raise charitable funds and perform noble deeds for the community at large,” according to their website, holds a victory brunch at the café to celebrate Gerard’s title. It’s a smaller affair—around twenty people sharing mimosas and eating eggs and sausage off of aluminum trays. Even with the smaller crowd, the Court still puts on a revue of lip-syncing cross-dressers and bears.

It is difficult to say whether Mr. Connecticut Leather, as an institution, can bring back the decorum and values that leather culture has lost over the years. In an age when leather newcomers are either ignorant or uninterested in the culture’s foundations, and kinky hookups require only a few keystrokes, Mr. Connecticut Leather might be swimming upstream. But Boots and Jones and countless others are not about to give up and allow leather to be reduced to just another fetish. For them, being a leatherman is so much more.

Toward the end of the proceedings, the MCs call Boots to the stage again. Arsenio Amadis, a former leather champion in New York and Boots’s close friend, declares: “We’re going to cover Omar today.” The term “cover” refers to the donning of the Muir cap. The leather brim may be flippantly worn elsewhere, but at CT Leather events, it is given only to sirs who demonstrate exceptional dedication to the community. Boots kneels before Amadis, who places the cap upon his head like a crown and announces to the audience, “I now present to you, Sir Omar.” The cap is primarily a symbol of his dedication to his charitable work—but the fun of the pageantry is never lost.

Aaron Mak is a junior in Berkeley College. 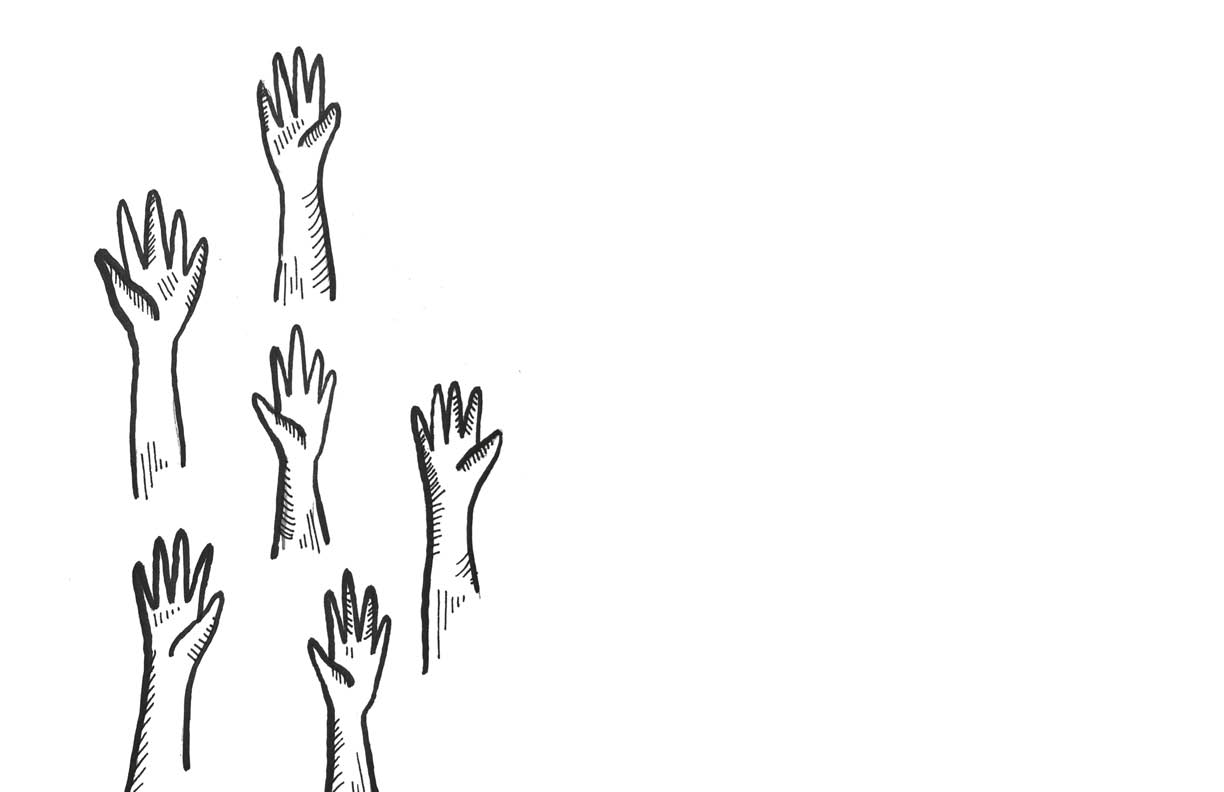