All In The Mind

The Yale men’s soccer team won only one of its seventeen games this season. Midway through the fall, it had become clear physical training was not leading to considerable improvement on the field. The coaches hoped to find another way to give their team an edge. They talked one-on-one with the players, learning what made each man tick, even administering personality tests. They were not looking for information about the players’ observable performances. Instead, they were interested in improving the team’s mental game; the players still psyched themselves out on the field. So, the coaches offered a few of them an unusual self-improvement opportunity: hypnotherapy.

Ryan Simpson, a sophomore goalkeeper, was one of three teammates who took the coaches up on their offer, and the only one to agree to an interview. The bright blond athlete had dated one of my suitemates, so he was comfortable being candid with me. On the soccer field, Ryan often struggled to keep his mind under control; he was jittery and nervous. He reacted slowly, and didn’t jump high enough or dive far enough to make saves. Off the field, he kept his frustrations bottled up until they began to manifest in insomnia, anxiety, or the cathartic breaking of furniture. Despite these problems, he didn’t initially embrace the idea of hypnotherapy.

“I went in thinking, ‘This is going to be silly,’’’ Ryan said, eventually agreeing to hypnotherapy partly out of a sense of obligation: the hypnotherapist, Leanne Peterson, is also the fiancé of the team’s assistant coach, Hiro Suzuki. (Suzuki and Brian Tompkins, the recently retired head coach, could not be reached for comment.)

“I never thought it would work,” Ryan continued, “but I am so happy to say I was one hundred percent wrong… It helped me attempt to figure out me.”

I wanted to believe Ryan when he talked about the radical change in his perspective, but I couldn’t help feeling skeptical. Still, I was excited when Ryan and Peterson allowed me to come along for their second appointment. I suppressed my doubts and went to experience hypnosis for myself. 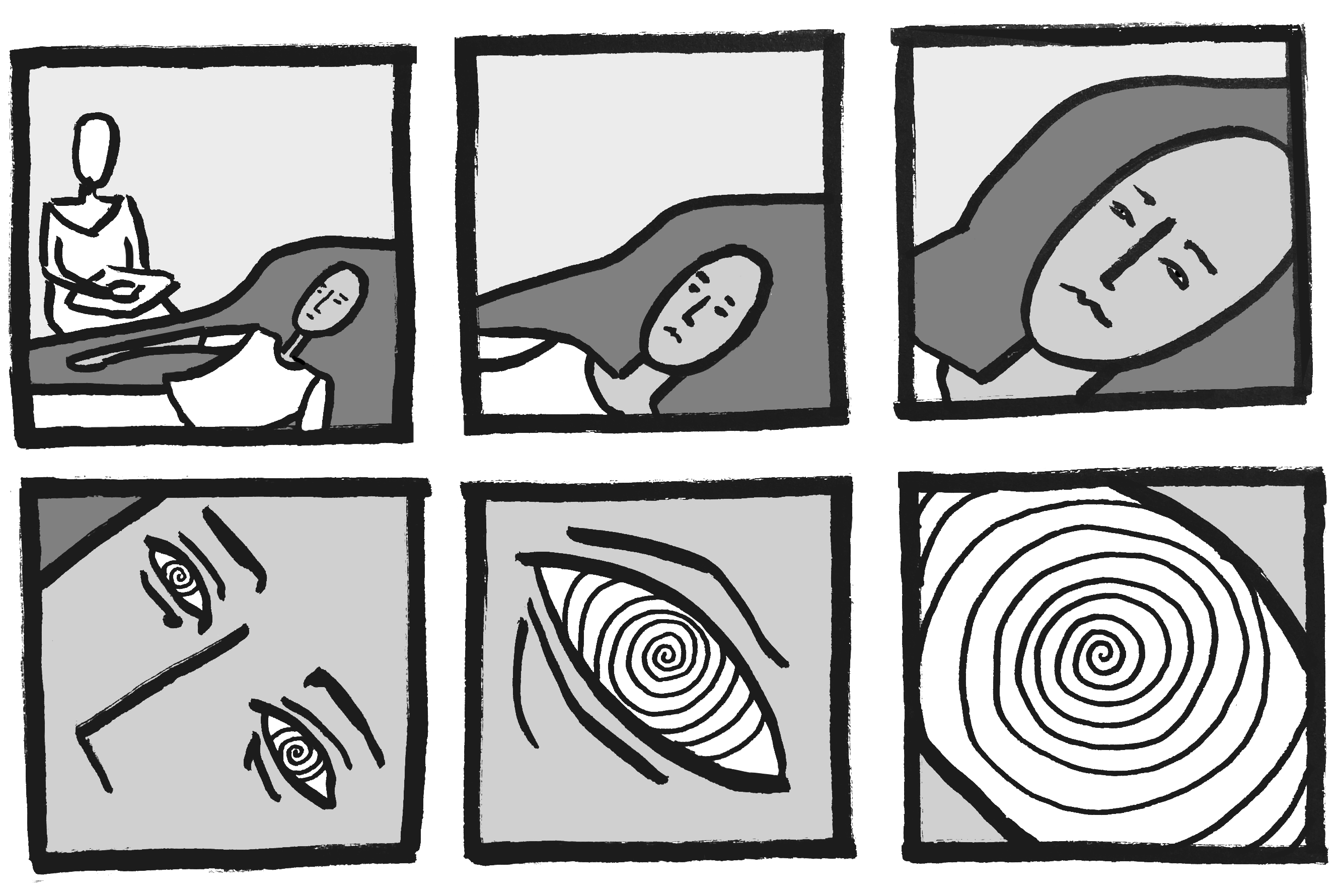 Hypnosis has long been popular as an on-stage entertainment stunt, and as a result, hypnotherapy has struggled to assert itself as medically sound. It can be hard to find unbiased information about its effectiveness, since most of the testimonies are from practicing hypnotherapists. The scientific studies that do exist look into two dozen participants at most. For example, a 2000 study published in the academic journal Perceptual and Motor Skills observed that “hypnosis may positively control emotions, thoughts, feelings, and perceptions,” but the two researchers, sports psychologists at the University of Sheffield Hallam, based their claim on the experiences of a single “elite senior European tour golfer.” Other studies, which have looked at hypnotherapy patients’ cerebral blood flow or athletic performance, suffer from similarly small sample sizes.

However, hypnotherapy, which uses hypnosis to encourage subconscious changes, promises success rates that conventional medicine cannot. As a result, it is becoming increasingly popular. There are over a dozen hypnotherapy centers in the greater New Haven area, many of which practice sports hypnotherapy and count Yale athletes among their clients. One is the Amadeus Center for Health & Healing, located just two blocks from the university’s campus. Another, Mindful Warriors, based out of Lakeville, Connecticut, offers testimonials on its website from Yale varsity golfers as well as volleyball, football, and field hockey players, all praising the therapist’s ability to help them relax and learn about themselves. So, the soccer team’s embrace of self-realization through hypnotherapy isn’t entirely new.

The NCAA publication Mind, Body, and Sport, calls sports psychologists “an ideal resource to provide care and services,” but warns against “motivational gurus” and “mental coaches,” who can find “college athletics a prime target for their services, and they may very well ignore, minimize or neglect the real issues of psychological health.” Still, Matthew Stults-Kolehmainen, Ph.D, an exercise physiologist and researcher at the Yale Stress Center and Columbia University, told me that he believes the therapy might have some merit. Although he wouldn’t personally prescribe hypnotherapy, he conceded “the literature does report some evidence of efficacy for some performance-related outcomes.”

Hypnotherapy’s reputation often affects clients’ expectations. Peterson, the soccer team’s hypnotherapist, noted that clients often come in either overly skeptical, which prevents them from feeling any effects, or overly excited, believing her to be a psychic.

A licensed clinical social worker, Peterson practiced traditional talk therapy for two years before acquiring her hypnotherapy license in 2013. With hypnotherapy, however, she says she sees results much more quickly. In her experience, the treatment can address issues as varied as academic underachievement, grief, and depression in only four sessions. One patient’s anxiety seemed to decrease by half after just one meeting. As Peterson put it, she’d “never seen results like that in traditional therapy.”

When Ryan and I met to walk to our hypnotherapy session, I expected him to guide us to a clinic or office building. Instead, we turned toward a cluster of nearby apartments. Peterson has a New Haven office for her business–a meditation, yoga, and therapy center called Elevate—but she sometimes holds informal sessions at home.

A small woman with a bright smile and glossy brown hair, Peterson was poised and professional. She asked us to remove our shoes in the entryway before guiding us to the living room, lit warmly with star-shaped lanterns. There, Ryan and I each lay on a wing of her L-shaped couch.

Our session, like each session Peterson administers, began with a conversation about what hypnotherapy is and what we wanted to address, settling on academic anxiety. Peterson played a dulcet instrumental track on her laptop, as she turned down the lights and began to speak, slowly and softly.

“Imagine a ball of energy starting at your toes,” she began. We envisioned it passing from our feet to our ankles, up our legs and throughout our bodies. “Imagine your body melting away,” she continued, and we systematically let our awareness of each of our limbs float away: leg, leg, arm, arm.

Worried I wasn’t fully hypnotized, I analyzed my hypnosis as it occurred. What would happen, I wondered, if I moved my arm? Would it break the spell? But even as I considered it my limbs felt heavy, locked in place, as if asleep. I could move my arm, I thought. But why bother? This was the hypnosis, I decided—or, at least, the manifestation of my desire not to sabotage my own experience.

Later, I asked Peterson why, instead of losing consciousness completely, I felt half-awake throughout the session—aware of my body and my senses but unable or unwilling to move. She reassured me that my experience was a common one, explaining that people tend to expect hypnosis to feel utterly new, when in reality it is more like an extended state of relaxation, similar to meditation.

Continuing the hypnosis, Peterson instructed us to mentally walk down a staircase to a meadow. From there, she guided us to an outdoor path, where we were told to follow the sun. In my mind I followed the sun along a California hillside, which transformed into a tree-lined trail as my thoughts became increasingly governed by dream logic.

“Follow the path and don’t worry about your future,” Peterson directed. “The future is your path and the sun will guide you.” We were then led to a movie theater, where we were instructed to watch ourselves succeeding on the screen. In my black-and-white mental movie, I was taking tests and writing papers, completely calm throughout.

“Picture yourself during finals succeeding. Say to yourself, ‘I am enough. I am enough,’” she intoned. “Say, ‘I am relaxed and peaceful. I release stress.’”

We hovered there for a moment, watching our imaginary futures on our imaginary screens, before Peterson walked us backwards out of the hypnosis: we traveled down the path again, up the stairs, and then, on a count of three, became aware of our bodies and our faces, and finally opened our eyes. Ryan woke as if from a deep sleep, unable to remember half of the session.

Although an inch-long tear in his quadriceps prevented Ryan from completing the soccer season, he did play one post-hypnotherapy game on his injured leg. Normally antsy and unfocused, Ryan remembers feeling calm and relaxed during the match, which was against Fairleigh Dickinson. During the game, instead of letting his doubts get the better of him, he told me he was able to trust himself. The mental shift translated into better performance. He made smarter decisions and felt more confident, which helped him block more shots.

It’s impossible to know how much of this can be attributed to the hypnotherapy, but Ryan credits the treatment for his improvements. He recalled how, during his first session, Peterson asked him to visualize two abstract struggles: first, climbing a mountain until he reached what he described as “his vision of success”; and then plunging “underwater and feeling crushed by the weight of everything,” until he escaped and swam to the surface. Ryan said hypnotherapy allowed him to switch his perspective from a glass half empty to a glass half full.

Yet, Ryan had wanted to be calmer and more present, so hypnotherapy may have acted as a catalyst for a mental shift towards which he had already been reaching. Changes he attributed to hypnotherapy might have occurred, eventually, simply through force of will. Maybe it was the opportunity to pause and reflect that improved his play. “The purpose [of hypnotherapy] is to remind you of what makes you succeed and what causes you to fail,” Ryan told me, which could, perhaps, be achieved on one’s own.

I had seen Ryan’s transformation, and I wanted hypnotherapy to work for me. A few days later, overwhelmed by work, I found myself in the library quietly chanting Peterson’s mantra, “I am enough. I am enough.” But it was hard, during the academic crush of early December, to know if the calmness I was feeling was a result of a subconscious suggestion or a sign of emotional burnout. I think I’ve been better able to deal with stress, but I have no real metric by which to measure my success. I don’t know if it’s possible hold hypnotherapy’s subconscious suggestions responsible. It might have simply been, as Ryan kept suggesting, a reminder to pay more attention to myself.

“Sixty percent of my game is all mental,” Ryan had told me during our interviews. Maybe the secret to athletic success is not the daily workouts, weight lifting, or running drills. Instead, it might be learning to know yourself better–your rhythms, your stressors. Maybe the first step is laying on a couch in a darkened room, conjuring mental mirages, your limbs perfectly still.

Ivy Sanders-Schneider is a sophomore in Jonathan Edwards College.

An earlier version of this piece misidentified Yale’s opponent in Ryan’s first post-hypnotherapy match. It was Fairleigh Dickinson, not Harvard.