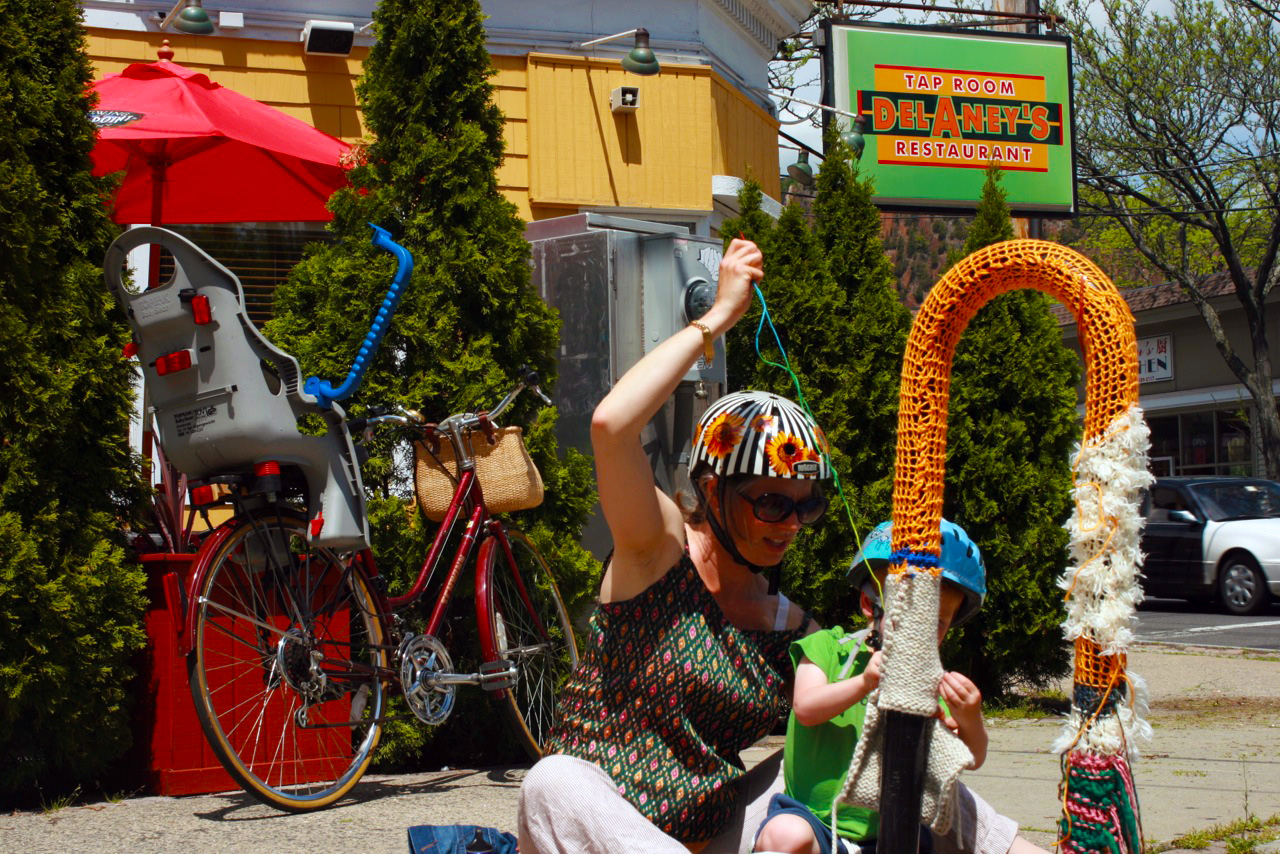 The yarn hung in purple skeins from the ceilings of small tents. It was wrapped into rainbow spirals inside plastic boxes, and interwoven with bright green feathers and small iridescent sequins. Yarn stared up at me from book covers, from brochures, from multicolored quilts stretched over tables, and from the hands of women clicking knitting needles.

On a Saturday in October, I was at Stitches East, an annual “fiber experience” for knitters, crocheters, spinners, and dyers. The three-day-long event boasted a marketplace, a fashion show, and a full schedule of technique classes. The Hartford Convention Center was quiet, save for the mechanical whir of yarn swifts turning their wooden arms in quick circles. Booths were strung with Christmas lights and decorated with framed photos of alpacas. The crowd was what I expected: largely middle-aged, white, and female. Some wore floor-length Renaissance dresses or skirts decorated with cherries.

But I was there in search of “yarn bombers”: craftivists who display their knitting in public spaces in support of certain social and political goals. I learned to knit and cross-stitch at an elementary school where none of the work was graded and teachers went by their first names. Crafting was an opportunity for creative expression, not an exercise in thrift. But as Joanne Turney writes in The Culture of Knitting, knitting has a history as a “subversive, even devious activity.” It has been used as a tool for environmentalism, Marxism, and feminism. Knitting can reclaim a largely anonymized, mechanized, labor-divided process of production, and revalue objects based on the time and skill spent creating them.

During the summer of 2014, I walked across a bridge over Boston’s Charles River, running my hand over the knit-covered handrail between the city and Cambridge. The yarn art was created in part in an effort to connect different communities after the Boston Marathon bombings. But such public acts of knitting can be even more radical. In 2012, a group called Government Free VJJ organized a campaign to send knit vaginas and uteri to Republican congressmen who had drafted laws restricting women’s reproductive rights. My imagination of the people who knit-bombed grew wild. I began to picture them as D.I.Y grrrls in Doc Martens and pixie cuts. Maybe, in communities close to my own, I would find the subversive “craftivists” that Turney describes. Armed with an encyclopedia of third-wave feminism and a pair of old knitting needles, I went looking for knitting circles in New Haven—and nearby—that were unraveling the patriarchy, one stitch at a time.

At Stitches East, however, hot-blooded radicals were hard to find. I spotted a woman holding a tiny green plastic ring in her hands, sewing a lace flower. She told me her name was Jacqueline Chalmers, and we chatted about what she called “fiberholics” in the “fiber community.” When she said she was part of a Stitch ’n’ Bitch group, she tripped a little over the “bitch” part. (Stitch ’n’ Bitch is a movement created by Debbie Stoller, who got a doctorate in psychology from Yale, and who has authored a series of pattern books with modern projects that appeal to a younger audience. Groups of knitters and crocheters who gather in coffee shops or yarn stores to knit together often refer to the event as “Stitch ’n’ Bitch.”)

I questioned whether my preconceptions of radical knitters’ appearances were accurate, even though she was not wearing, say, an eyebrow ring or leather jacket. So I asked her if she’d ever yarn bombed. Chalmers told me that she and her knitting group sometimes draped blankets over benches in Binghamton, New York, partially as street art and partially as an anonymous donation to the homeless. Another attendee, Sara Bixler, a weaver with red and purple glasses, told me about a recent yarn bomb she contributed to outside of a Quaker retreat center in Pennsylvania. The purpose was to express solidarity with local gay and transgender communities.

Guerilla knitting traces its roots to early 2005, when, on a whim, Texas-based yarn shop owner Magda Sayeg knitted a cozy for her shop’s door handle. Sayeg formed a group called the Nitta Crew, whose mission, according to an anonymous member known as AKrylik, is to make street art a little more warm and fuzzy. Sayeg’s project inspired knitters across the world to cover their own surroundings with knit “sweaters,” sometimes for beautification, other times with more strident goals. Along with her customers, Linda Reis, the owner of Knit New Haven, yarn bombs New Haven’s Whitney Avenue each year. Thick mauve yarn wraps around thin gold string on a row of street signs and trees. Between two parking meters, she has stitched a red-and-white heart. Trina Machesney, another local knitter, told me the “sweater” she placed on a friend’s tree as a birthday present was probably the first-ever yarn bomb in the Westville neighborhood. She claims the craft of knitting is undergoing a modern revival, especially among American families who had forgotten the art.

I wanted to learn more about the importance of knitting for community building, so I called Gale Zucker, the Connecticut-based co-author of Craft Activism: People, Ideas, and Projects from the New Community of Handmade and How You Can Join In. Yarn bombing can make a statement in a “passive political way,” she explained.

She told me about an event she organized in Little Rock, Arkansas, at a public library. “It’s an urban library, right in the center of Little Rock, and we started making little things out of old stuff that people brought, old buttons and threads. We went outside and yarn bombed all the trees and poles and people joined in, in the middle of the city.” It was one of her favorite yarn bombing projects. “For those two hours, you had a really amazing community effort going on.” Zucker’s language sometimes seemed too optimistic, and she was quick to dismiss claims that craftivism might be largely the hobby of the white middle class. Her project did seem valuable, though, in that it temporarily drew different demographics of the city into the same public space.

Another Westville knitter, Stephanie Maples, conducted a similar project in her own neighborhood. For the past few years, she has coordinated yarn bombs in conjunction with the neighborhood’s annual Art Walk. As we sat in Manjares, a coffee shop with a view of Edgewood Park and a few yarn-bombed bike racks, Maples described the people who would approach her as she yarn bombed. They would reminisce about how their grandmothers used to knit and how they thought it was great she was reviving the practice. While we talked, she ran into a few people she knew, talking and laughing as she stood by their table. It’s easy to imagine her orchestrating a yarn bomb: gathering together women—the yarn-bombers who have participated in Art Walk were all women—and showing them how to patch together an eight-foot-long scarf from the dozens of squares they have knitted together.

The more women I spoke with, the more I began to question the idea that knitting circles were bastions of political action. The knitters I spoke to did not consider themselves icons of larger movements. “I don’t really attach it to anything besides personally what I want to do,” Maples told me. This attitude could be a product of the second-wave feminism they grew up with: as Turney notes, in 1970s and 1980s feminist discourse, knitting was seen “as an act of compliance and submissiveness, and was derided.” In third-wave feminism and beyond, the craft was embraced as a way of reclaiming traditionally “feminine” activities in new ways

But even if the knitters did not see themselves as third-wave feminists, under Zucker’s broad definition (“Using craft for a reason beyond the simple making of the thing and working of the materials”) the Westville yarn bombers I met were craftivists on a very local scale. Machesney spoke about reclaiming the process of making a product from start to finish, inching towards the Marxist theories of knitting that Turney discusses in her book. Even when these women are not consciously aligning themselves with any particular ideology, they are participating in a different kind of action, one that celebrates the act of making and being together, in a society where activities like this are rare.

I had sought punks with radical values. Instead I had found mothers caring just as deeply, if not about ideology, then about their neighborhood.

New Haven knitters were invested in their community-based creation. But a small part of me still wondered: where, if not locally, could I find the knitters who were using the craft to tackle capitalism, patriarchy, and environmental destruction? The women I talked to mentioned ravelry.com, what Machesney called “Facebook for knitters,” several times. The day I returned from our interview, I made an account.

Ravelry is a fairly anonymous social network, centered on what we make instead of who we are. Knitters catalog their yarn “stashes,” document their progress on projects, and ask for help with tricky patterns. Recent forum subject lines include everything from “Smocking Stitch Brimmed Hat (help, please!)” to “Math Question…” to “Crafty Word Game.” But the forums also host discussions about subjects that the knitters I spoke to in person were hesitant to broach. Threads include “The things we’re too polite to say/can’t say out loud…” “Please explain radical feminism as charitably as possible?” “Should we dump ‘Mrs’ and ‘Miss’?” “Islamic feminism” and “Femnants: what are you reading?” Groups like the “Big Issues Debate Group” start threads about Ferguson, Ebola, voter turnout in the United States, and God.

The future of political knitting communities seems to be online, an unlikely home for those who harbor some serious nostalgia for Grandma’s handmade hats. But Ravelry also shows me the variety of forms knitting communities can take. I found that today’s yarn-bombing enthusiasts in New Haven aren’t pink-haired activists holding up signs that say “PEACE KNITS.” The seemingly modest goals of Westville knitters can coexist with the sweeping ideals of Turney’s book and the nonstop buzz of Ravelry’s forums. The projects under way in Westville that aspire to bring together neighbors may seem self-contained, but they are part of a larger quilt of movements and crafting groups that continue to adapt, even as they practice a historical craft. The nature of the craft seems to encourage constant revision and restructuring of the communities that support it: after all, yarn can always be unraveled, and the knitter can begin again.

Ariel Katz is a senior in Morse College.