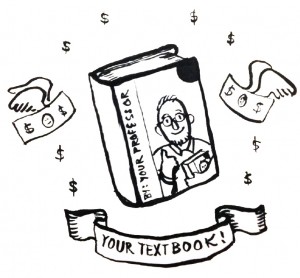 At the beginning of every semester, Yale Law School professor Ian Ayres stands at the front of the classroom and opens his wallet. He pulls out crisp bills and hands them out, one by one, to the passing law students. The students walk out not only with their casebooks, but also with ten dollars from the author himself.

In a 2005 New York Times opinion article titled “Just What the Professor Ordered,” Ayres sparked a national debate when he wrote, “Professors’ incentives in choosing textbooks are in some ways more distorted than doctors’ incentives in choosing drugs.” On average, course book authors receive ten percent of the cover price in royalties for each book sold. Ayres argued that they could abuse their freedom to assign reading for financial gain.

Ayres finds this freedom particularly alarming given soaring textbook prices. In 2013, the National Association of College Stores, a campus retail group, estimated the cost of one new textbook to be seventy-nine dollars, bringing the average cost of a student’s required course materials to over six hundred dollars per semester.

The American Association of University Professors delegates responsibility to individual universities to regulate this ethical quandary. Professors at Virginia State, the University of Minnesota, and Southern Utah University, for example, must have their syllabi screened by committees for potential conflicts of interest. After a November 2014 article published in the University of Buffalo’s newspaper, The Spectrum, exposed professors who assign their own books for profit, the university’s Faculty Senate instated a committee to draft a policy addressing the matter.

Yale, however, does not monitor the texts professors assign. When I scoured the new Faculty Standards of Conduct draft, I found no mention of the topic. When I wrote Stephanie Spangler, head of the Ad Hoc Committee on Faculty Standards of Conduct, she confirmed its absence and directed me to the University’s policy on conflicts of interest, where, again, there was no explicit reference to assigning textbooks.

Regardless, some Yale professors have heard Ayres’s clarion call. Journalism professor Steven Brill promised to give his students a check if they purchased his book, America’s Bitter Pill, at the end of this past semester. Music professor Craig Wright puts a picture of a ten-dollar bill on the last slide of his presentations, prompting students to come forward and “retrieve the money that is rightly theirs.” But most Yale educators are reluctant to make such refunds.

I walk into American Studies professor Matthew Jacobson’s office to discuss one of twelve required texts on his “Formations of Modern American Culture” syllabus, What Have They Built You to Do, a book about Cold War America and the film The Manchurian Candidate. My questions, however, aren’t about McCarthyism or communist ideology. Instead, they are about present-day capitalism. The book, co-written by Jacobson, costs $1.04 on Amazon for a used copy, $10.87 for a Kindle edition, and $17.96 for a new paperback. “None of us are in it for the money,” Jacobson tells me, “People don’t even think of it as income. I can show you stubs from royalty checks that are, like, forty dollars.”

Professor Robyn Creswell assigns his own edition of That Smell and Notes from Prison for the course “Politics and Literature of the Middle East.” He, too, responds to my questions with a shrug. As a translator, his royalties are only one to two percent of the cover price, and only when the book is purchased new. Jacobson hasn’t negotiated for Kindle profits, and professor David Blight says he makes no royalties off A Slave No More “for complicated contractual reasons.”

I’ve been at Yale for four semesters and I’ve been assigned five books written by my professors, on everything from environmental law to poetry. I haven’t asked any professors for a refund. But inspired by Ayres’s insistence, I shyly ask professor Creswell whether he’d consider handing out cash if the profits were greater. “Maybe I would take students out for doughnuts,” he says.

As I speak to professor Ayres on the phone, I pace back and forth in Sterling’s nave, watching students thumb through thousands of dollars worth of readings. I’ve started viewing the books as their receipts, but Ayres snaps me out of it, reminding me that books, above all, are meant to teach students. “I’m hired to transmit ideas I think are of value,” Ayres says. “Assigning a book you’ve written allows you to more officially profess ideas you created and believe in passionately.”

But there’s an inherent conflict of interest here, too. Can—or will—students objectively discuss and critique the author’s argument when their grade depends on their relationship with said author?

When professor Creswell asks my class what we think of his translation, we compliment the rawness of the language, the shortness of the sentences. We don’t find anything to criticize. But, Creswell says, “students certainly have to be made to feel that they are interlocutors,” empowered to participate and respond.

To that end, Jacobson asks his graduate students to write critical responses to the readings he assigns, including his own. “If they promise to be respectful, I promise not to be defensive,” he chuckles. Similarly, Brill assigns the forty-page article upon which America’s Bitter Pill was based, providing students with thick stacks of the photocopied pages. “I told them to find something badly sourced or badly written,” he says.

Some professors circumvent the question of textbook profits by allocating them to a charity related to their field. John Grim, who teaches courses on religion and ecology, donates to Native American groups. George Chauncey, the instructor of “U.S. Lesbian and Gay History,” donates to groups advocating for LBGTQ rights and researching AIDS.

But Ayres still implores Yale professors to consider returning the proceeds to the students who are there to learn. “I call upon students to ask their professors to join me in disgorging the profits,” he proclaims. “Rather than there being a law, let’s start modestly by just politely asking.” Nowadays, he prefers to let his administrative assistant handle this “disgorgement,” as he calls it. Handing out cash himself has come to seem too dramatic, he says. And besides, he doesn’t always have exact change.

Thomas Pogge stands in the doorway of a classroom in Linsly-Chittenden Hall, surrounded by a gaggle…

Standing at the threshold of society, newly released inmates plan their next steps …

Connecticut’s contra dancing community reckons with the prospect of change.…

Thomas Pogge stands in the doorway of a classroom in

Standing at the threshold of society, newly released inmates plan