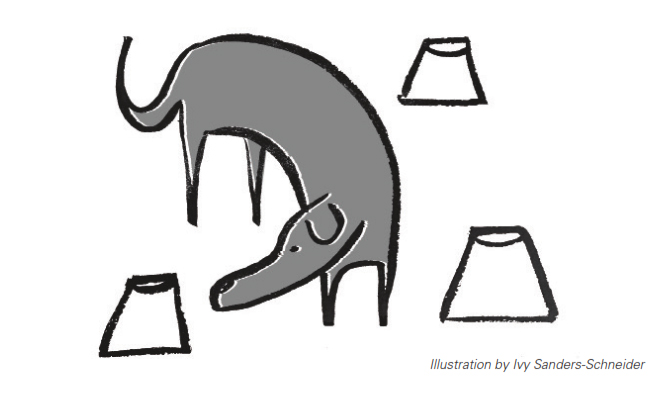 Zoe the chocolate lab stares at the two overturned white buckets on the other side of the room. A screen is placed in front of the buckets, blocking her view, and a treat is placed under one of the buckets. But which one? The dog strains against her leash, her tail twitching uncontrollably. As the screen rises, she rushes toward the buckets. Researcher Rebecca Spaulding points emphatically to the correct container, but Zoe ignores her gesture. She turns to the other bucket, trying desperately to overturn it with her large brown nose. It slides only a few inches across the smooth floor. Why doesn’t Zoe respond to the pointing?

This scene plays out just behind Science Hill in a tiny white building visited by dogs from across the tri-state area. The Canine Cognition Center (CCC) opened a year and a half ago as part of Yale’s Comparative Cognition Lab. “Our center is devoted to learning more about canine psychology—how dogs perceive their environment, solve problems, and make decisions,” Laurie Santos, the CCC’s director, wrote in an email. Scientists already know that both nature and nurture play a role in development, but the question is how much “nurture”—or environment—matters.

The researchers refer to their test subjects as “dog scientists” on the CCC’s website, but they caution the leash-holders against believing that dogs always understand what’s going on. Even so, the owners tend to become invested in the experiments’ outcomes. “I am always rooting for her to do well!” laughs Theresa Schenker, Zoe’s owner, who said she hoped the research would give her a chance to bond with her pet. In the laboratory’s curious social dynamic, owners must be instructed to sit with their heads down and eyes closed to avoid giving helpful cues while their barking counterparts are put to the test.

For all the big questions the researchers try to answer, the laboratory building is surprisingly small. But many dogs troop in and out over the course of the day, sometimes leading to confusion. “Wait,” Spaulding said at one point, while looking at the whiteboard with the list of dogs coming in. “Is Zoe the dog or the owner?” Upon closer examination, we confirmed that Zoe is a dog. “We keep getting dogs with people names,” she explained in the lab’s office.

In keeping with this theme, I observe Lily, a large black poodle whose tightly curled fur is adorned with bright pink rubber bands. She pants and tugs at the leash held by her owner, Catherine Kelly, who sports a black T-shirt decorated with a bejeweled poodle. Kelly straightens her glasses on her nose as she apologizes for the state of Lily’s unkempt fur. “She has all these clumps here! I need to take her to the groomer,” she says, attempting to smooth down the black curls. Lily pants happily, unfazed, and examines my hands for treats.

“We’re going to have three parts to your visit today,” Spaulding explains to Kelly. “First, we’ll have Lily warm up and get some easy treats. Then we’ll do the first test, where we’ll hide a treat and see where Lily chooses to look for it. Next, we’ll present Lily a scene with certain cues and see how she responds.” Kelly and Lily enter the testing room as Spaulding switches on a television screen in the waiting room. A live camera feed appears, allowing me to watch Lily’s session.

The tests are often derived from experiments that comparative psychologists give to monkeys or babies. But dogs come in all shapes and sizes, and the tests must sometimes be customized to take that into account. “The difference between a very small Chihuahua and a large Bernese mountain dog is huge, and setting up the same things for both of those dogs will get different results,” says Linda Chang, the lab’s manager at the time. This trial-and-error process is complicated by the fact that, unlike human subjects, “dogs can’t tell you what they found confusing, and they can’t tell you what they thought was hard. So you have to take your best guess,” Spaulding explains. As a result, the researchers must often repeat the same test for months with many dogs.

Soon after Lily and Kelly leave, Mary Coates arrives with her dog Logan, a golden retriever who lumbers over like a friendly bear and grunts happily when I reach over to rub his back. He and Coates are led into the study room, and I watch on the screen as the familiar treat-hiding scenes play out with Logan. All I can see of Logan is his large nose at the bottom left of the screen, pointing attentively at the white buckets in front of him. Occasionally, he turns back to Coates for reassurance, but she follows the rules and keeps her eyes averted.

Despite some test results like Zoe’s, Santos says that after months of conducting the pointing test, the researchers have found that most dogs do respond to human pointing gestures. Michael Bogese, the lab’s current manager, explained to me that the ability to recognize human gestures is uncommon among animals. “Indeed, even our closest living relatives, chimpanzees, are very bad at the task,” Bogese says. But the CCC researchers still need to figure out which types of pointing dogs pay attention to, and the extent to which our gestures influence their decisions.

The “dog scientists” of Yale’s CCC are just happy to get treats, but in the meantime their owners are watching to see whether they measure up. They sit in the next room, hoping that their pup will be the one to prove dogs’ emotional genius. “I just know Logan thinks and understands,” Coates says after the tests are done. “And I love being part of something that validates that.”

The culture of fake IDs at Yale.…

The "Renaissance" of Yale's relationship with the U.S. military.…

The culture of fake IDs at Yale.

The "Renaissance" of Yale's relationship with the U.S. military.