Andalucía has fewer words than I do. One of my professors here tells me English has three or four ways of saying anything in Castilian, Spain’s most-spoken Spanish, the one we speak here, in Granada. Some say the ratio’s more like 2-to-1. The comparison gets harder when you think about all the country’s unofficial tongues—Basque, Catalan, Galician—but going by my five-pound Spanish-English dictionary, the limit’s on the Castilian side. Sometimes I like that about Spanish, that there’s less of it. Madura: it means both ripe and mature, and I like how the word cups all the touchable time, from beginning until the start of decay.

But I’m living in a university city where it took my friend Anabel a five-minute walk to think of more than three ways to say she had sex. First: foyar, to fuck, which young people use. Then the formal ways—tener sexo, tener relaciones sexuales, practicar sexo—which they don’t. Acostarse con, to sleep with, for an in-between. And a few minutes later we had me lo tiré, or me la tiré, depending on the sex of the direct object. That you can say if your friend points someone out in the street. I fucked him; I fucked her. The direct translation is something about throwing him to yourself.

So that’s six. “We are simple, I guess,” said Anabel. In America, we do all of those, besides admit to needing practice. But there’s enough vocabulary that I feel like half of my relationships are spent trying to decide how to classify our sex, if only to myself. We banged, screwed, nailed, made love. I tapped, hit, did. Got lucky, got it on, got busy, got down, got laid. Knew, in the biblical sense. Or him better last year.

***
The Spanish verb for taking a photograph is sacar: to take out or remove. You sacar la basura (take out the trash); sacar dinero (withdraw money); sacar parte del cuerpo (stick out a body part); sacar defectos (show someone the defects). In English, the language is similar—you take a photograph; it is taken. But there’s something about the added out that contributes to the feeling I often have in Granada of reaching for something that isn’t mine to take.

I don’t have the right language for the thing I’ve been feeling lately. It’s attraction, and intimacy, maybe; the word loaded comes to mind, as does potent, or ripe, though not mature.

I will be here for five months, and it’s been two and a half weeks now, only. I’ve had time to walk around with my camera. I’ve been around the Alhambra and the public gardens, with the peacocks; the old Jewish quarter; the white Albaicín. The other day I was following a road that curved along and inside a high school tucked into a hill, in Sacromonte, the sector on the far side of the mountain, where things are more residential. There were a lot of trees, and it was very quiet, and the gates had been open; but at one point there was a girl who saw me through the window of her classroom and I thought, what made me think I’m entitled to be here?

There is a tourist habit that I’ve noticed, and that I have, of visiting foreign countries and photographing doors, windows, and clotheslines. So European, how the bras are swinging around up there, the lace backlit by the sky. How the doors are colorful, and smaller, and the windows have shutters that people actually open and close. The clotheslines are especially exciting, like an open-air gallery where the artist’s intimacies haven’t even been abstracted. Visually, I like them, and I like the doors, and it’s my instinct—American or human, or personal, I don’t know—to claim what I see and like. I can’t help wanting certain colors or angles or gestures for my personal archives, so I have a small sketchbook, too, that I keep with me, especially if I don’t want to carry around my camera.

But it bothers me to see a woman come out of her home and catch me photographing her neighbor’s window, or her cat. Drawing seems better, but I don’t know if it is—better because old people think it’s charming, and that’s validating, maybe; or because laying something down in your own hand automatically denotes a degree of human error. You put yourself into it, you leave something behind. On good days, I decide that’s a compromise—that my drawing something is fair because I’m making something new, that belongs to me as much as it does to the subject I’ve refracted. On bad days, I think maybe it’s worse, that I’m assuming an intimacy that grants me the authority to re-interpret what I don’t understand.

I don’t feel like such a voyeur in America, maybe because there I’m only ever taking what feels like mine. This land is your land; this land is my land. In some defensible way, I’m only claiming what I already have. But Spain does not have these songs, or this sentiment. Or at least she hasn’t shared it with me.

And Granada, la granada, the pomegranate, the last kingdom left un-Christian: she’s the fruit at the foot of the front-right coffin-bearer, opened and crushed and stabbed through by his cross-topped staff.

I took a writing class last semester called At Home in America. We read personal essays and narrative nonfiction, all focused on the experience of being an American, in America. My professor quoted Joan Didion, often. “A place belongs forever to whoever claims it hardest, remembers it most obsessively, wrenches it from itself, shapes it, renders it, loves it so radically that he remakes it in his image.” Then we would go home and tried to lay verbal claim to what we were trying to see.

But now I am in a city in a country that people have been claiming, hard, for centuries. Conquest, re-conquest, inquisition, exile; centuries of constant inter-kingdom warfare. For a language with a third as many words as I’ve grown up with, Castilian has three words to match my “wall.” Pared, muro, muralla—the last one for the sweeping stone encircling medieval towns. You have to enter through an archway on a walled, uphill road—first turn to the right, so an invader’s right-handed sword swing hits wall. I saw one of these archways in Ronda. I took a picture.

And Granada: the Moors’ last stronghold in all of Spain, she finally gave herself over in 1492, the same year Colón gained Isabel’s consent for the conquest I know best. That was a few miles west, in Santa Fe, a town Fernando built to support Granada’s siege. I understood it all better at Colón’s tomb, in the cathedral at Sevilla. Four courtiers, representing his lifetime’s other four Spanish kingdoms, march in statue, each holding a corner of Colón’s coffin. And Granada, la granada, the pomegranate, the last kingdom left un-Christian: she’s the fruit at the foot of the front-right coffin-bearer, opened and crushed and stabbed through by his cross-topped staff. Pomegranates grow on trees here. When ripe, some open themselves.

***
At home, at school a year ago, my friend Jake told me he thought it was sad, the way people hooked up with each other and said it didn’t mean anything. That people got drunk and let themselves be public in their looking for intimacy, and everyone was looking for it, but then you woke up in the morning and nothing was there. I said maybe, not always. A lot of the time people just want that feeling of being wanted for a little. The two are not the same, always.

For a language with a third as many words as I’ve grown up with, Castilian has three words to match my “wall.” Pared, muro, muralla—the last one for the sweeping stone encircling medieval towns.

The other night a guy was walking me home, to the Spanish dorm I was staying at before I moved in with my host family. I started talking to him about a book I had almost packed but didn’t, because there wasn’t space. It’s called I Want to Show You More. I bought it on Amazon a while ago. From what I remember, it’s stories, I think about sex, written by a woman. I trailed off, though, when describing it, because I realized the only reason I was bringing it up was that I felt that way then, like there was more I wanted to show him, and I didn’t think I knew him well enough to tell him I wanted him to know me better.

Show is only half right. It’s a mixture of wanting to give, like give of myself, and show, and share. Express sounds like it should work, but it doesn’t. The word might be reveal, and in a question. How much do you want to see?

In Spanish, conquistar is the verb with which you win someone’s love. There are others—enamorarse con, amelcocharse, encampanarse (this one I like: it also means to become complicated, get difficult)—but conquistar is the one you can do to someone. In my dictionary from 1989, conquistador translates to three things: conqueror; conquering, in adjective form; and lady-killer. And I found one more word for sex: encamarse con—to sleep with someone, though without the con it means instead to fall ill or to be beaten down, like wheat, under wind or rain. 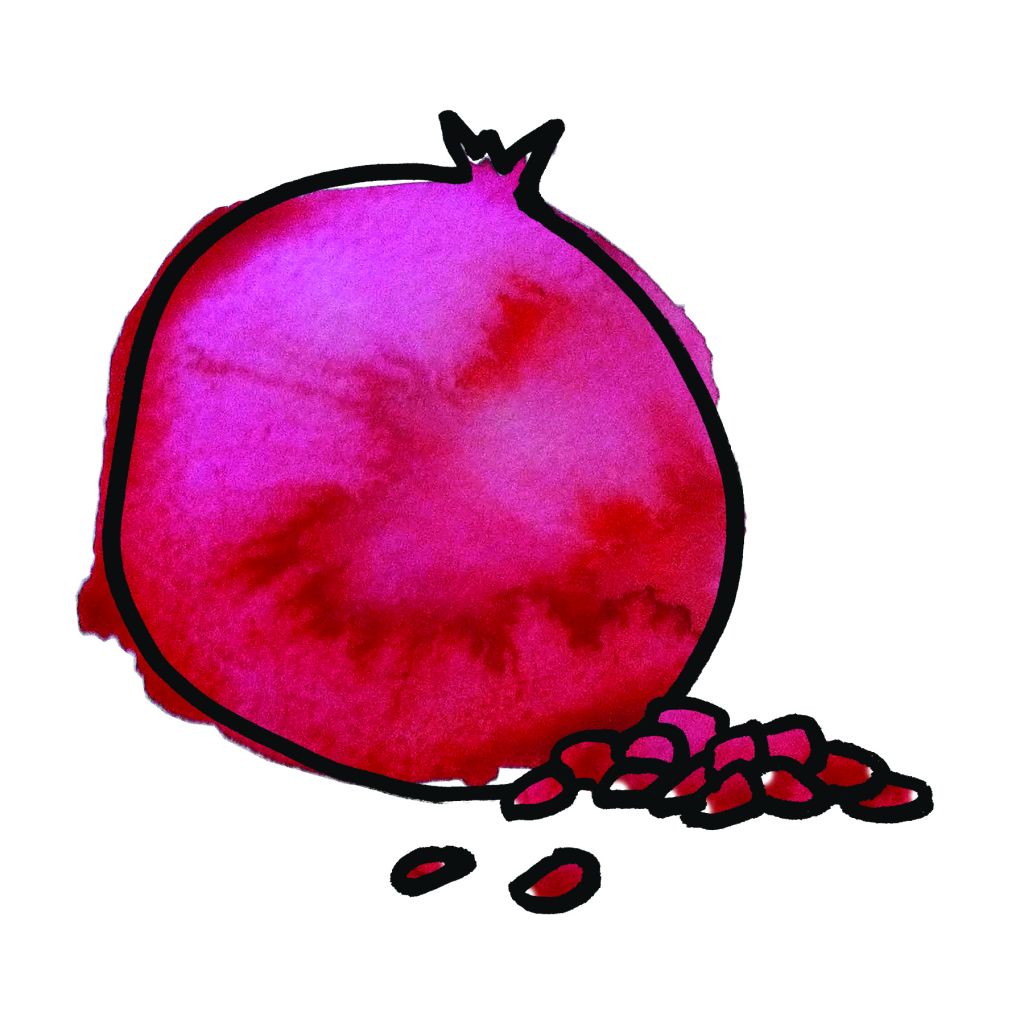 I have no problem saying a Spanish-dubbed 50 Sombras de Grey turned me on last night—though my learned vocabulary hadn’t yet covered “vaginal fisting”—but I don’t want to be conquered, or someone’s conquest, or even claimed, I don’t think. I don’t have the right language for the thing I’ve been feeling lately. It’s attraction, and intimacy, maybe; the word loaded comes to mind, as does potent, or ripe, though not mature. I understand it mostly as this strange desire to purge. Can I give you my writing? My drawing? My talking? Is it bringing you closer? This weekend there were so many things I had to keep myself from texting him. Thirty-four is Paloma’s lucky number, too. The colors in Ronda are incredible. Are you free tomorrow? I landed on what Simon from Belgium told me in the hostel in Sevilla: During the marathon of Marrakesh they give the runners oranges and dates at the checkpoints. Last night I got home and wrote down that I felt like a bowl of grapes. What does that mean? Purple and wet, and also dry? Tart, suede-skinned? Pluckable?

I don’t know, but now I’m touching my collarbone, and the question is how much he wants to see, and whether that will be more or less in an hour. How much of myself can I give to you? How much will you take?