New Bear On the Block 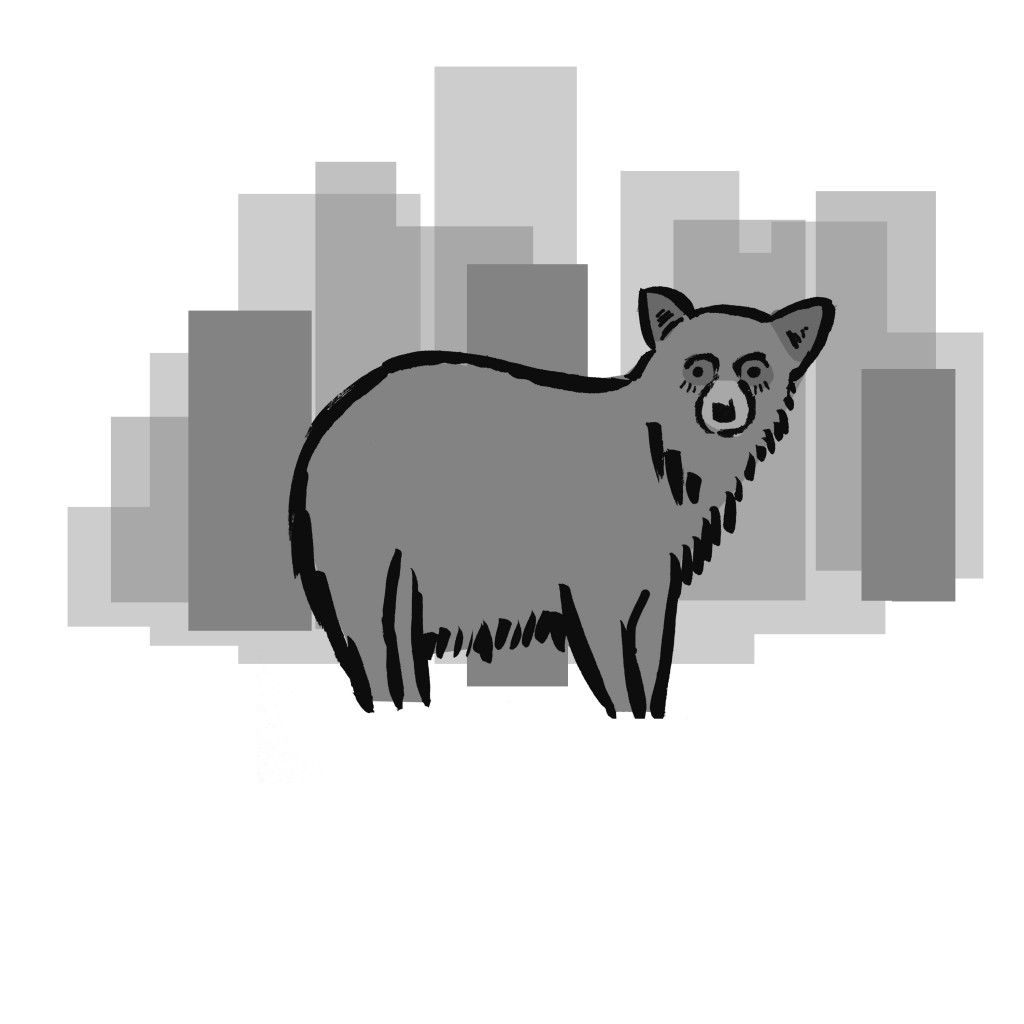 The black bear’s mother kicked him out of her den in northwestern Connecticut when he was seventeen months old, the equivalent of a human preteen. It was May 2016, she was ready to mate again, and black bears don’t usually hang around while their mothers prepare for new cubs. He had no resources, no skills, nowhere to go—just a nose for food and a desire to find females. Bears are a solitary and territorial species, and no one was trying to help him, either. If the bear entered his mother’s territory, she would chase him away. Every suitable habitat he found in the nearby woodlands seemed to be taken already by one of his standoffish kind. Some of his peers had given up on their crowded quadrant and journeyed far, reaching upstate New York, Long Island, and New Jersey. But this one wandered beyond the woods.

Wallace Street, New Haven: a quiet block in the Cedar Hill neighborhood near Wooster Square, overgrown with weeds that sprout from cracks in the sidewalk and crawl into the wooded grove that separates the street from I-91. It’s a street only two blocks long, where small auto-parts warehouses give way to modest clapboard houses between Grand Avenue and Jocelyn Square. Residents hose down their cars in the afternoon there, or lounge in beach chairs on their lawns when the weather is nice. What they don’t do, generally, is hide behind dumpsters and call for friends to pick them up—which is exactly what Wallace Street resident Tonya Hall did on May 9, when she spotted the lone adolescent bear in the grove near the highway.

“He was just walking along, and then he looked at me, and I was like, ‘Oh, shoot, a bear!’” Hall told the New Haven Register at the time of the incident. Fellow Wallace Street resident Oziel Melendez also saw him in his own backyard, and chased him out. The bear eventually ran up a tree, and a cluster of perturbed neighbors formed. The neighbors’ agitation upgraded the bear’s appearance from “sighting” to “contact,” and required the assistance of the Wildlife Division of the Connecticut Department of Energy and Environmental Protection (DEEP), whose staffers shot the bear with a tranquilizer dart and removed it from the immediate area. By the end of the day no one was hurt, and the bear, safely released into the nearest forested area, had been nicknamed Boo-Boo by the neighbors.

Residents of Connecticut’s more forested towns would scoff at any commotion over a single bear in the neighborhood. In Avon, which sits on the edge of Talcott Mountain State Park in the north of the state, there have been 580 black bear sightings since August 2015 alone. But in New Haven, a bear sighting is highly unusual. Luckily, Wallace Street seems unshaken: when I visited this July and asked residents on the block if they had heard of the recent bear sightings in the area, the replies were either “No” or “There’s a bear?!” But Boo-Boo’s brief New Haven tour represented a growing trend: people are spotting more bears in more areas of the state, including cities. There have already been 5,100 sightings in Connecticut this year, compared with 4,496 in all of 2015 and 3,003 in 2010. There have been eight in New Haven since 2010—one in 2011, one in 2015, and six this year.

“This has been a big year for human-bear conflict,” says Jason Hawley, a black bear biologist with DEEP. A mere sighting isn’t a conflict, he adds; there has to be some sort of direct, negative interaction between the bear and the human. Paranoid city dwellers might immediately assume Hawley is talking about attacks, which do occur, albeit very rarely. Just this past June, a woman finishing a marathon survived a bear mauling in a nature preserve near Albuquerque, New Mexico. But Hawley is referring to less grisly conflicts, ones that consist of bears rifling through a family’s trash, say, or killing livestock, or charging at someone and then running up a tree. While these sorts of encounters certainly aren’t innocuous, they don’t often happen in Connecticut. DEEP tranquilized and relocated only fifteen bears this year out of nearly five thousand sightings, making Boo-Boo’s a special case. Hawley says that incidents like the one on Wallace Street in May will only become more frequent. Why?

Much of Connecticut’s farmland has turned back to woodland in the past one hundred years due to the growth of industrial farming in other states and federal efforts to restore American forests. Black bears, suddenly sitting on a state full of suitable habitat, have expanded their statewide population to about seven hundred and ventured beyond their traditional northwestern quadrant. More unsettlingly, black bears are virtually indestructible. “Black bears have a survival rate of eighty percent,” says Hawley. “That’s unheard of for a wild animal. There are places where the human survival rate isn’t even that high.” Bears owe their success to their low birth rate and solitary nature: their population doesn’t grow so quickly that they strain their food supply, and they don’t interact with each other often enough to easily spread diseases that decimate other species.

As the wooded areas in northwestern and eastern Connecticut become more saturated with bears, young naïfs like Boo-Boo will more frequently find themselves in urban and suburban areas. While Boo-Boo certainly can’t make a den on Wallace Street, he was shrewd to wander there. People in cities outside of the state’s standard bear range don’t expect to see bears in their yards, so they leave their trash and bird feeders in tantalizing rows that bears can raid like a lunch buffet. With circumstances so favorable, there’s no reason for ursine appearances in New Haven to wane any time soon.

For the most part, the state doesn’t interfere with the bears’ rugged individualism. “Our job is to manage the bear population in Connecticut,” Hawley says. “But we don’t like to meddle too much. We don’t transport bears far away from where we found them. We think sightings are a good thing—they mean the bear population is healthy. Just let bears be bears. Let ’em do their thing.”

But Boo-Boo’s own resilience might become one of the greater threats to his survival: to keep the population in check, Hawley says, Connecticut is considering allowing a bear-hunting season. And when he ventures into urban areas, Boo-Boo is most endangered by the kindly people who try to lend him a hand. It’s not uncommon for bears to break into people’s homes these days looking for food, or to return to the same bird feeder night after night, waiting for mealtime. “When you feed them, you habituate them to humans,” Hawley says. “And that makes them aggressive.” Hawley laments that DEEP has already had to euthanize six bears this year that had become accustomed to approaching people. Closer interactions between our two species could give the phrase “human-bear conflict” a more sinister ring for both parties. If we’d like to keep both humans and bears alive, just about the worst thing we can do is try to make friends.