On his 784th day at Yale, John Chirikjian takes a picture of me in the bustling Branford dining hall. His camera is pressed close to his chest, and his dark eyes narrow. Then comes the click. Chirikjian pauses to compare this photo to the ten he has already taken today and to the thousands he has taken during three-plus years at Yale. He won’t show me the shot before he leaves, tucking his camera to his side, but hours later I will find my own photo online, where anyone can see it.

Chirikjian always knows precisely how many days he has been at Yale, because since the beginning of his freshman year he has taken a photograph every day and posted it in a public Facebook album (titled “‘Take it Slow’ ~ Dean Loge,” referring to the former Dean of Timothy Dwight college). The most recent photo when we spoke was the sixteenth photo of Chirikjian’s senior fall and the 783rd in the collection. A computer science major in Timothy Dwight—the site of his very first photo entry— Chirikjian began the project to share his college experience with his parents. Posting photos online, where friends and family expect to see them, keeps him accountable.

Chirikjian’s photos are meant to resemble a shared diary account of everyday life on campus. From his first breathless still taken on August 24, 2013 to a shot of a colorful summer night under the lights of Ashley’s Ice Cream Shop shop on September 16, 2016—the day before we spoke—Chirkijian’s photos are touching not only because of the moments they capture, but also because of their consistency. The album displays his meticulous devotion to Yale, shot by shot.

It feels strange and intrusive to study these photos as an outsider to Chirikjian’s private life—to feel a false nostalgia for another’s memory as you click through the collection.

“Every once in a while when I’m feeling sentimental, I’ll go through all the photos,” says Jordan Plotner, his close friend and freshman-year roommate. It’ll always bring me to this place of timeless nostalgia.”

There are moments in the album that could belong to any Yale student—photos such as Harkness (#166), Questionably Necessary Bag Checks At Bass Library (#432), HalloWoads (#569)—but there are also photos so personal that they might be best understood by close friends, or Chirikjian alone. There are his New Haircuts (#466), his Mustache Parties (#269), his Suite Teethbrushing (#194). His closest friends sparkle in these photos, pulling viewers into scenes that they have not experienced. It feels strange and intrusive to study these photos as an outsider to Chirikjian’s private life—to feel a false nostalgia for another’s memory as you click through the collection.

I need to ask for an explanation from Plotner on the Attempts to Bleach Hair w/ Teeth-Whitening Toothpaste (#467), for instance, which captures the reflection of Chirikjian’s suitemates gathered in a bathroom mirror, blow-drying their hair. “That pretty much sums up sophomore year,” he tells me. “Mev and Lukas dyed their hair blonde, Mev shaved his head, and Lukas tried to change his hair color with toothpaste. I was a somewhat passive bystander and Chirikjian was taking the photo. It’s an odd scene in which every single one of us is doing something that doesn’t make sense.”

Chirkijian insists that he doesn’t mind whether the pictures are popular in a social space or whether they rack up likes from peers. “I’m a social media whore…but I like to think that I’d choose a more intimate scene if it better represents the day,” Chirikjian says. He refuses to plan his successive shots, and takes several each day in search of the perfect candid.

Though he speaks of capturing intimacy, it often escapes him. Even the grainier iPhone photos that dot the album are tweaked for color balance, straining for faithfulness to reality.    “Ideally, every one of this series would be a candid scene,” he says. “But more often than not, if you pull a camera out, even if it’s just a phone, people become instantly aware of it.”

When Chirikjian takes my photo, I think about this authenticity. I know he is looking for a natural pose, but I can’t stop myself from smoothing the hair near my face. I know the photo will land on Facebook, where I am currently faceless.

Last April, I deleted my account because I had never been interested in following the lives of people I had never been close to. However, scrolling through Chirikjian’s album on the temporary account I made just for this purpose, I feel a sense of closeness with him that is unreasonable after only one interview. I know how his friend Gabe Eats Fries (#641), with the ketchup at the center of the paper plate, and I fall a little in love with the way Martha looks in the golden light of afternoon in Post-Run Last-Minute Shopping (#121). If I don’t feel like I really know Chirikjian, I know at least that I am not alone at Yale—that others, too, have Late Walks Back from the Library (#298), write Late Papers (#602), and sometimes feel as if the world is Cold and Desolate (Photo #646).

“Ideally, every one of this series would be a candid scene,” he says. “But more often than not, if you pull a camera out, even if it’s just a phone, people become instantly aware of it.”

In Timothy Dwight, where Chirikjian will hold a spring gallery show displaying his project, the community has embraced the shots as a shared album. It has become a point of pride, he says, for students in the college to appear in the photos.

Chirikjian himself, however, has a hard time remembering a lot of his photos save for his most recent additions to the album. He calls each photo a reminder of the day’s events, stimulating his memory, but he seems more concerned with the sense of measured time the photos lend him.

“Everyone here is doing so much,” Chirikjian says, and sometimes it overwhelms him. “You talk to any one person, and they’ll tell you some of what they’re doing, but often they’ll just forget because of the magnitude.” The photos, he tells me, help him understand his own progress.

So many of these pictures are gorgeously composed, capturing foggy nights in a dreamscape of soft lavender. Chirikjian is a serious artist, and I wondered, as I spoke with him, whether the album just amounts to a celebration of his numerous joys on campus. But if I wasn’t convinced that Chirikjian’s album is relatable, or completely naturalistic, I stop questioning once I finally find my own photo in the album, #784. I’m convinced I fit into what Chirikjian, in a low voice at the end of our conversation, tells me in his most pressing sense of purpose with the album title.

In the photo, I’m smiling wider than usual with a forced slouch. I want to seem comfortable, as if we’re talking casually. Looking at the photo, it’s easy to forget that Chirikjian, once the shutter snapped, left quickly; that he will take another photo, and another, and another, until he graduates; that we talked only once. But still, in between frames, there is a quiet moment to remember with him. 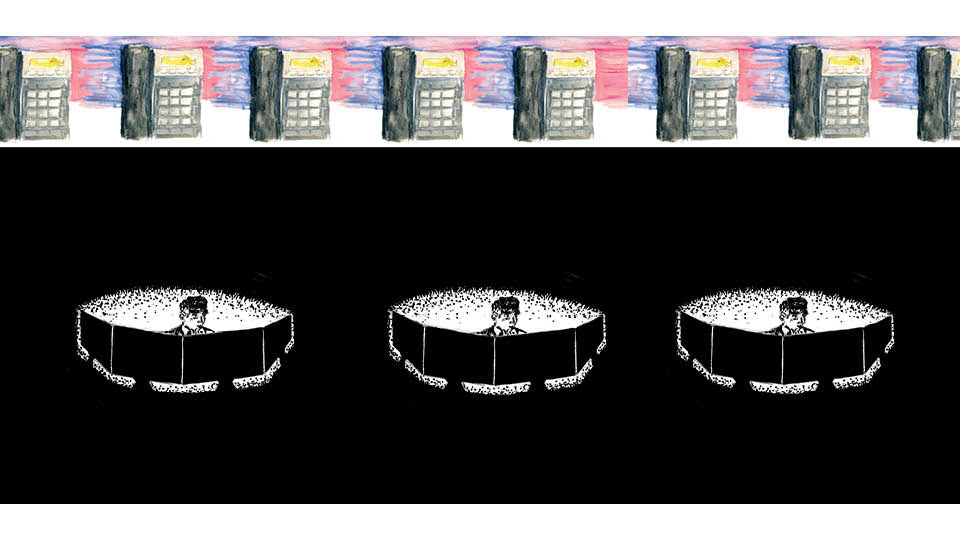 The People Who Pick Up