I Am The Man You Killed In the War, Back To Haunt You Forever In Panlist Form

It begins with an email. It’s from mailman.yale.edu, so it misses the spam filter and goes straight to your inbox. You get the notification during seminar, and you’re sitting right next to the professor, so for the next hour it sits there, unopened, unanswered. You hope that it might be your Lit professor getting back to you about her office hours, or maybe word on that internship you applied to last month.

Out of class, you pull out your phone and open it. “Welcome Newbies!!” reads the subject. That’s funny, you think. You don’t think you signed up for anything. You open it. Your eyes glaze over—it’s just a generic welcome email from some unnamed organization, full of quasi-ironic green Comic Sans and GIFs of Ron Swanson throwing up or whatever. You delete the email and go on with your day.

I don’t send anything for the next two weeks. That’d be too easy. You’d catch on to the game. But soon enough, in that same seminar, at that same time, you get an email from the same address. You give it a glance. It’s worse than the last one: you don’t really read the content, but you can see that the Comic Sans is orange now and much larger, and all the GIFs are from that one episode of Pokémon that gave all those kids seizures. That’s in rather poor taste, you think. Maybe I’ll unsubscribe.

So you do. You get two confirmation emails. Cool. You feel a rush of power. You feel as if you’ve won.

It goes on like this for a few weeks.

You unsubscribe again, but you’re starting to get more than a little weirded out. You email the IT department. Hey, you ask. Is there any way to remove me from this panlist? They won’t take me off.

Sunday night. You’re asleep. You’ve got class in a few hours. You hear a buzz. In the matchstick moonlight filtering through the blinds, you groggily reach for your phone. The subject line reads:

Without even thinking, you throw the phone across the room, and it shatters.

The next morning, you’re picking up the shards of glass, trying to figure out what the hell about this is making you so angry. Fuck, you think, it’s everything. Those rainbow fonts. The unrelenting onslaught of pointless cutesiness. Those fucking GIFs from TV shows you’re pretty sure never existed and also from Friends. Truly, God need not create Hell, you think; man has made it for himself.

On the way to the bathroom, you step on a piece of glass from your phone’s screen. It goes right through your foot.

You come back from the emergency room. You’ve already missed two classes today, and you’ve got three papers due in the next two weeks, so you know you’d better get to work.

In your inbox are six new emails. Five from the panlist; one from IT.

Dear sir, the last reads, Thank you for contacting Yale Information Technology services with your concern. However, removing a student from a mailing list is up to the discretion of the student organization sending the emails.

So you open one of the goddamn things. You scan for an email address to send a message to, someone to yell at. Zilch. It’s just you and mailman.yale.edu.

Did you try unsubscribing from the panlist? the IT email asks. You nearly break your laptop, too.

The emails come every hour now. Not at regular intervals. Sometimes there’s a gap long enough to make you think that maybe the deluge has stopped. Then you relax—big fucking mistake.

Now the messages include your name. Some of the emails start with it. They’re just vague enough that they could conceivably be form emails. But just.

Your friends are getting tired of you asking them about who’s behind this panlist. I don’t know, says Esmé. Maybe it’s a religious thing? Fucking Carl asks why you don’t just unsubscribe, so you punch him right in his pudgy face in the middle of your Politics of Knowledge in Latin America seminar.

Another month. Maybe two. You can barely tell any more. You can barely sleep these nights. The GIFs begin to follow you into your dreams. I’m creative and fun and quirky! they say. I epitomize millennial vapidity! Don’t you just think I’m the fucking greatest?!

Then came the first email you missed, but Jesus, was it a doozy. From your ER&M prof. We need to discuss your paper, it said, you found out later. You never made the connection, because you stopped checking your inbox. This happens a few times. You’d know your grades were dropping if you checked your emails.

You’re isolated. You don’t look at your texts any more after someone added you to this inscrutable group message called “THE SCROD SQUAD ;););)”. Oh God, you think. It escaped the email server.

You miss class. You aren’t eating enough. One night, you claw the modem out of the wall in a fit of madness.

Sometimes, you try to sleep and all you can hear is the MIDI version of “Trap Queen” that they attached to one of the emails. More than once, you watch the sun rise on another weary day, your trembling hands clutching the blanket, and all you can think is, Shit, did I miss SlorpF.E.S.T.?

When ExComm finally comes calling about your failing grades, they know well enough to visit in person.

Next September. You’re back home, living at your parents’ house. You’re stable. You’re doing fine. You work part-time as a barista. The medication is working. Everything is just A-okay. There are at least some days when you don’t vomit the second you see WordArt.

You’ve applied to a couple of new schools. Explained that you had a nervous breakdown but you’re doing much better. You should be hearing back about now, you think. So, you check your email.

And as you lie there on the floor, convulsing in fits of agony, you will think, finally, of the mist along the hedges that day near the coast. You will think of the blood, the face you barely glanced at. The name you never cared about.

You will know now what you should have known long ago: that sometimes, the dead don’t die. That sometimes they merely transmigrate into a semi-nonsensical string of cat memes and garish slang and ceaseless invitations to stop by a pitch meeting. That the unsubscribe button is just a cruel trick, like a knife to the back or shopping period. That this is your life now. That you are condemned to my world of ceaseless badgering and sub-Upworthy attempts at hip twentysomething humor for all eternity. That you will forever suffer my revenge. 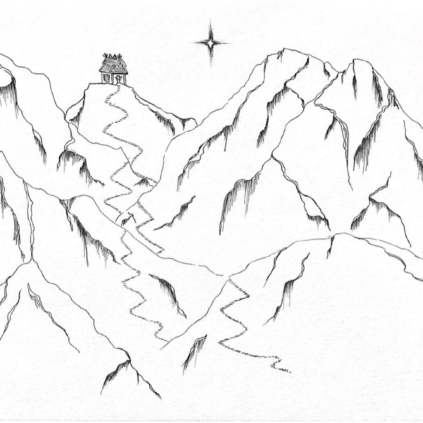 The Sandal and the Star