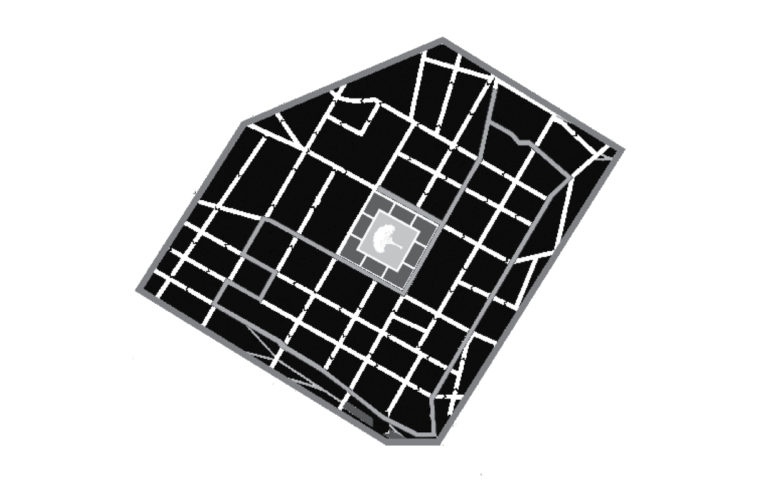 “Welcome to the Town Green District!” says Win Davis, Town Green Services’ Executive Director, sitting against an office wall branded with the organization’s logo as he smiles mildly at the camera. “Let’s look at some of the meaningful ways that we make downtown New Haven a better place for everybody.” Shifting images fill the screen: a lamp-lit thoroughfare, a crowd gathered to watch a broadcast of the World Cup. Scenes of hardworking “downtown ambassadors” hanging potted plants and sweeping sidewalks alternate with testimonials from local officials and professionals. In one clip, a bridal shop owner stands before a rack of red and blush dresses.“Developing the neighborhood helps everybody,” she says.

Created in 1996 through a ballot referendum, the Town Green District encompasses an L-shaped twenty-seven square-block area cradling its namesake, the New Haven Green. Town Green Services –– the organization that created and oversees the District –– aims “to improve ownership values by making Downtown New Haven an internationally competitive urban environment,” according to its mission statement. A private organization with paid professional staff, Town Green Services collected $1.3 million last year from surtaxes placed on New Haven businesses, but it also receives annual contributions from Yale and the City of New Haven, who contributed $140 thousand and $50 thousand in 2017, respectively. These funds are used for cleanup and beautification initiatives, events, marketing, and the salaries of downtown ambassadors: representatives who patrol Downtown in blue and yellow jackets.

These ambassadors share office space with the New Haven Police Department, but they don’t have the authority to enforce law. Instead, they contact officers-on-duty about “quality of life infractions,” which include public intoxication and “aggressive panhandling.” In our interview, Davis said that contacting police officers helps the ambassadors respond to issues downtown. “But,” he continued, “it also helps us, because people know that when we make a call on our radio or on our telephone, action will come of it.”

Quality of life violations also include behaviors like urination and defecation. Locals experiencing homelessness once had access to public bathrooms on the Green, but Town Green Services had them removed, claiming the bathrooms sheltered drug deals and prostitution. Homeless individuals may now use only public bathrooms in the public library and City Hall –– when they’re open –– or else gain access to business bathrooms, lest they incur a fine by relieving themselves in public. Under a 2015 collaboration between the city police and Town Green Services called Project Green Thumb, indigent people cited for quality-of-life infractions were enrolled to clean and beautify the District in lieu of paying a fine. Town Green Services abandoned the initiative when the supervising officer was reassigned.

Though the organizations’ main constituents are its surtax-paying business owners, Davis, born and raised in New Haven, affirms it benefits all locals. He recalls the mid-nineties, which preceded Town Green’s conception, as a “real tough time for New Haven,” citing gang violence on Chapel Street and low property values. In addition to “stabilizing” downtown, Davis claims, the Town Green District relieves low-income residential neighborhoods of tax burden because it comprises a disproportionate 12 percent of New Haven’s tax income –– a number he hopes will rise. “As this neighborhood goes,” he intoned, “so go the rest of the city and the residential neighborhoods.”

Not everyone agrees with Davis. Laura Barraclough, a professor of American Studies at Yale, rejects Town Greens Services’ everyone-wins mantra. “Simply suggesting that increased growth in the downtown area is going to benefit everyone is inaccurate,” she said, noting that money generated by wealthier neighborhoods tends to be reinvested there.

Although Barraclough acknowledges that Town Green is partially a symptom of underfunded municipal governments, she situates it within a troubling trend guided by neoliberalism.  Since the seventies, she said, there has been a growing belief that urban governments are neither efficient nor effective and that “the private sector could do better.” As private organizations driven by economic interest take over functions traditionally carried out by the city, Barraclough said, marginalized people, including those experiencing homelessness, are harassed, criminalized, and driven out of public spaces.

Business owners and managers in the Town Green District have different ideas about how to treat members of these populations, many of whom solicit money in and around their stores. Leila Crockett, who manages the employee-owned Artist & Craftsman Supply store on east Chapel Street, said she thinks addressing solicitors should involve “providing housing, for a start, for people who don’t have a place to live, services for people who don’t have enough to eat, services for people who have addiction issues.” She acknowledges that “panhandling makes some people really uncomfortable,” but advocates a compassionate approach to interacting with solicitors. “My advice is to treat people who are panhandling like any other person,” she said. “It generally doesn’t bother me, as long as people are polite.”

Munaza Ali, who has managed Pitaziki Mediterranean Grill since it opened in 2014, thinks Town Green Services isn’t doing enough to monitor panhandling. “Homeless people walk into my store every day and panhandle,” she said, seated in the restaurant on a Thursday night. “The only changes I’ve seen [made by Town Green] are recycling bins.”

But Town Green Services is trying to reduce panhandling. Each of its last four annual reports touts statistics of “panhandling interventions”: in the 2017 annual report, that number is 6,791, a 55 percent increase from 2016. During our interview, Davis delineated two types of panhandlers: “passive” and “aggressive.” He describes “passive panhandlers” as solicitors sitting or standing by storefronts. In the District, they must receive permission from shopkeepers before soliciting money in front of businesses. If they don’t have permission, ambassadors ask them to move. Meanwhile, Davis defines “aggressive panhandlers” as people soliciting money who “refuse to take no for an answer” or make physical contact with pedestrians, and “make you feel so uncomfortable that all of a sudden it feels like nothing to pull a dollar out of your pocket just to get that person away from you.” When encountering such solicitors, ambassadors are instructed to give warning before calling the police, sometimes even following solicitors so the police can find them.

“The ambassadors are snitches,” said a former machinist who has been homeless for four years, waiting in line for lunch on a Sunday outside Trinity Church on the Green. He said that ambassadors contact the police even when they find people sleeping on the Green. While ambassadors may intend to connect people sleeping outside to shelter, the former machinist, who wished to remain anonymous, sounded frustrated by these encounters. Town Green Services’ mission to make the downtown area prosperous may work at the expense of community members experiencing homelessness, who often cannot patronize the businesses the District was created, in part, to support. “If you’re homeless,” said a disabled former carpenter after collecting parcels of food, “you’re looked down upon, no matter your circumstances.” Despite Win Davis’s greeting, not everyone feels welcome around the Green.

— Talia Schechet is a junior in Saybrook College.