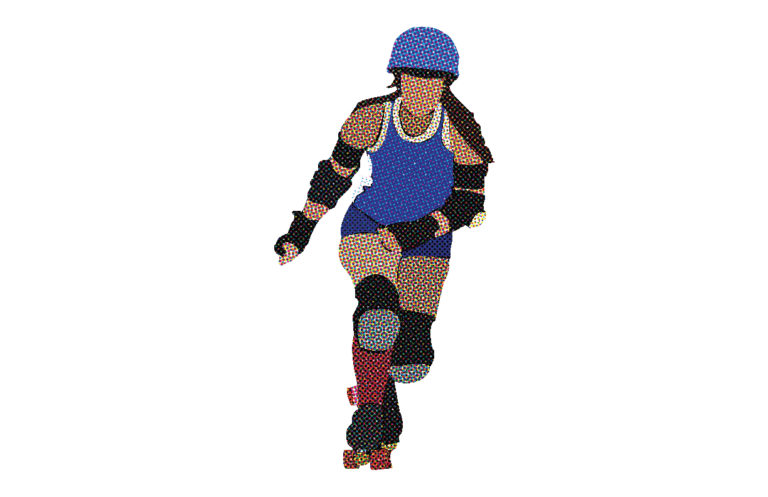 I (Almost) Got Clobbered By Your Mom

Krazy Legz Nikki is barreling down a flat track in quad skates, looking for Your Mom. Your Mom, a blocker, has a decision to make: she can either help Legz, her jammer, carve through a glut of skate-wearing women, or she can get in the way of the opposing jammer, Sass Squash. To make it through unscathed, Legz will have to “dance by” Lehigh Valley’s blockers using the precise footwork she’s been practicing since 2012. Or she can just barrel right through.

“We prefer just running people over, in all honesty,” Legz admits after the bout.

I drive to the Connecticut Roller Derby Travel Team Double-Header (one match between the CT All-Stars and Lehigh Valley, the other between the CT Yankee Brutals and Shoreline Bella Donnas), fully expecting to be one of maybe thirty or forty spectators. But when I arrive at the Insports Center in Trumbull, Connecticut, the parking lot is full, and I am forced into parking behind a caravan of cars down the street. After ten minutes waiting in line for a ticket, I am greeted by a maple hardwood floor the size of three basketball courts, two commentators, an elaborate sound system, and a projection screen displaying the score. Dozens of vendors line the gym and hundreds of people—from grandchildren to grandparents—sit around the track in home-brought portable chairs brought from home. I didn’t realize this was BYOC.

I sit close to the track in an area called “The Danger Zone.” You must be eighteen to sit here because there’s a possibility that one of the roller girls will careen off the track and crush you and your ice-cold Coors Lite. Before I have time to evaluate the risk of my seating location, the buzzer sounds and the bout begins. Eight women, all wearing skates, knee pads, elbow pads, and helmets, begin bodying each other for position. Two skaters, one from each team, fly around the back straightaway. The crowd rumbles in their portable chairs. Perhaps this is not such a niche sport after all.

In 1935, roller derby was basically a cross country endurance race. Teams of two would circle around a banked track over and over, covering three thousand miles in total, approximately the distance from New York City to Los Angeles. After realizing crowds enjoyed the collisions more than the skating, Leo Seltzer, the sport’s founder, tweaked the game to add more physical contact. It took off.  By 1949, the National Roller Derby playoffs sold out Madison Square Garden for an entire week, and the sport was broadcast on CBS. When that contract expired, ABC started televising games. But by the early nineteen-seventies, the sport sputtered out. The 1973 oil crisis made it prohibitively expensive for teams to travel, and the Roller Games’ International Skating Conference’s uncompetitive, circus-like approach to the game turned off fans.

In 2000, Daniel Eduardo Policarpo, also known as “Devil Dan,” attempted to re-ignite the sport as an all-women roller derby-themed spectacle with winners selected before the match. After a highly suspect logistical meeting in a bar, the recruited women decided to ditch Dan and form their own organization: Bad Girl Good Woman Productions. They changed the rules and formed a league. Winners would no longer be pre-ordained. Now it wasn’t just a show; it was a competition. And it wasn’t “women’s roller derby” –– it was just roller derby. (Men’s derby exists, but it’s not nearly as popular. For men, there’s a wider range of highly physical, competitive outlets to choose from. Roller Derby is also one of the only sports that allow trans athletes to compete as women without undergoing hormone therapy, distinguishing it from any Olympic event.) The sport continues to grow in popularity. In 2006, the CT Roller Derby began with about fifteen skaters. Now they have about sixty-five.

Roller derby consists of two thirty-minute halves, each broken up into two-minute sections called jams. Each team plays with five athletes at a time, and there are two main positions: jammer and blocker. The jammer’s goal is to score, which she does by weaving through a horde of blockers and lapping members of the opposing team. Blockers, four on each squad, play offense and defense at the same time. They help their jammer get through the pack and prevent the other team’s jammer from doing the same. At the end of each jam, new jammers and blockers switch onto the track.

The game shifts between fast and slow. All-Star jammer Black Cherry weaves, hops, and sprints through small holes in the Lehigh Valley defense. Legz looks for an opening and pile-drives through. At times, the jammer gets stuck behind a wall of opposing blockers. When Black Cherry hops over a defender’s outstretched leg, the crowd cheers.

About ten years ago, the sport was high-speed and punk-rock. Players drank beer before matches, wore fishnet tights, and pummeled each other. Roller Derby was little more than flying around the track and laying hits. Derby names –– Your Mom, Krazy Legz Nikki, Puke Skywalker –– are a carryover from this campy era.

“For a long time it was just skate fast, turn left,” Smith says. “It was never a show, it was never pretend … but over time it’s changed from a game where people go as fast as they can to a game with strategies and formations.”

Today, players treat the game more seriously. The CT All-Stars practice three days a week, two hours each day. They practice formations and watch tape. Athletes on the All-Stars are also expected to cross-train outside of practice –– weight lifting, running, core workouts. If you’re not strong, you’re more likely to sprain an ankle, break a clavicle, or tear an ACL. Almost every athlete I talk to, from Scorin’ Kierkegaard to Midwife Crisis, has an injury story; during the match, I notice All-Star Captain Puke Skywalker standing on the sideline with a walker.

The bout ends with a score of 287–153, a convincing All-Star win. But they’re not done for the day. After they change out of their game uniforms, they’ve got other jobs to do. Some coach the B-team, the Yankee Brutals. Others walk around the court selling raffle tickets to keep the nonprofit club afloat. Players, refs, coaches, announcers, and staff are all volunteers.

Holding a jug of 50/50 raffle tickets amidst the noisy crowd, Krazy Legz Nikki finds some time to talk. “So you’re gonna write about how awesome we are? On and off the track? Should I put my hair down and try to fluff it up? Don’t mention the sweat—or the pops and bruises.” She points out a welt on her shoulder that seems to become darker each minute I talk to her. “This one’s gonna be good if you want a picture of that.”

Jacob Sweet is a senior in Grace Hopper College.