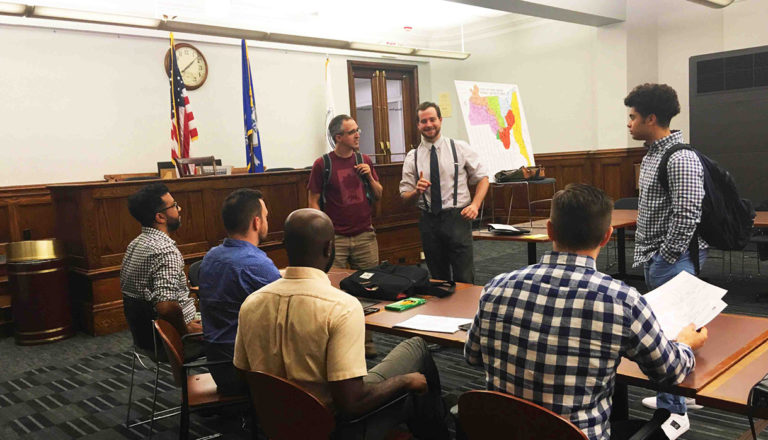 One evening in late September, I walked into the Aldermanic Hearing Room on the lower level of the New Haven Hall of Records. The room’s walls were lined with maps, planners, and varnished wood trim. Michael Harris leaned against a table as he chatted with the people gathered at the front of the room. When all twenty-six students had arrived, Harris pointed to a city map and requested that we each find our ward. Then, he thanked us for coming, and class began.

Harris was leading a session of Democracy School, an initiative founded by then-New Haven mayoral assistant Kate McAdams in 2002 to provide New Haven residents an opportunity to learn about the workings of city government. The free, eight-week, application-based course hosts just over two dozen New Haven residents each fall. Each class session focuses on a specific city department, and Harris, who has run the program since 2015, invites relevant officials and city residents to discuss their work. Harris also serves as Special Assistant to Mayor Toni Harp, and was consequently well-positioned to explain the basics of governance and city funding and lead discussions on emergency services, New Haven’s education system, and city neighborhoods. A red-haired man with clear eyes and a perpetual grin, he is an enthusiastic teacher. “Did you know that New Haven has thirty alders?” he asked during an informational presentation at the Tsai Center for Innovative Thinking in May. “That’s crazy. Almost no city in this country has close to that many elected officials representing the interests of their constituents.” Inspired by that presentation, I applied for the 2018 session and in the fall, I joined Democracy School’s sixteenth class.

This fall’s course underscored the challenges, big and small, that drive the work of city officials. During one lesson, Doug Housladen, the Director of New Haven’s Transportation, Traffic, and Parking Department, told students that only 27 percent of jobs in the Greater New Haven area are within a one-way 90-minute commute from New Haven on public transit. Much of the problem, he explained, is in the city’s excess of bus stops: 4,000 in a region with an estimated need for only 2,500. As busses make unnecessary stops, commutes drag on and on.

The classroom also provides a space for residents to discuss the tensions of life in a highly segregated, budget-strapped city. One student, a woman in her forties who works with substance abuse rehabilitation services in New Haven, asked Maurine Villani, a tax collector who presented during one class this fall, about the city’s contracted tow-truck companies. “I’ve lived in New Haven all of my life, and in many different types of neighborhoods in the city,” she said. “It seems like your vendors disregard tax-delinquent vehicles around Yale—and I know that they’re tax delinquent—yet tow lots of the vehicles, even non-tax-delinquent ones, in neighborhoods that are far from Yale. They took my car once, and it wasn’t tax delinquent,” she said. Villani didn’t quite know what to say.

Nearly every class discussion of the Board of Alders or the city budget this fall circled back to the frustrating nature of “functional home rule.” In the context of New Haven, functional home rule means that the city has limited autonomy over its legislative processes because municipal rules are largely defined by the state. For example, the Connecticut Constitution limits cities’ tax revenue-raising power to property taxes––an issue Harris and four city officials raised during the second class. This limit on taxes presents a challenge for New Haven, where 54 percent of local property is designated tax-exempt. Yale University alone represents about 2.5 billion dollars of non-taxable property assets; the growth of its property holdings continues to reduce the city’s potential revenue. And despite the city’s obvious fiscal challenges, the state continues to allocate fewer and fewer state funds to New Haven. The city’s public education system has particularly struggled. Its schools, which serve the largest student population of any district in the state, faced a $19 million budget deficit this spring, forcing firings and school closures. In class, Harris and New Haven Controller Daryl Jones explained that last year, the city was forced to make these cuts because state and property tax revenue had shrunk so much.

This year’s Democracy School attendees ranged from high school students to an Escape New Haven employee to a retiree who had worked at a New Haven telephone company for decades. Some had just moved to the city, while others had lived in New Haven their entire lives. Still, the student body represented only twelve of the thirty wards; most students hailed from wards closer to downtown. To address this issue, Harris said he hopes to create an online curriculum that makes the course readily accessible.

Democracy School’s alumni include many young and active community members. Caroline Smith, who graduated from Yale in 2014, said the course taught her that “the foundation of any good project is relationship-building.” She now coordinates New Haven Bike Month, participates on several city committees, and co-founded Collab, which helps local residents pursue entrepreneurship. Democracy School helped her form connections to local officials and students, facilitating her community-based work, she said. Johnny Shively, a 2015 Yale graduate, works for SeeClickFix, an app that allows users to report non-emergency issues, such as problems with infrastructure. He told me that learning the terminology of city governance has helped him engage with New Haven politics. John Martin, the founder of the popular Bradley Street Bicycle Co-Op, said that he tries to informally foster the program’s values—connectivity and agency—at the Co-Op. The course, he said, gave him the confidence and agency to serve as a community leader. In the face of massive economic challenges, former students are waging efforts to create economic opportunity, to help the city run, to bring people together. If New Haven is “a city that is fighting for itself,” as Caroline Smith put it, Democracy School is evidence of the city’s hopes for victory—and the stalemates its residents face.

—Carina Gormley is a junior in Morse College.