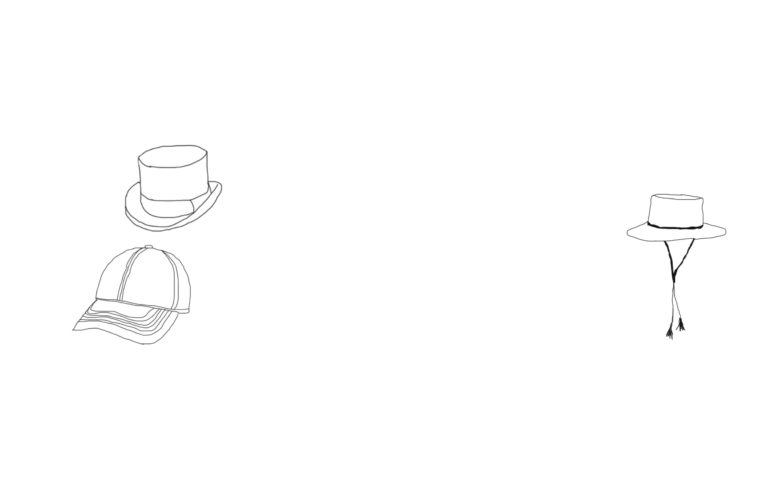 A Good Hat is Hard to Find

“A hat is a timeless piece,” Ben DelMonico declares. The manager of New Haven’s DelMonico Hatter sits across from me in Java Café with a mint tea, tapping the visor of his grey wool baseball cap. His hat — a Wigens, he informs me — complements his crisp button-down and grey wool sweater. Ben chooses his words carefully, massaging one hand with the other as he focuses on a point over my shoulder. The 44-year-old New Haven native isn’t used to being interviewed. The last news coverage of the business was in 2017, when the New Haven Independent showed up to document an unusual customer: a possibly-rabid possum, which Ben had to call the police to remove. The possum might have made a good hat, but it certainly wasn’t going to buy one.

In the early twentieth century, there were twenty-seven hat stores in New Haven. Now there is only one. Established in 1908 by Ernest DelMonico, senior, DelMonico Hatter sits at 47 Elm Street, a block southeast of the Green, between a menswear shop and a rubber stamp store. Ben is part of the fourth generation of DelMonico hatters –– his father and grandfather spent their whole careers behind the counter. As a young boy, Ben helped out in the store over the Christmas holidays, but he didn’t return to it until about five years ago, when his father, Ernest, asked him to come home to help run the business. Since Ernest’s death last year, Ben has taken charge.

From the street, you might mistake the store for a tea parlor. A large, colorful sign graced by an enthusiastic Mad Hatter hangs in front. Displays of carefully-posed hats in the windows hearken back to a time when one may have casually left one’s derby on the dressing table or one’s bowler on the baby grand. DelMonico’s stocks forty-seven types of hats, from sombreros to skullcaps. You, too, can suavely drop their names (Tricorne, anyone? How about a pork pie?) by consulting the store’s newly updated online glossary, designed to act as translator for a younger crowd unfamiliar with hat lingo. When you do, you will learn, shockingly, that the first incarnation of a beret debuted in the Bronze Age, and, less shockingly, that “the core purpose of the helmet has remained the same, to protect the head from injury.”

Ben’s desk is at the back of the store, behind labyrinthine rows of hat racks and hatboxes. DelMonico’s assistant manager, Christina Urdanivia, and retailer, Vijor McCray, huddle around a countertop computer opposite him. All three are on the phone with customers. “What was your last size? What color?” they ask. One hat is going to South Africa.

When she finishes her call, Christina offers to show me the back of the shop, where they resize, steam, and flatten hats. Behind Ben’s desk, we enter a museum of perfectly preserved millinery equipment. Lining one wall are small wooden busts of head circumferences, disk-shaped, almost like tree rings. Christina points to the hat-steaming machine, a voluminous, aluminum mushroom cap connected to a shaft. They don’t do as much in-store repair work, she tells me; they don’t do much in-store business, period. Ernest DelMonico wisely embraced the dot com boom in the early 2000s, ahead of the curve for the hat world. Most of their sales are online, with clients from out-of-town and abroad.

People just don’t wear hats the way they used to, Ben explains. The turning point for hat culture in the U.S., he says, was January 20, 1961: John F. Kennedy’s inauguration. Kennedy was the last President-elect to emerge from his motorcade wearing a top hat. After he was sworn in, Kennedy, one of the most photographed men in the country, seldom donned a hat. The public subsequently christened him “Hatless Jack.” The majority of American men put their hats on the shelf, and the industry petered out. Now, hat-wearers in America are an eclectic group, equal parts ardent traditionalists and bold statement makers.

Ben manages DelMonico’s daily operations, and Christina, a five-year veteran of the industry, provides abundant enthusiasm. (She tells me, “You need to find the right hat for the shape of the face, but also the right brim, the right color.”) Vijor, age twenty-two, is the entrepreneur. While I talk to her, she deftly runs through shipping receipts, organizing and cataloguing them. She’s wearing a sleek black tracksuit and her hair is pulled into a neat ponytail. It’s only her fourth day on the job, but she’s already cased the joint, and she has ambitious plans for the business’ future. “Our new photo shoots are going to be bold, daring,” she says decisively. “I think hats, all different kinds, should appeal to a younger clientele.”

The homburg, for instance, may be staging a resurgence. It has a tipped-up brim and a defined center dent. First popularized in the 1890s by King Edward VII of England, it is known as the “Godfather Hat,” after Marlon Brando in the movies. It’s also the hat of choice for one of DelMonico’s most loyal customers, Ramblin’ Dan, a popular Connecticut bluegrass player and the proud owner of a DelMonico white straw homburg with a small feather in the cap. He wears it all the time, according to a post on his blog. When he first left the store with it, he reports, a man across Elm Street shouted “NICE HAT!”

Dan isn’t the only local celebrity who gets his headwear from DelMonico’s: Mayor Toni Harp has been in a few times, usually to buy a Betmar, Ben tells me. Congresswoman Rosa DeLauro, of Connecticut’s third district, recently purchased a Borsalino. On one occasion, Yale President Peter Salovey dropped in to buy a traditional straw-brimmed Panama hat.

Local customers are appreciative of the store’s history. That’s what matters to Calista Washburn, Ben DelMonico’s niece, who will start college at Yale in the fall. She helped out over the Christmas vacation, the store’s busiest time of year. “So many people came in and told me about buying hats from my great-grandfather,” Calista tells me over the phone. I ask her if she wears hats herself. “To be fully honest, I don’t like hats. Maybe the odd baseball cap,” she confesses. “My grandfather, though—now there was a gentleman who really wore hats.”

A happy customer leaving DelMonico’s has to weave through rows of classic hats –– a reminder that they’ve just bought into a history of sophistication and elegance. Walking out, I think of Rosalind Russell, the 1940s film star in “His Girl Friday.” She plays a gutsy female reporter with a silk-padded chevron-striped top hat — one I could see on a bolder version of myself.