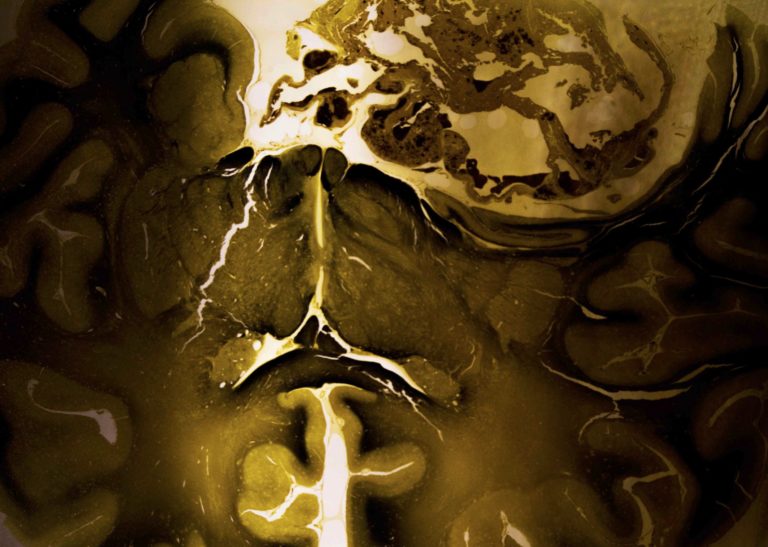 Kate Christison-Lagay grabbed a rubber brain off a countertop in the basement of Yale School of Medicine’s library and pried its two halves apart so that we could have a look inside. As a postdoctoral fellow in Dr. Hal Blumenfeld’s research lab, Christison-Lagay studies sensory perception, which she and her team believe can provide a model for human consciousness. She speaks seriously and energetically about brains, and clearly knows her way around one. After separating one of the lobes, she pointed to a small area marked in purple. “Here’s the first stop when someone sees something: the primary visual cortex,” she said. As she traced her fingertip forward through the cerebral cortex, I realized that the image of her moving finger was travelling down the very same pathway inside my own brain.

Behind glass panels lining the walls around us, hundreds of other brains—real human brains—floated in jars of formaldehyde. Many were whole; others had been sliced to pieces like melons. They all shone a ghostly white through the ambient yellowish solution. A century ago, these brains belonged to some of neurosurgery’s first patients. Once transferred into jars, they experienced second lives as a reference library for brain researchers and doctors. In their current incarnation, they form the centerpiece of a one-room museum dedicated to the man who originally operated on them, and collected them from his deceased patients: Dr. Harvey Cushing.

“He was a really big deal,” Christison-Lagay said, leading me through the Cushing Center, as the eerie underground space is known. “He was able to reduce the mortality rate associated with brain surgery from around 80 percent to 10 percent.” In addition to the brains, the Cushing collection includes thousands of glass-plate photographs, microscopic slides, and journal notes, testaments to the doctor’s meticulous research practices—and the many advances he pioneered in modern medicine, both at the operating table and in the laboratory.

A couple of weeks after our visit, I sat in a small basement room across the street from the Cushing Center, staring at a computer screen full of static. My chin and forehead rested on padded bars, while a pair of adjustable lenses held my gaze from across the table. The robotic device, called a pupilometer, was learning to read my mind.

Christison-Lagay and her colleagues in the Blumenfeld lab are working on solving one of the brain’s greatest mysteries: the physical basis of consciousness. They haven’t cut into any actual heads; rather, with the help of advanced imaging technology, they’ve been able to pinpoint electrical activity within the brain almost down to the level of individual cells. About a year ago, they published results from a breakthrough experiment, which involved flashing faces onto a computer screen and recording participants’ brain activity in response to the visual stimulus with an EEG (electroencephalography) test.

The researchers are worried, however, that they may have switched on more of the brain than they intended to. They had asked participants to press a button indicating whether or not they had noticed the faces popping onto the screen. As a result, the researchers can’t be sure how much of the brain signal they recorded came from the simple visual perception of the face, and how much came from the participants mentally preparing to report what they’d seen. “We’re potentially conflating two different events,” Christison-Lagay explained.

The set of trials I was taking part in was supposed to help lay down the groundwork for an improved experiment, which the team has dubbed “the no-report paradigm.” Through a stream of white noise accompanying the fuzziness on the screen, I strained my ears to listen out for fleeting sounds, like a whistle, a water droplet, or a laser zap. I pressed a button whenever I heard something. In the meantime, the pupilometer kept tabs on my eyes. According to Christison-Lagay, “our pupils change size clearly in response to light and the things that we’re seeing, but they also change based on our physiological arousal state.” In other words, by comparing my pupil dilations to the responses I was giving on the keypad, the pupilometer was figuring out whether I’d had a conscious experience without me having to report it.

Hal Blumenfeld has spent most of his career working with epileptic patients, performing surgeries and helping to develop treatments. Epileptic seizures often involve a disruption of consciousness, and Blumenfeld believes that insights into the workings of healthy consciousness can “point the way toward possible therapies for when consciousness is abnormally affected by disease processes.” If a conscious network is shut down by a seizure, for example, doctors may be able to electrically stimulate that area if they know exactly where it is, and turn it back on.

In 1934, Harvey Cushing retired from medical practice to New Haven, and brought his brains with him. He died four years later, but neurosurgeons continued to consult his data base for decades. Once CT scans and MRIs hit the scene in the nineteen-seventies, however, the brains were relegated to cramped storage shelves in the basement of the School of Medicine dorms, where they received only late-night visits from thrill-seeking students. In 1994, a Ph.D. student named Christopher Wahl approached his advisor about writing a thesis on the historical legacy of the brains, and administrators again took interest in Cushing’s materials. Since 2010, the collection has resided in its quietly lit, wood-paneled basement gallery, a kind of portal back in time to when humans’ most advanced knowledge of the brain came from hand-drawn sketches, photographic negatives of misshapen heads, and the organs themselves, spookily suspended in formaldehyde.

Our current understanding of the physical basis of consciousness is equally primitive. The split-second examples of sensory perception that Blumenfeld and his team have studied are a far cry from what we consider to be the essence of human consciousness, what truly makes us who we are. Even when Blumenfeld’s researchers move on into the next areas they hope to explore, like motor planning—the processes that make us kick a foot out reflexively or decide to raise an arm—their findings won’t begin to describe the limitless complexities that add up to how we each think and feel. Cushing taught modern brain researchers that progress comes gradually, through careful record-keeping and rigorous analysis. “The plan is hopefully to understand as much as possible in space and time, what happens during a conscious event,” Blumenfeld said. “To drill down to the level of hundreds—tens—of milliseconds in order to see exactly which neuronal populations are involved in a conscious experience.”

If there’s ever a museum built to commemorate the early days of consciousness research, I hope my pupils can be found in there somewhere, perhaps floating in a jar of formaldehyde.

— Matthew Kleiner is a sophomore in Saybrook College.