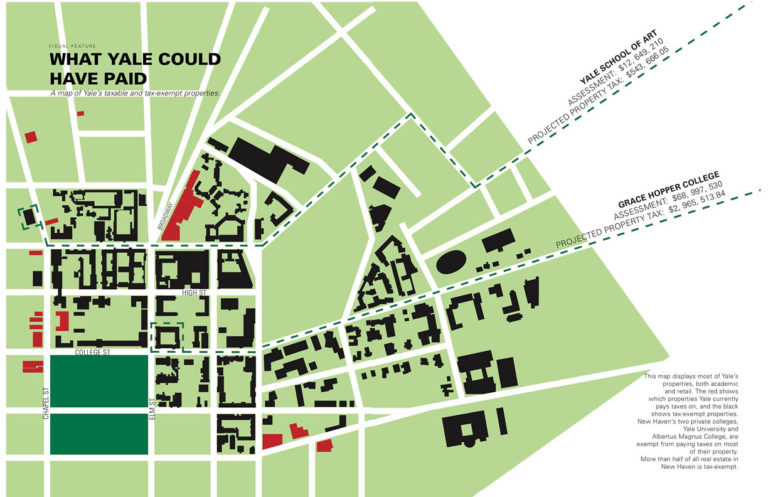 What Yale Could Have Paid

This map displays most of Yale’s properties, both academic and retail. The red shows which properties Yale currently pays taxes on, and the black shows tax-exempt properties. New Haven’s two private colleges, Yale University and Albertus Magnus College, are exempt from paying taxes on most of their property. More than half of all real estate in New Haven is tax-exempt.

Yale paid only $4.9 million in taxes in 2018, but New Haven claims the University should be paying twenty-six times that amount. In 1834, the state of Connecticut amended the Yale charter to exempt the University from local taxes on any property that makes less than $6,000 in income each year. (As a nonprofit, Yale also does not pay any federal taxes.) Over the last two centuries, New Haven has made multiple attempts to tax Yale’s property, but all have failed. Most recently, in 2016, Mayor Toni Harp and several alders voiced support for a piece of state legislation that would revise the Yale charter and enable a new property tax on Yale. Although the bill was not passed, it ignited the “Tax Yale” movement, a community campaign for a tax on Yale’s academic buildings. But Yale’s spokespeople have pushed back against new taxes, stating that Yale is one of the largest taxpayers in the city due to the taxes it pays on non-academic properties, like the Yale Bookstore and the Yale-New Haven Hospital. In addition, the University makes annual voluntary contributions of millions of dollars directly to City Hall. In 2018, it contributed just over $11.5 million to the city, according to the Office of New Haven and State Affairs.

In 1899, Yale sued New Haven after the city produced legislation that would have established a property tax on Yale’s room and board facilities. The University won the suit. Fifty-one years later, in Yale v. New Haven, the city of New Haven sued Yale for neglecting to pay taxes on sixteen buildings. In 1975, in Yale University v. City of New Haven, the city sued Yale again, this time for not paying taxes on the Yale University Press building at 149 York Street. All three times, the courts found that the stipulations in the 1834 charter still stood. Yale won all three cases, retaining the right to own tax-exempt property.

“[Yale] is the single largest local economic force in New Haven—larger than fellow nonprofits or any private corporation,” Yale spokesperson Tom Conroy told the New Haven Independent in March 2016. The amount that Yale pays voluntarily is proportionate to its on-campus population, and as Yale’s population has grown, so has the amount of voluntary payments.

Proponents of a new property tax on Yale point to the economic disparities between the city of New Haven and the University’s campus as evidence that New Haven’s deficiency in tax revenue hinders the city’s economic growth. In May 2018, Mayor Harp released a monthly financial report, showing that New Haven’s deficit was about $15 million for the 2017-2018 school year. “The noticeable difference in the percentage of the general fund increase and the [property tax rate] increase is largely a function of sharply decreased anticipated revenue next year,” Mayor Harp said to the New Haven Independent in March 2018. “The city stands to come nearly $17 million short.”

Due to this deficit, in May 2018, the Board of Alders approved a citywide property tax increase of 11 percent. Many felt this tax hike was a blow to city residents, especially those who had already been struggling to make ends meet. “This big increase is going to make a big dent in my budget,” Fair Haven resident Barbara Melotto told NBC Connecticut that May. “I’m a retired person living on a fixed income and I’m sure many people in New Haven feel the same way.”

I wanted to investigate what a new property tax on Yale would mean for both the University and the city—and whether Yale’s current economic contributions to New Haven are really enough. To show what it might look like if Yale property was taxed, I have chosen to focus on two buildings: Grace Hopper College and Yale School of Art. I chose these buildings to show what it would look like if a residential college and an academic building were to be taxed, and these properties were perfect models. Since the New Haven tax assessment database is online and publicly accessible, I was able to find the assessed value of each building.

In 2018, Yale paid $4.9 million in city taxes. By comparison, Dartmouth College, in Hanover, New Hampshire, paid $7.3 million in taxes in 2017, according to the town of Hanover’s annual fiscal report. Unlike Yale, Dartmouth has to pay city taxes on its dormitories and dining halls. A 1977 New Hampshire Supreme Court ruling named Concord v. St. Paul’s School required all private schools—including colleges and universities—to pay taxes on dorm rooms, dining halls, and kitchens. Before this case’s ruling, much of Dartmouth’s property was tax-exempt.

Before the Board of Alders approved the citywide tax hike, Mayor Harp had considered Yale as a potential source of tax revenue to avoid major cuts in government services. She requested that Yale and its nonprofit partners, like the Yale-New Haven Hospital, pay $3 million a year to New Haven in addition to the voluntary yearly payment Yale already makes to the city. Mayor Harp is still considering this as a viable option.

Yale voluntarily pays over $11.5 million a year to New Haven; the University would pay significantly more if the city taxed its currently tax-exempt property. In 2014, Yale avoided taxes on about $2.5 billion of property; by comparison, two years later, its taxable real estate valued at only $116 million.

—Zola Canady is a first-year in Trumbull College. Meher Hans is a sophomore in Grace Hopper College.