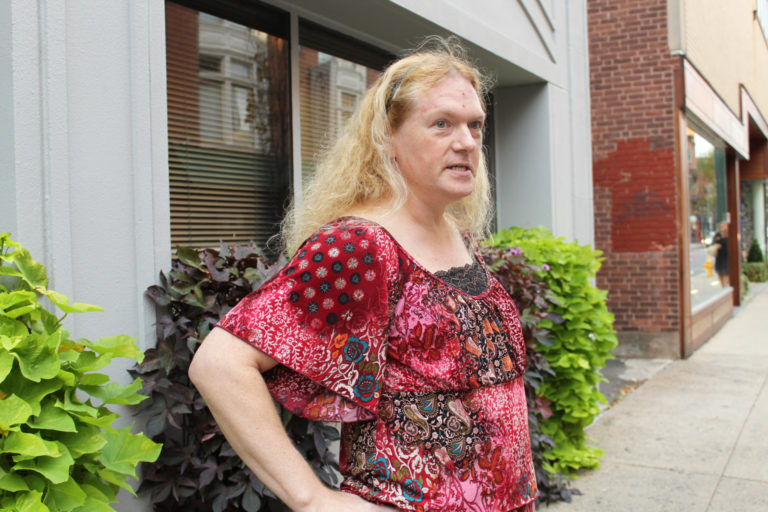 After her fourth night of troubled sleep, Urn Pendragon decided to run for mayor of New Haven. She had been weighing the prospect since a public hearing at City Hall on February 21, when hundreds of community members congregated to discuss Yale’s failure to fulfill a promise it had made in 2015 to hire 1,000 New Haven residents. Pendragon had mulled over the testimonies of her fellow New Haveners for days. After nearly two years of organizing in New Haven, this was the moment that “set me over the edge,” she recalls.

At 48 years old, Pendragon felt “political” for the first time. Up until then, she experienced life through a “mental fog” that obscured any motivation to engage politically. She attributes the alleviation of this fog to her gender transition, which acted as a kind of biological and spiritual solvent, dissolving the haze through which she had lived her entire life.

Pendragon’s relationship to her trans identity is “unique,” in her words, and arose unexpectedly. In her mid-40s, Pendragon was diagnosed with Klinefelter syndrome, which affects individuals with two or more X chromosomes and a Y chromosome. She decided to undergo hormone replacement therapy, coming out to friends and family as a trans woman. The result was instant: the fog lifted.

Before her transition, Pendragon experienced a severe bout of clinical depression linked to overproduction of estrogen and testosterone—a result of Klinefelter syndrome. “For me,” Pendragon began, “because I couldn’t focus, because of my anatomy—you’re withdrawn from the things that you truly want to do or how you want to behave. You’re stifled.” Yet Pendragon is cautious not to universalize her experience. Although her navigation of gender has been intimately linked with biology, she acknowledges that the two “can be both separate and intertwined.”

As a local activist, Pendragon seeks to “fix the problems instead of trying to outlive them.” She has lobbied in front of the General Assembly for a fifteen-dollar minimum wage and served on the Affordable Housing Task Force; she supported local civic action events, like the Stop & Shop strikes that resulted in better pay and healthcare coverage for workers; she participated in negotiations over renewed police contracts; she advocated for a state bill that created a paid family and medical leave system.

When I asked Pendragon where she wanted to meet, she invited me to a meeting with Mothers and Others for Justice, a group of New Haveners who gather to build community through activism and legislative action. Pendragon attends these meetings every month in the basement of Stepping Stone Transitional Housing on Winchester. Having taken the Yale shuttle as far up Winchester as the route allowed, I found myself before a sienna brick building, with windows partitioned into triptychs, and an ecru set of double doors that looked more decorative than functional. Following the rasp of skateboard wheels on asphalt, I wound around the building to a ramp leading into a basement, where I would find Pendragon, wearing a Nike t-shirt and pale denim, doling out side-hugs and balancing a plateful of food.

Pendragon’s eyes glowed with the phosphoric glaze of the fluorescent lights. The tendrils of wavy blonde hair that evaded her studded silver headband fell leisurely onto her face. When I asked Pendragon why she wanted to meet here, she scanned the room. There was a communal heap of rotisserie chicken and coleslaw by the door, and Audre Lorde quotes framed in the menthe construction paper that decorated the walls. Fellow activists chatted at tables, forming a ‘U’ shape around the room.

Mothers and Others was the first community in which Pendragon encountered unwavering acceptance—where her serious involvement in grassroots organizing began. Here she met people who, like her, had experienced homelessness and food insecurity. Taking a swig of apple juice, she said, “It was a really great fit for me, but also, I have a lot of friends here.”

Pendragon was born in Lansing, Michigan, and was less than a year old when her mother divorced her father. Together, she and her mother moved often across the Midwest and South. Her most salient memories linger between St. Louis, Tulsa, and the Winston-Salem area of North Carolina. Yet she couldn’t identify with the places that raised her. “It was like taking a New Yorker and shoving them in the middle of the country,” she remarked.

Pendragon moved to South Windsor, Connecticut, after graduating from SUNY Stonybrook with a Bachelor’s degree in Psychology over ten years ago, and she has stayed in the state ever since. She worked for Cablevision for five years but was one of six hundred employees laid off when the company was bought out. After taking a moment to reflect on what came next for her, Pendragon looked at me and said, “The cards stacked up in just the right order.”

Shortly after, Pendragon discovered she was eligible for a state program that subsidizes higher education for recently laid-off workers. She made an early withdrawal from her (401)k to buy a car. She arranged to live with one friend in New Haven during the week and with another in West Haven on weekends so she could attend class at Southern Connecticut State University. Pendragon was determined to get her Master’s in Political Science; she couldn’t see herself studying anything else. “Politics touches every part of our lives,” she remarked, “and I’ve been running with it since then.”

The central policy goal of Pendragon’s mayoral campaign was the implementation of an inclusionary zoning ordinance that would require 20 to 22 percent of units in new housing projects to be affordable housing. As of April 2019, she said, “twelve out of the fifteen towns in the New Haven region dip below the 10 percent threshold for affordable housing.” Pendragon presented the inclusionary zoning initiative, paired with city advocacy for solar farms, wind turbines, and other forms of sustainable energy, in her “New Haven Green Deal.”

When I asked Pendragon why affordable housing is so central to her campaign strategy, she told me that she sees housing as “the central issue of our lives.”

“You spend anywhere between 30 and 60 percent of your money to put a roof over your head. If you’re paying more than you should, which is anywhere between 25 and 30 percent, there is such a discontinuity,” Pendragon tells me. Her hands fiddle with the tassel of her purse. “For those of us who are between homelessness and being able to afford housing…it’s really no way to live.”

In the middle of the Mothers and Others for Justice meeting, Pendragon pushes her chair back and stands to make an announcement: she has decided to withdraw from the mayoral race.

Justin Elicker, who had won the Democratic primary days earlier, shares many of Pendragon’s policy priorities, such as inclusionary zoning and a bill to combat homelessness. After his victory, Elicker asked Pendragon to join his administration in an “amalgamated” position that would combine policy-making, city-planning, and economic development. Pendragon tells the crowd that she accepted Elicker’s offer. The room swells with applause.

As I walk with Pendragon to her car after the meeting, I anticipate a cast of disappointment to undergird her attitude toward Elicker. But any mournfulness she feels about the race is overshadowed by an excitement to develop an affordable housing plan under Elicker’s tenure.

I ask her if she thinks it would have been possible for her to win the race with her background. “Of course!” Pendragon declares. I notice the solar panels that shimmer on the roof of her car under the opal light of the moon. She gushes to me about an idea she has: a collaboration with a local artist to create wind turbines that could contribute aesthetically to the city and reinforce New Haven’s commitment to sustainable energy.

When I ask Pendragon why she ran for mayor in 2019, she explains, “the timing was not right before.” Prior to getting her Master’s, Pendragon lacked the theoretical framework to articulate her own experiences, something she saw as essential to her candidacy. However, even with a graduate education, Pendragon’s entry into the political sphere has presented formidable challenges. “Filling out the forms at the City Clerk office was very easy to do. That’s always accessible,” Pendragon says. But the race’s accessibility is also contingent on factors such as exposure, personal experience, and connections, Pendragon explains. Lacking in any of these areas could be devastating to a campaign, even for candidates who consider themselves “qualified.”

I think about what it means to be qualified. Is knowing how to navigate the bureaucracy and formalities of politics what makes a person qualified? Or is the stake a person holds in the issues they are fighting for, and an intimate knowledge of those issues, also of value? Pendragon’s mayoral run carried a personal urgency missing from her former competitors’ campaigns; she and her community are the ones primarily affected by the consequences. This is where the power in her activism lies. For Pendragon, waiting to outlive these issues is not an option.

—Hailey Andrews is a sophomore in Pierson College.