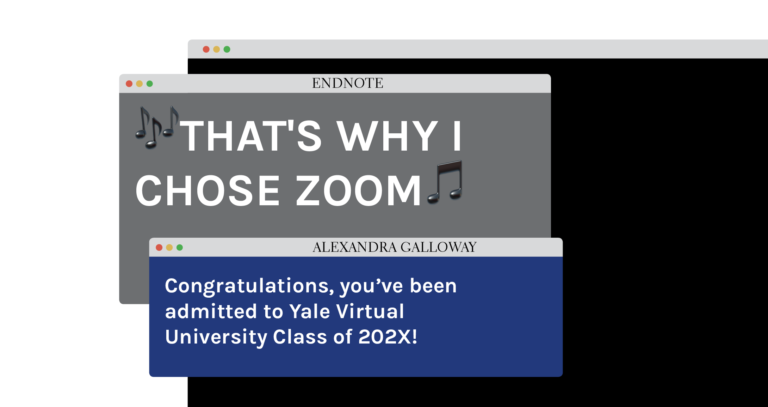 That’s Why I Chose Zoom

Behind my classmate, I can see the golden glint of Pierson Tower as the sunlight hits it just right. She’s studying in the Davenport courtyard—the grass a sea of emerald, the paint on the spire blindingly white and her hair aglow in the sunshine. I almost believe that I am back at Yale––until the disembodied voice of another classmate interrupts the illusion created by her virtual background. His video is off; I fixate on the letter “S” that fills the screen in lieu of his picture. Welcome to Zoom University.

Since late March, Zoom, a video-conferencing platform, has become an integral part of our lives. It has replaced many of our communal spaces, offering a new means of virtual connection as we shut down public life and isolate ourselves in order to fight COVID-19. Jimmy Fallon hosts celebrity guests over Zoom. Parents call into work from their dining room tables over Zoom. Friends grab bottles of wine and reunite for Zoom happy hours; long-distance couples Netflix and Zoom. Strobe lights flash and bass booms as students sign in to Zoom dance parties and jump around their childhood bedrooms.

In the realm of academics, Zoom has transformed how students engage with professors and with one another. Eric Yuan, CEO of Zoom, reported in early April that over ninety thousand schools across the world were using Zoom and that over two hundred million people were using the platform daily. Instead of meeting in seminar rooms and lecture halls, students and professors are now logging into class from across the world, across time zones, and across backgrounds, offering new opportunities for engagement but also new challenges. Students joke that they are now students at Zoom University, even designing sweatshirts and t-shirts to show school pride.

Yet for all the jokes, Zoom seriously strains Yale students’ sense of community. To me, the Yale experience is defined by racing to be first-in-line for Pierson College’s breakfast for dinner, sharing Kookie Monster donuts with my friends at Donut Crazy, late nights dancing and laughing at the local nightclub Toads, and collective suffering in Bass Library. When that is gone, what are we left with? Can Zoom fill that void in any meaningful way?

“Hestia, you ready?” Stephen Latham, professor of Yale’s popular course Bioethics and Law, asks his cat, at the beginning of a pre-recorded Zoom lecture. His hair is silver and tousled as he raises his cat like Simba in The Lion King. Her white paws splay out to her sides and she looks straight into the camera with bright green eyes.

“Go!” he says. But instead, Hestia jumps out of his lap and saunters to the door with a meow. “We went over this. Alright, go out, but you are definitely not getting the salmon.”

Latham sits again and sighs, “Very unreliable cat,” before launching into a fifty-minute lecture. At the beginning of each lecture, Latham makes his students smile with short skits, ranging from him listening to K-Pop songs to him chiding a stuffed animal for its prolonged screen time.

Cormac O’Dea, a professor of economics at Yale, is also grappling with the new reality of online instruction. Given his discipline, he’s more than familiar with the allocation of scarce resources—but he never expected that his home Wi-Fi would become one.

Over 120 students join his Zoom lectures on Introductory Microeconomics each class, so every Monday and Wednesday from 1:00 to 2:15 p.m. he has to monopolize the Wi-Fi in his house. “In choosing my Wi-Fi package, I did not imagine this particular scenario,” O’Dea laughs over our Zoom call.

Teaching over Zoom certainly poses more difficulties than just Wi-Fi. Like many other professors, O’Dea has had to adapt to a new way of teaching and engaging with students through Zoom.

Normally while lecturing, O’Dea can look out into the audience and gauge student reactions, but now it is much harder because students have to turn off their video in lecture to conserve his Wi-Fi. He cannot tell whether students are smiling when he uses Vizzini from The Princess Bride to explain game theory, or whether students are following along when he is lecturing on Pareto Efficiency and the Second Welfare Theorem.

“You can’t see if the students are interested, bored, excited, or confused,” O’Dea said.

To overcome these hurdles, O’Dea has kept an open mind and found new ways to keep paths of communication open, including encouraging participation in lectures through interactive activities like break-out rooms, open polls, and a suggestion box linked on Canvas. “This is as new for me as it is for you folks,” O’Dea said, “I don’t have the presumption that I know how to do this.”

O’Dea has also adapted the content of the class to the current crisis. At the start of each lecture, he shares economic news related to the pandemic. “It is important for us as instructors and students to engage in the world around us and [understand] how this crisis is affecting people other than ourselves,” O’Dea said.

Although he was worried at first that students might not want to hear about the pandemic in class, ninety-five percent wanted him to continue, according to an in-class poll he conducted. He finds it important to remember how the crisis is affecting not only the world but also our community. “For many students, this is not just abstract; this is affecting them and their families intensely,” O’Dea said.

Students are facing an overload of barriers to full academic participation in online classes, including responsibilities at home, sick loved ones, lack of reliable internet or technology, having to get a job, worsened mental health, and vast time differences, according to a recent poll conducted by the Yale College Council. These obstacles, while experienced by every student to some degree, are felt most acutely by first generation, low income, and international students.

When Keigo Nishio ’21 found out that Yale was moving classes online for the rest of the semester, he was shocked. He did not understand how he was going to overcome the thirteen-hour time difference between New Haven and his home of Osaka, Japan. Since then, Keigo has found a tenuous balance between school, work, family, and sleep.

Keigo starts his school day off at midnight. He attends his classes until 3 to 4 a.m., works as a teaching assistant for a couple hours, and then only sleeps one to two hours a night. He cooks breakfast at 9 a.m. During the day, he has meetings, chores, and homework, and he tries to nap in whatever spare hours are left.

Despite the challenges posed by the time difference, he has felt supported by Yale faculty. “Luckily, my professors were all so accommodating,” Keigo said, “I really appreciate my professors.”

Most of his professors started recording class so he did not feel obligated to stay up, but he also appreciated his professors’ care and consideration. They often reached out to check in, his anthropology professor even dedicating time in lecture to reach out to see how his students were doing.

“We, both students and professors, are now required to consider and accommodate our diverse needs, which is actually an essential thing even at normal times,” Keigo said, “I hope this mutual care will continue, even after the pandemic is contained.”

When I asked Keigo how he has enough energy to get through the day, Keigo said, “I don’t know.” He paused. Then, with a laugh: “Somehow it works. Everyone has their own way to deal with things.”

Beyond the classroom, students have tried to deal with this jarring disruption in their lives by reaching out to one another. Almost six hundred thousand people have joined the Facebook group Zoom Memes for Self Quaranteens where students commiserate with each other through TikToks and memes, and immortalize moments of levity. Over Facebook, students have worked together to make masks and support medical staff. No Fail Yale, a student driven movement to fight for a universal passing grade for all Yale College courses, mobilized students internationally to organize and fight for educational equity.

Yale students have also tried to preserve traditions through Zoom. Secret societies tap with furtive Zoom invites instead of their traditional nighttime congregations. Political parties of the Yale Political Union debate from their kitchen tables. Instead of visiting Yale, wandering around in the cold, and bouncing from extracurricular booth to booth to find pizza, prospective students now participate in “30 Bulldog Days of April,” featuring a new master class or information session each day.

One of the most renowned student traditions at Yale is Woads. Every Wednesday night, the local nightclub Toad’s Place closes the club to everyone except Yale students, serves penny drinks, and offers free and reduced admission. Even though students are spread out across the world and social distancing, the tradition has not died out.

Victoria Bonano ’21 hosted a Woads event over Zoom––what she calls Zoads. “Zoom… provide[s] a platform for all of us to come together and hang out, as we usually would while in New Haven, despite being so far away from each other at the moment,” Bonano said.

Her co-host Paulina Halley set the mood with Sound Activated DJ Lights and a DJ controller. Students joined from their bedrooms, from the basements of their fraternities, and from all around the world, including New York, New Haven, Illinois, California, Puerto Rico, Mexico, and Chile.

“One of the hardest things about not being on campus has been missing out on many big events all of us were looking forward to, like birthdays and formals, as well as day to day activities, like study dates and GHeav runs with friends,” Bonano said, “Woad’s represents a mid-week study break with our friends that we look forward to every Wednesday, so we hosted Zoad’s to try to keep some sense of normalcy and fun during these times.”

It was not quite the same––there was more laughter and chatter than at a typical Woad’s. But it made sense that people wanted to talk. After all, it was the first time many of them had seen each other since they had gone home for spring break.

I am not sure if Zoom can ever approximate what it feels like to be at Yale––to trudge up Science Hill in the icy slush to get to physics study hall, to wander around campus at night drinking bubble tea, to look up and see Harkness Tower and wonder to yourself, “How the hell did I end up here?”

But in the small, precious moments of Zoom, when my friend calls me from across the country to try to wake me up for class, when our professors’ children sneak into lecture behind them, when a brave soul in your lecture uses Club Penguin to explain game theory––in these moments, the distance becomes almost bearable. Yale, with all its ups and downs, does not seem so far away.

— Alexandra Galloway is a first year in Davenport College and an Associate Editor of The New Journal. 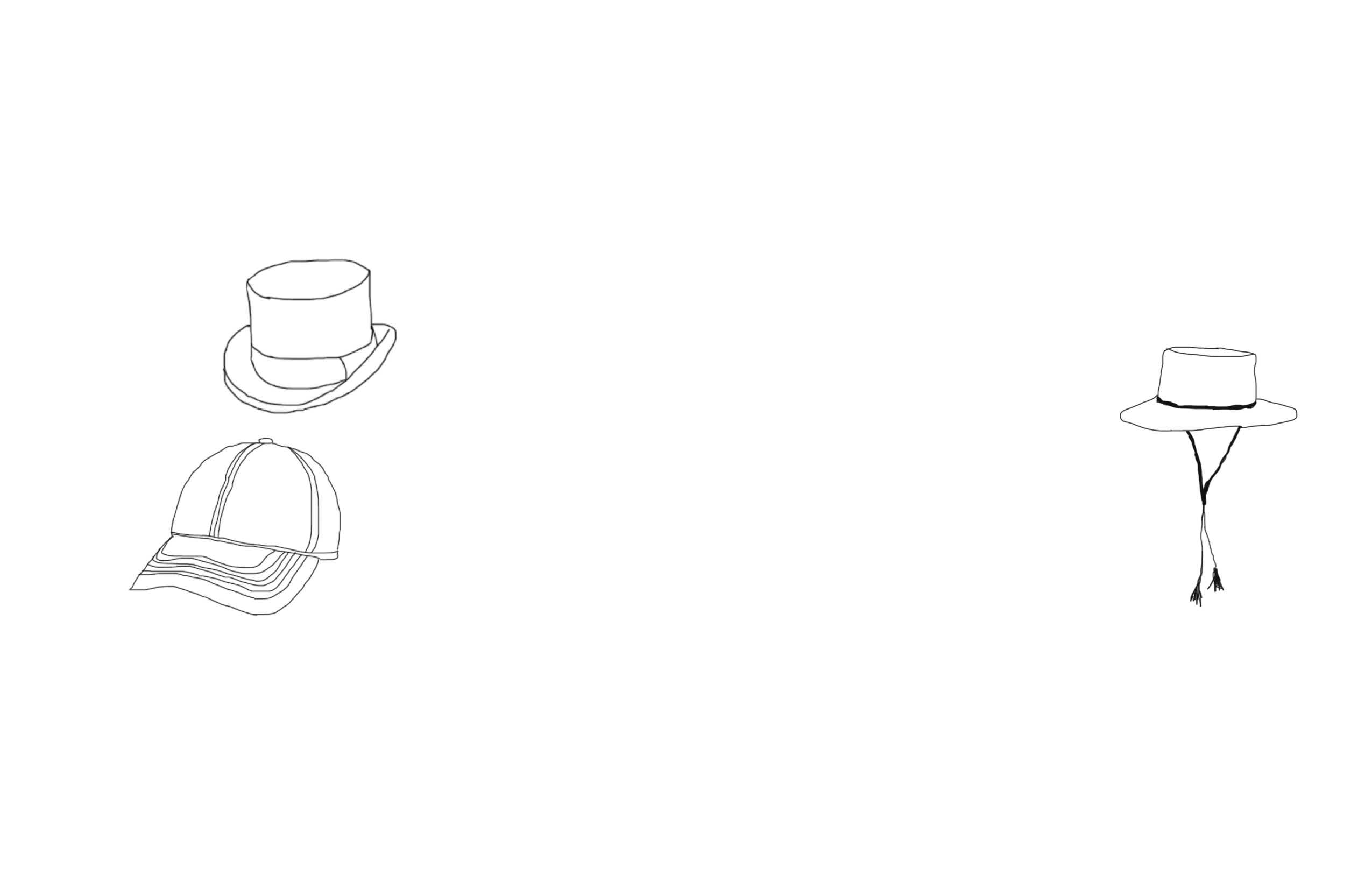 A Good Hat is Hard to Find