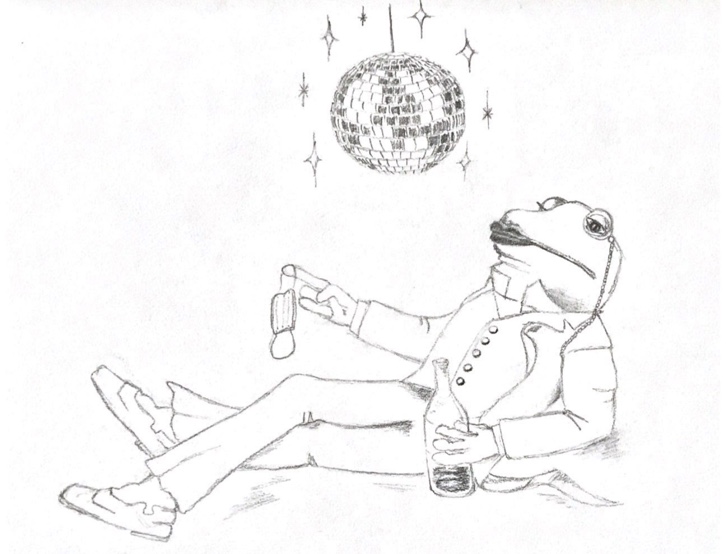 At about 9:45 PM on a Wednesday night, you can find Pierce Daly ‘23.5 scouring the depths of Bass Library. And no, it’s not because he can’t figure out the last question on his econ problem set due tomorrow morning (well, maybe he should focus on his pset). Daly, procrastinating whatever homework is still on his docket, strolls around the library in search of Yalies craving a midweek adventure.

A Toad’s Place aficionado since his first Wednesday at Yale, Daly considers himself a “Woad’s (that is, W-ednesday T-oad’s) loyalist.” And Daly is the perfect candidate for the Woad’s Scholarship (a title bestowed upon Yalies who attend every Woad’s dance party of the school year). A social butterfly, Daly is a household name among the Class of 2023. “I’m the only one of my  friends who makes an effort to go every week,” Daly said.

As soon as his last Wednesday class ends, Daly begins plotting his adventure. Ready to cash in nights under Bass’ fluorescent lights for Toad’s glistening disco ball, Daly begs his friends to put down their pencils, shove their dying computers into their stuffed backpacks, and make a beeline for the always reliable Farnam pregame. After scouting the ideal group, usually composed of a few friends and a handful of randos, Daly emerges from Sterling’s main entrance — crew by his side, homework on the brink of completion. Infatuated by the thrill of post-Toad’s 2 AM homework sprees in a stupor, Daly walks down York St. with a new group of Woad’s hopefuls every Wednesday night.

Nothing can deter Daly from making the trek to Woad’s. In sickness and in health, Daly once vowed to attend every Wednesday dance party — even when midterms loom large. “I’ll do my best to drum up some business if I’m really hankering to go,” Daly said, laughing.

When Daly approaches the bouncers at the door, he’s hoping for a night “busy enough that [he’s] always meeting new people but empty enough to prevent suffocation.” But now, 81 miles away from York St, Daly reflects on what once was — his Wednesday night routine shared with Yalies yearning for a serendipitous break in the workweek. In a country forever changed by nearly nine million COVID-19 infections, nights standing shoulder-to-shoulder with fellow Yalies on Toad’s stage feel worlds away.

COVID-19 has decimated small businesses across the country. As of August, 163,735 U.S. businesses have closed their doors, and Connecticut’s small businesses are lobbying for $70 million in grants. According to Moody’s/CNN’s Back-to-Normal Index, Connecticut’s economy is currently operating at 88 percent of what it was prior to the COVID-19 lockdown, which began in mid-March. But the reality on the ground — a boarded-up Toad’s and a deserted York St. — feels apocalyptic.

As we approach the end of the year, the Independent Restaurant Coalition is sounding the alarm, warning that if no progress toward a deal is made, 85 percent of local bars and restaurants will have to close their doors by 2021.

As of October 8, Connecticut transitioned to Phase 3 reopening — allowing bars, restaurants, and other businesses to increase their indoor capacity to 75 percent.

But the Toad’s Daly and his fellow Yalies remember is hinged upon closeness, which has prevented its reopening. What’s more is that the bailout Phelps is counting on shows no signs of coming: The looming federal relief bill seems distant to Phelps and other small business owners, leaving Toad’s — a bar dependent on cramped, clammy dance parties — in limbo.

Todd Kaplan ‘86 can recall Toad’s stuffy odor like the back of his hand. “I bet it still smells like beer,” Kaplan said. “It’s as if all the furniture had been soaked in beer for the past 100 years.”

Daly saunters over to the dance floor and is acutely aware of one thing and one thing only: He probably won’t remember much about Woad’s come his 1 PM class tomorrow afternoon. While Daly can’t call to mind which cheesy throwback songs DJ Action spun from the Lilypad, he can still remember “Woad’s [being] such a hodgepodge of people.”

But it used to be even more of a mixed bag. “It was a nice blend of people from school and locals,” Kaplan, who was captain of Yale’s swim team, recalled. “While it wasn’t everyone’s cup of tea, it felt pretty good because I grew up there.”

Toad’s wasn’t always a haven for Yalies in search of a Wednesday night escape; Kaplan was a Toad’s regular even before his admission to Yale. Growing up in North Haven, Kaplan started hopping at Toad’s as soon as he passed the road test at age 16. “You had to work hard to get carded,” Kaplan remembered. “When I was in college, the drinking age was 18, and nobody gave a crap.”

Priyanka Jain ‘23.5 also grew up a few towns away from Toad’s. But, as Lawrence pointed out, times have changed since Kaplan, his high school buddies, and locals alike chugged penny drinks together. Unlike Kaplan, Jain wasn’t a Toad’s regular until her first-year at Yale.

“I was almost a Woad’s Scholar first semester,” Jain proudly asserted. “I missed a few during the second semester because I was a little more focused on my studies.”

But when Kaplan was a swimmer in Ezra Stiles College, Toad’s wasn’t yet famous for its hump day dance parties. Toad’s Place owner Brian Phelps isn’t quite sure how Wednesday nights were codified as Yale tradition, but he thinks it became routine 15 or so years ago.

Musician Rohn Lawrence, who completed a ten year residency at Toad’s, cites the drinking age increase in 1984 as the catalyst for the bar ’s collegial relevancy. “Toad’s was always influenced by the surrounding colleges to a certain degree,” Lawrence conceded. “But the thing that put a damper on [local turnout] was when the drinking age changed.”

Raising the drinking age posed a high, but clearable, obstacle to the local hot spot. Prior to this law, local bands headlined concerts, attracting a younger crowd to Toad’s. As the drinking age increased, underage patrons were barred from attending these concerts, decimating both the local band scene and bars reliant on a younger clientele. “The state changing the drinking age not only made it hard for a lot of businesses, but it killed a ton of local bands,” Lawrence said. “A lot of their draw was [aimed at] 19-year olds, so this forced many bands to break up.”

But Toad’s couldn’t sit idly by. In response to this new law, Toad’s began booking DJs, a cheaper alternative to bands, for dance parties. The shift toward dance parties and away from what Toad’s was initially known for — hometown music groups — ultimately drove locals out and Yalies in, Lawrence recalled.

And thus, the pinnacle dance parties Daly dreams about while banging out a ten pager in Sterling’s stacks were born.

Surprisingly, Kaplan wasn’t entranced the York St. staple’s star-studded performances. “They occasionally had music; most of it was pretty bad,” Kaplan laughed. “Every once in a while, it was alright.”

As Phelps recovered from knee replacement surgery last summer, he found himself reflecting upon Toad’s influence on the Elm City. Over a year later, Phelps is now teaching his own history lesson of sorts on Toad’s: With the help of New Haven Register staff reporter and columnist Randall Beach, Phelps is penning a book about Toad’s’ “vast history” that is slated for release sometime next year. “When I started working with Randy, I gave him 42,000 words to work with,” Phelps said.“My favorite part of writing is when I start thinking about all the different things that [have] happened here over the years.”

After listening to Phelps’ writing methodology, it’s safe to say he lives and breathes Toad’s Place. But had Phelps not crossed paths with Toad’s former owner Mike Spoerndle (affectionately called “Big Mike”) 45 years ago, he would’ve never wound up in what has become the most defining adventure of his life.

One night in 1975, Phelps and his friends were playing poker in Phelps’ karate school on Broadway when someone broke down the front door and stole the studio’s sign. Immediately, Phelps and his friends ran around the corner and found their sign and the culprit in front of Toad’s. “My buddies were gonna get in there and go after him,” Phelps remembered, but then, Spoerndle intervened and called the cops.

Although Phelps “never saw a nickel” for the damages incurred by the altercation, a lifelong friendship with Spoerndle was born that night. “We were best friends right when we met,” Phelps said.

And soon, the rest would be history: Phelps started working as Toad’s manager in October 1976. But in January 1995, Spoerndle left Toad’s due to substance abuse issues, leaving Phelps at the bar’s helm. Despite cutting business ties, Phelps stayed “right [by] him to the last few years.”

Spoerndle passed away after his battle with substance abuse in 2011.

Fast forward 44 years, Phelps doesn’t think he could’ve dreamt up a reality even comparable to the one this country is grappling to understand. “Nobody really knew what to expect,” Phelps said. “You know, we haven’t had one of these in 100 years. God, I thought this was gonna be shorter.”

Yalies like Daly and Jain — and alums like Kaplan— are also concerned about the bar’s uncertain future. “I can’t imagine my Yale experience without Woad’s,” Daly said.

With no decisive end to social-distancing nor a vaccine approved for public use, Phelps had to reassess Toad’s’ future.

But after nearly half a century of penny drinks and dance parties, Phelps has every intention of keeping Toad’s afloat: Inspired by “the resiliency of humanity,” Phelps is optimistic that a vaccine, which some experts say will be rolled out to the public before the end of this year, will get the club hopping again. “I have enough reserves to go until fall 2021, and I have a tremendous amount of equity in the building,” Phelps said. “I’d like us to get to 50 years and beyond.”

With that said, a study conducted by Harvard University indicates that social distancing might be the norm through 2022. Regardless of the uncertainty ahead, Toad’s hopes to throw private parties in accordance with Connecticut COVID-19 guidelines until it’s safe to pack Yalies back onto its sticky dance floor. And Lawrence is hopeful that, with Phelps at the helm, the York St. classic will stay afloat. “Brian has a lot of capital: He can hold it down for a long while,” Lawrence said.

Phelps was also hoping to host sit-down concerts, but state regulations prohibit singers from performing indoors. Phelps is now thinking about doing a free virtual send-off, show for Yalies around Thanksgiving. “Maybe people would like to dance around in their own rooms for an hour or two,” Phelps said. “This is all we can do: Nobody wants their students in large gatherings [nor] dancing around together.”

Although this is far from ideal, Phelps has found a silver lining or two: All this extra time has allowed him to focus on polishing his book and fixing up Toad’s basement. Amidst all the ambiguity the pandemic has cast over everyone’s lives, one thing’s for sure: “Toad’s won’t change what [they’re] doing,” Phelps said.

COVID-19’s shock waves don’t just threaten Yalies’ Wednesday night escapades. Toad’s walls whisper New Haven’s very history and, by extension, Yale’s fraught yet attempted reconciliation between itself and the city it attempts to coexist with. And COVID-19 stands to sanitize the stale beer stench Kaplan so fondly recalls, put an end to Daly’s excursions to York St., and threaten Phelps’ livelihood. But only time will tell what the future holds for Toad’s Place. Until then, memories will have to suffice.

—Julia Hornstein is a sophomore in Ezra Stiles College.