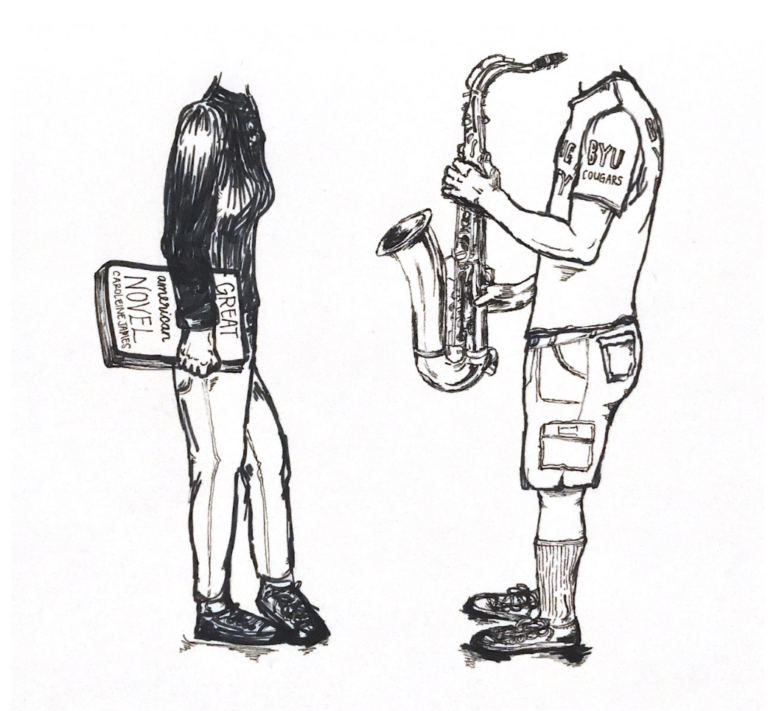 When I was in middle school, back in Salt Lake City, my saxophone teacher used to recline in his ergonomic wheelie chair, rest his interlocked fingers on his gut, and tell me I was special. Sometimes, he would spend the entirety of our allotted hour telling me so. Caroleine, you’ve got a gift. Caroleine, you’ve got style. Caroleine, your tone is exceptional. This pedagogical approach irritated me, not because it was unhelpful, but because it was redundant. I already knew I was special. I was the most complex, interesting, talented, attractive person in my acquaintance, possibly the entire world. When Kate Moss was fourteen, she had bow-legs and crooked teeth. When Joseph Smith was fourteen, he couldn’t even spell “arithmetic.” At fourteen, I had clear skin, a 4.0 GPA, and the biggest boobs in my immediate family. I could (and often did) use “defenestrate” in a sentence. My theophany was just around the corner.

To pass the time until cosmic forces swept me into a new life, my teacher encouraged me to audition for Caleb Chapman’s Little Big Band. Caleb Chapman was Glenn Miller for Mormon kids. His twenty-two-piece youth swing band practiced forty-five minutes south of Salt Lake in a beige building wallpapered with awards, commemorative plaques, and gushy newspaper articles. On the first day of rehearsal, Caleb told the rhythm section to give him a twelve-bar blues. Twelve-bar blues is a basic chord progression that spits you out where you started. Jazzified John Jacob Jingleheimer Schmidt. Caleb pointed at the kid next to me, the first chair alto saxophone. (I was sure this was a clerical error. He was in my seat.) I didn’t know it at the time, but his name was Evan Hatch.* He was twelve years old with skinny calves, skinny ankles, skinny arms, and long, skinny fingers. Poor sacrificial lamb.

He stood up and took a deep breath.

Usually, young saxophonists sound strangled. Their facial muscles struggle to prevent their bottom teeth from gouging their lower lip. You can hear the struggle. You can hear the gurgle and buzz of excess saliva, the uncertain tongue, the lag time caused by groping fingers and a groping brain. Their teeth put pressure on the reed. The reed squeaks. Their swing is “ricky-ticky:” an onomatopoeic term for stilted spaces between notes. They’re in the dark, eyes closed, frantically stringing together one sound after another. Not all young saxophonists, however, are “usual.”

Evan’s tone was steady, full, and bright like a bell. He flung glissandos into the air and they sounded celebratory. His notes came to a point, they rose, they fell, they obeyed the dictates of comic timing. Imagine a beloved yet assertive uncle telling you a story he’s told a million times before. A good saxophone solo is like speaking without words. Evan spoke.

After Evan sat down, Caleb pointed at me. The chk chk chk of the drums was deafening. I tried to recall some shred of wisdom from my teacher, but all I could come up with was, “Caroleine, you’ve got a gift.” To me, music was a piece of paper with notes on it, handed down by a higher power and polished in advance through intensive practice. None of this off-the-cuff, stand-and-deliver nonsense. I sat out the jam session.

From that day onward, Evan Hatch ruled my mind. He didn’t know it, but the two of us were locked in mortal combat: he, the cruel musical tyrant, I, the lovable and soon-to-be-triumphant underdog. I started practicing every day. I practiced in the basement and in my grandpa’s car. I ran scales like I was supposed to, worked my long tones, did that weird little waaaaahyayayayaya vibrato exercise. I practiced with a stack of Jamey Aebersold books. After Jamey’s monotone “Ah one. Ah two. Ah one. Two. Three. Four,” I would offer up a joyless rendition of “Song For My Father.” I didn’t know if I was getting better because I couldn’t hear myself. My deafening inner monologue drowned out the sound of the chord changes: what’s the third in Eb7 wait don’t play the third that’s too obvious wait you missed it now we’re in Db7 what’s the third in Db7 wait.

The band met every week. After a couple of months, the rhythm section was “in pocket” and the horns “attacked together.” One afternoon, Caleb paused rehearsal to ask each student who their musical inspiration was. Michael Brecker, Max Roach, Dave Brubeck, Wycliffe Gordon, Freddie Hubbard. . .  Sitting there, listening to the litany of unfamiliar names, I realized that I didn’t know beans about jazz. I could name one jazz song I enjoyed (“Minnie the Moocher”), and that was only because it included the word “hoochie-coocher.” Evan liked Kenny Garrett. Evan Hatch, seventh-grader from American Fork, UT, actually listened to experimental 90’s post-bop with titles like “Sing a Song of A Song.” On purpose.

Saxophone was my fourth favorite hobby. The coveted first place spot was reserved for standing naked in front of the bathroom mirror and pretending I was on Jimmy Fallon.

Evan Hatch was unaware of my underdog narrative and selfishly refused to conform to it. First of all, he was two years younger than me—a big difference when you’re in middle school. Second of all, he was a nice person, the kind of nice you have to be when you have ten siblings. His laughter was high-pitched and frequent. He wore a uniform, cartoon-character style: thick-rim glasses, Brigham Young University t-shirt, tan cargo shorts, white tube socks pulled all the way up. He was sweet. And I hated him anyway.

The Little Big Band experience culminated in the Peaks Jazz Festival, an annual event that drew musicians from all over the country. Peaks was my last shot to turn my jazz career into an inspirational drama à la Chariots of Fire. Initially, I planned to play the most exquisite alto-sax solo ever to grace human ears, the kind of solo that would make Charlie Parker rise from his grave, hand me a Selmer Mark VI, and tell me, “You’ve got it, kid.” As Peaks approached, my standards dropped. A month away, I was willing to settle for making Caleb cry — still a difficult feat since big band solos are only twelve bars. A week away, I had pared down my goal to “I will play a solo that doesn’t make the audience walk out en masse.” The night before the concert, I decided it would be better for everyone if I didn’t play a solo at all. I found myself back where I started: sitting meekly in second chair, listening as Evan caressed my cheek and tucked a stray piece of hair behind my ear. Musically, of course. Music was the only sexy thing about him.

He was too squirrelly to oppress me, too comical to bully me, too talented to lose my imaginary competition.

Evan, if you’re reading this, no hard feelings, okay? You can have jazz. It’s a dying art form anyway. Plus, I’m going to write the next great American novel.

— Caroleine James is a junior in Branford College.