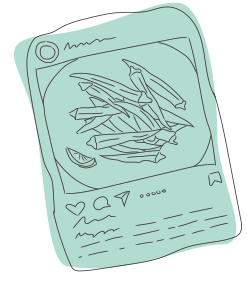 Instagram chile oil isn’t too spicy, Instagram birria is vegetarian, and Instagram paletas don’t melt. On the social media accounts of chefs, restaurants, and food magazines, food exists in a hyper-distilled form––smell-less, taste-less, free, and in quantities greater than any person could ever eat at once. It can be consumed visually over and over again, with captions that evoke taste by flagrantly overusing adjectives: A scallion dressing is “scalliony,” pudding is “milky,” bread is “pillowy.” Bizarre combinations don’t sound too bad at all: a dense, floaty, chocolatey, cardamom-inflected stew. A snacky tangle of sugar-dusted cabbage and sweet-sour yogurt. The best food pictures are messy in a way that suggests abundance: overflowing sandwiches or tall scoops of ice cream dripping a little down the cone, but not enough to make your fingers sticky. You can eat breakfast and lunch and dinner from five different restaurants, because you never get full when you’re eating on Instagram. Nonetheless, even in pictures, food carries a heavy cultural weight. The things we eat can’t be separated from their history and politics, even when stripped of their physical form.

As Annie Cheng ’20, who now works as a cook and researcher in upstate New York, pointed out, Instagram can be an important equalizer for new and small businesses. “Instagram and social media has been a very democratic place for chefs, who don’t have investors, to have a voice,” she said. Not everyone can buy a multi-million dollar restaurant space, but a camera and some good lighting are pretty easy to come by, and new restaurants can advertise on social media for a fraction of the cost of a TV spot. Cheng also discussed additional pressures placed on chefs of color, including the implicit assumption that their food will be cheap, or will recreate some kind of photo-friendly street food experience. “People say their food should be two dollars,” she said. “White chefs don’t get docked for experimentation.”

For better or worse, social media imposes a new kind of structure. Almost any food that makes it to the platform is palatable to the eyes, which generally means it’s been aesthetically flattened, placed in front of an art wall or held up against a skyline. In Restaurant Business’s 2020 article “Easing Into Ethnic Eating,” a guide for “getting customers on board with emerging cuisines,” the first tip is to make the food “visually appealing.” The author quotes the owner of a Balkan restaurant who has learned to take a “visual-first” approach, plating dishes alongside colorful sides and posting pictures on Instagram. “The city has a lot of traditional mom-and-pop Balkan restaurants, but I wanted to give the food a contemporary spin—make it inviting while keeping the integrity of the dishes,” Loryn Nalic told the publication. Her St. Louis restaurant, Balkan Treat Box, regularly posts pictures of their flatbreads on beautiful wooden boards, and has an astounding fourteen thousand followers.

While the internet has no shortage of cappuccino pictures, most online food content features what’s traditionally called ethnic food in the United States––food that’s often cooked by immigrants and their children. An informal survey by Chef’s Pencil in February showed that the top food hashtag on Instagram is #JapaneseFood, followed by #ItalianFood, with #IndianFood, #KoreanFood, and #Thaifood coming in third, fourth, and fifth. The prevalence of ethnic food on Instagram implies a need to reassure white American customers that something that sounds different can still be delicious, a sort of visual verification of the unfamiliar.

In addition to her work, Cheng runs her own Instagram, @achg.kitchen, which has a loyal following of Yale students and food professionals. Although she posted stand-alone pictures of food fairly frequently before the pandemic, on March 18, 2020, she debuted a new kind of post, focused on food history and critical analysis. The first slide is a picture of crispy, roasted okra next to two lemon slices. Four screenshots of her Notes app follow, which taught me that okra has been traced as far back as twelfth century Ethiopia and was brought to the Americas by enslaved people. In the post, Cheng explains how fat politics and race intersect in traditional Southern cooking, which often incorporates okra. As she points out, the “‘health-oriented’ food shaming” associated with Southern food like fried chicken is rarely applied to food from other cuisines with similar nutritional content, such as Eggplant Parmesan. Other posts reckon with the history of takeout and the presence of anti-Blackness in Asian immigrant-owned restaurants, rice cultivation and climate change, and “the mid-2000s bacon obsession.” By putting the description front and center instead of relegating it to a caption or the comments, Cheng makes it clear that food is inseparable from its roots, connotations, history, and production. What we actually eat is layered behind pictures and captions. “A huge proportion of Americans are related to the food industry,” she said. “And we all eat.”

The scoops of edible cookie dough on my feed were scooped by someone, and the sugarcane for the sugar inside it was also harvested by someone, and that sugarcane plant was brought from Southeast Asia to China to Portugal and then to Brazil and finally Louisiana, where indigenous and African people were enslaved in order to produce the “white gold” that, years later, ended up inside the edible cookie dough that never goes bad on Instagram.